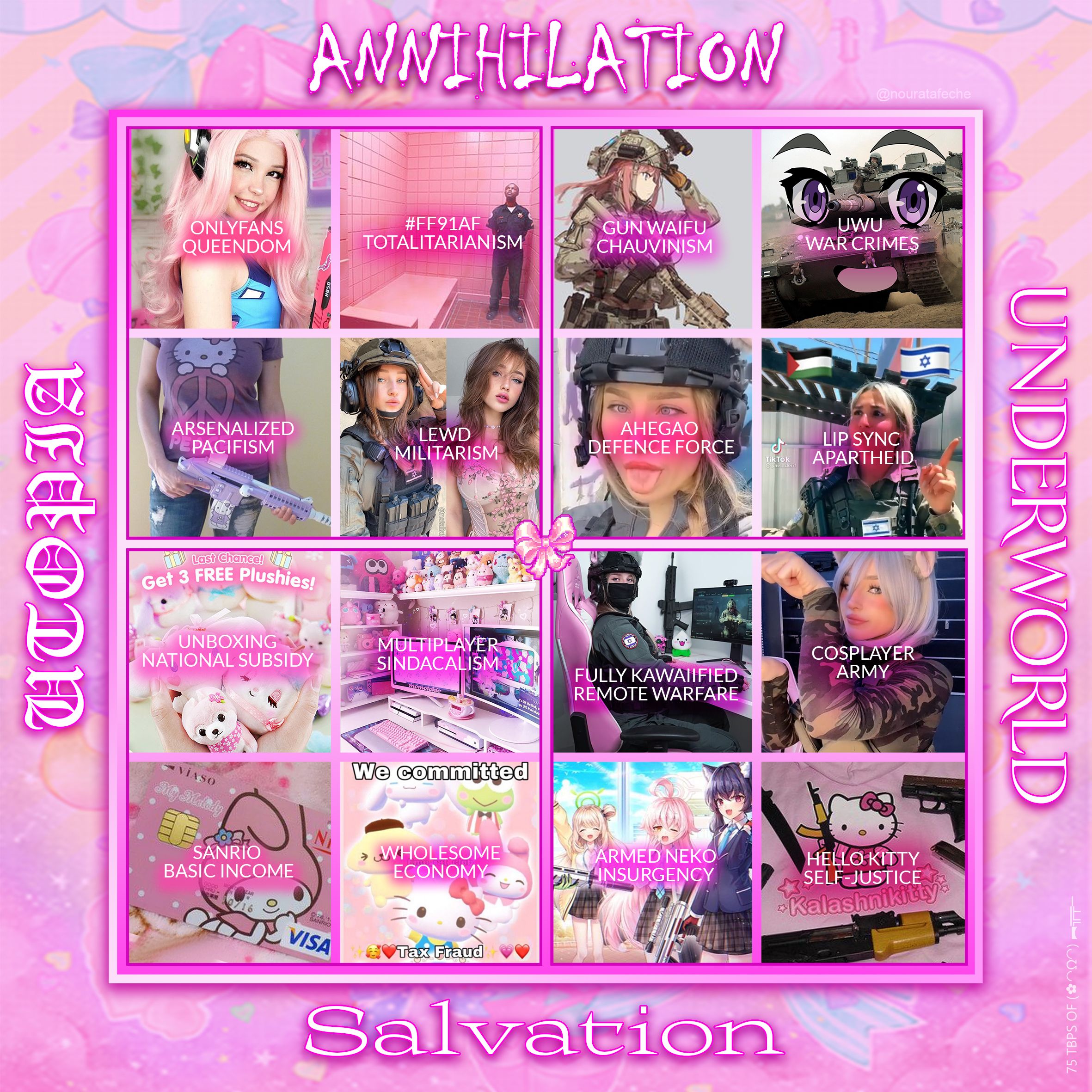 I often try to guide myself into a compass-lacking image's digital ecosystem, or what is more and more resembling an online visual culture purgatory.

The overproduction of self-imagery, the hypersexualization of militarism and kawaii commodified fetishism are developing an elusive perceptive reframing of violence, cuteness embedded in extremism.

The virtual space, already flooded by ASMR, #fyp, challenges and other amenities are merged with Army official accounts manufacturing and perpetrating old ideologies on the latest digital platforms.

The current state of the art unfolds a reckless descent towards a quasi-irreversible semantic shortcircuit.

The intersection between tenderness and violence is getting rapidly unsettling. It becomes increasingly difficult to explain but clearer to visually represent that paradoxical and gloomy interconnection.

The ‘75 Tbps of ( ω ) ✿◠ ◠ ︻╦╤─’ politigram is the result of a grotesque at times disturbingly realistic experimentation of remixing imaginaries that are emerging but reluctant to be filed under our usual taxonomies : on the horizon stands the rise of a new alien planet, whose physical laws alternate tensions between human rights violations and OnlyFans streamers, unboxing and sniping, #pewpew and #militarycurves, war and ahegao.

Arsenalized Pacifism : Establishment of a conciliatory, pacifist society respectful of the Second Amendment (globally extended to every countries constitutions)

Onlyfans Queendom : Everyone kneels before only one Queen and her personal Snapchat. NFSW streams are part of compulsory education. Citizenship can be renewed as a monthly subscription.

Unboxing National Subsidy : The gov provides paid grants in the form of a refund of income tax according to the numbers of Kawaii unboxing video routines streamed monthly.

Hello Kitty Self-Justice : Police are abolished. Society is organized through the cutest cooperative system of private justice (ෆ˙ᵕ˙ෆ) "A kawaii regulated militia, being necessary to the wholesomeness ♡ of a State, the right of the people to keep and bear Kalashnikitty, shall not be infringed"

Multiplayer syndicalism : Gamers united. Trade union advocates for the rights of gamers to strike during both remote controlled military operations on the battlefield and Call of Duty labors' sessions. Claim for self-automated drone driven operations.

Lewd Militarism : Army Loli embodies leadership, honor and licentiousness. If this sounds like you, there is only one way to become an Officer in the Army. Gambare, Gamabre, Senpai!

Ahegao Defense Force : Climax on battleground is the main rank insignia. To access the Army it is necessary to be Bakunyū.

#FF91AF totalitarianism : Baker-Miller Pink tyranny prohibits all opposition colors and exercises an extremely high degree of control and regulation over shades of pink. No other colors are admitted under this government in order to regulate citizens' wholesomeness.