Archive at the End of History 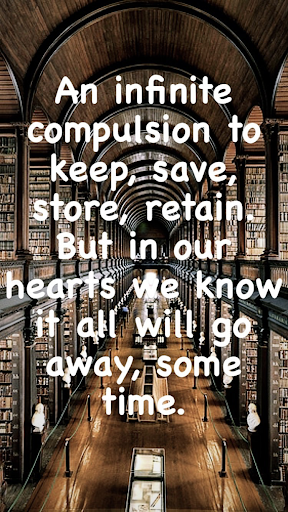 I work in an archive. I have a student job at my university’s cataloging department handling manuscripts, organizing them into non-descript grey boxes and describing the files on a database. The dead speak to me, in a way. In the archives, claims Jaques Derrida,

“A phantom speaks -- What does this mean? In the first place or in a preliminary way, this means that without responding it disposes of a response, a bit like the answering machine whose voice outlives its moment of recording: you call, the other person is dead, now, whether you know it or not, and the voice responds to you, in a very precise fashion, sometimes cheerfully, it instructs you, it can even give you instructions, make declarations to you, address you requests, prayers, promises, injunctions.” Hamlet’s father’s ghost speaks to him from beyond the veil and drives him mad towards revenge. The dead speak to me and worm themselves into my mind, and are legitimized by being archived. I take them dead serious. I take this paper and put it into pH safe folders, intending it to be there forever.

I had to archive a horribly racist manuscript once. This document was a cognitohazard, something that did harm by the action of perceiving it, a memetic trace, jumping from the paper into my mind, a unit of culture worming in from a dead racist into me. Another cataloging project had me organizing a dead racist’s books.So here I come in, a third party of a third party, dealing with a collection of a dead man’s books about the horrors of “Islamic Facism” alongside books about combating heart disease, assisted suicide, and a binder full of print outs of him talking to himself on a forum in 2005 called Weapons of Mass Destruction about how the liberal media was silencing him. It was mostly sad to look at.

What gets sent to the archive? The curator decides what accessions we keep. I had to rehouse hundreds of sheets of film from a rich family spanning a century. They had young sons in the 1970s. I realized they were too rich to fight in Vietnam. There were pictures of them driving sports cars instead.

No archive without outside, says Derrida.

I take the neologisms “cognitohazard” and “memetic” from the lore of the SCP (Secure, Contain, Protect) Foundation, a collaborative horror writing project that takes the framing device of a bureaucratic archival entity put into place to contain “individuals, entities, locations, and objects that violate natural law.” SCP entries are recognized by their detached, pseudo-academic writing style often compared to H. P. Lovecraft. The researchers cannot do anything in the face of these entities, they can only watch in abject horror and catalog what they find.

I struggle to even remember much of what I did at work at the height of the pandemic..I was simply a Sisyphean automaton. An archiving-machine. It felt bizarre to be working during a crisis in an archive.

The cognitohazards slipped in unannounced and unnoticed as I shifted through early 2000s culture war documents regarding creationism and evolution, a hotly debated topic here in Kansas. I found a document called “The Wedge Strategy,” a fundamentalist strategy to further evangelical Protestant values in policy starting with the creationism issue. I got scared. How many wedges had I been exposed to before that I never noticed? Something whitehot and polarizing to the public. The cognitohazards leak radioactive thoughts into your own.

There is a mournful, apocalyptic streak to the archive I felt intensely during 2020. Perhaps the melancholia present in archives and libraries is a lingering memory of the loss of the Library of Alexandria. You cannot save everything.

The time is out of joint—O cursèd spite/

That ever I was born to set it right!

Time flows ever onward, leaving in its wake an impossible amount of detritus and debris, memos and receipts and letters and emails -- all ephemera from ghosts sometimes not meant to be saved. Time is out of joint in the archive, an endless history sprawled out before and after you; impossible to hold like sand in a fist, yet still we try to secure, contain, and protect.