Burning Houses and How to Paint Them

My pharmacist told me today that my Adderall won’t be filled for a week even though it’s due today; I’m all out. He says it’s been really popular and that the supply chain issues are making things even worse. Sick. Maybe I can borrow Emily’s Adderall, or I could buy back my Modafinil from Nathan. Even sicker.

I’m home now watching Josh talk about neoliberalism and housing while I try to make a deepfake of Rachel Maddow’s face combined with a video of Tucker Carlson moaning about Kyle Rittenhouse. It doesn’t work; the module keeps exporting the same video of Tucker with no edits made, and I don’t know if it’s working until the rendering is done. I scrap the project and start colorizing infrared drone strike videos using some Colab AI project I found on Twitter. Many drone strikes occur without an operator ever knowing who the target is—an AI program has deemed that person’s location, via SIM card tracking, to exhibit similar behaviors to “enemy combatants”. Then AI paints pretty colors onto the execution videos. Now a group of AI Kargu Attack Drones are getting cancelled by the UN after they alleged that a number of said drones hunted down and killed Libyan soldiers without ever having input or consent from human operators. I will stay awake at night thinking about this toxic culture of insubordination.

I don’t know what I will do with the videos, right now I just watch them.

I fell asleep and now I’m at work. It’s Tuesday and that means I have therapy for lunch. It’s so cold out that I have to take my Zoom therapy session inside a restaurant while The Weeknd plays very loudly over the speakers. The session goes fine, we speak about my primal fear of “time running out” and lost futures and my dad. Tuesdays are mostly prep for Thursdays, which are EMDR sessions. Get the lay of the land, gather intel, and ready my defenses for 7 A.M. on Thursdays when I move my eyes back and forth and tell her what comes to mind. I’ve given up feeling angry at how effective it is, how much softer the world becomes with those simple eye movements, so rudimentary and surgical compared to other types of therapy. I like it because I don’t have to want to get better for it to work. I just have to show up. My insurance ends in two months.

A year ago today (it doesn’t matter what day it is) I was moving out of my old apartment. I was  throwing up a lot too, unrelated to the move. I was paying out of pocket for Scopolamine, an  anti-nausea patch that goes behind your ear. It worked, but the side effects I experienced are  comical: slurring of words, inability to form sentences, brain fog, and dilated eyes. I’d hold my  phone out arms length to read texts. Scopolamine is made from Scopolia Carniolica, a poisonous  relative of nightshades. In looking up the reference information for that last sentence, I read that  it was used by criminals in Europe to stupefy or kill their victims. Sometimes it was used in love potions too, though this also killed people. Lol.

Two years ago today, I met my favorite author. I gave him a book that I made called Ghost Bird. It’s about this dilapidated building out on the forested cliffs of Bolinas, California. I found it on a hike. I climbed through a bottom floor window to find telegram equipment, swarms of flying Barn Swallows, and the dead swallows that lie on the wooden floor below them. Everything had a layer of dust on it except for the sills of broken windows through which the swallows would fly in and out. The building had a second story that was mostly a walkway around the inner perimeter where one could peer down into the main floor, leaving the rest of the building to have 30ft high ceilings. The staircase to the second floor had collapsed into what seemed to be a deep pool of black water. The rest of the building, which lay past the collapsed staircase, had only boarded-up windows; the lack of light would make it difficult to move forward.

But I didn’t tell him, the author, any of that, and neither did the book. The book was just a collection of pictures of the swallows in the building, flying around in and out of broken windows. From outside the building, on clear days, you can see the Air Force Base on Mt. Tam, formerly operated by the 666th Radar Squadron during the Cold War. Now it’s just a surveillance satellite, that large white windowless radome on the top of the mountain. You can also, from outside that building in Bolinas, see the VA Hospital in San Francisco. And right next to that building in Bolinas is a Coast Guard Base, fenced off thrice to protect all their satellite equipment from suicidal queers, I guess. They all have similar equipment, the building and base in Bolinas, the VA Hospital, and the AFB on Mt. Tam. On really clear days, when the air is sharp, you can see all of them from each other.

Bolinas is the southernmost tip of Point Reyes, a national seashore north of San Francisco. It is a geological island; it sits on the other side of the fault, inching its way up the coast every year. In 1906, the entirety of Point Reyes, 180 mi2 or 287.44 km2, moved 21 feet north. Every time I go there, it’s different: something has eroded or caught ablaze or been grazed, vandalized or blocked off by the Parks Department (redundant). Precarity in an overwhelmingly visual and intense form. I used to love it there because it felt like I could die and it wouldn’t be my fault. I’m healthier now (medication shortage pending) (also what the fuck does healthier even mean? I was having normal reactions to awful shit) and don’t hold that love so close to my heart anymore. I still like it though, that island with a fake border (also redundant). It’s pretty, and that’s usually enough for me.

I am not unique in my exhaustion from trying to understand surveillance, mental health, climate change, labor history, Luddism, extremism, and whatever prefixed-hyphenated version of capitalism Chomsky says we are in. The more I become an expert, the less I have any fucking clue what’s going on. What does it mean that psychiatric medications are oil byproducts; that my blood has iron in it, but so does rebar; that we no longer understand how artificial intelligence works; that we are ghosts of trauma; that I might be clocked in when the world ends; that some rocks are so old that they move people to tears; that loneliness breeds capitalism; that the hardest part of overcoming a childhood is grief; that it does and doesn’t matter that something, whatever it was, was an accident; that the information I give websites is the least valuable piece of the puzzle; that overpopulation isn’t actually an issue but unequal consumption is; that I am supposed to feel bad like this and that bad feeling is, if anything, the healthiest part of me.

I don’t know the answer to these questions. I know their shape but am in-between commercials during a “Who’s That Pokémon?” segment.

In the midst of a meltdown about the utility of my art, I text a close friend saying "how long can I paint the house burning down?" As in:

How long can I paint the walls of a house that is burning down?

How long can I paint a picture of a house burning down?

I had it tattooed on my leg to remind me of the severity of this issue, but also because it looked hot. Still does tbh.

How it Might Feel For Something Immense and Uncertain, 2020. 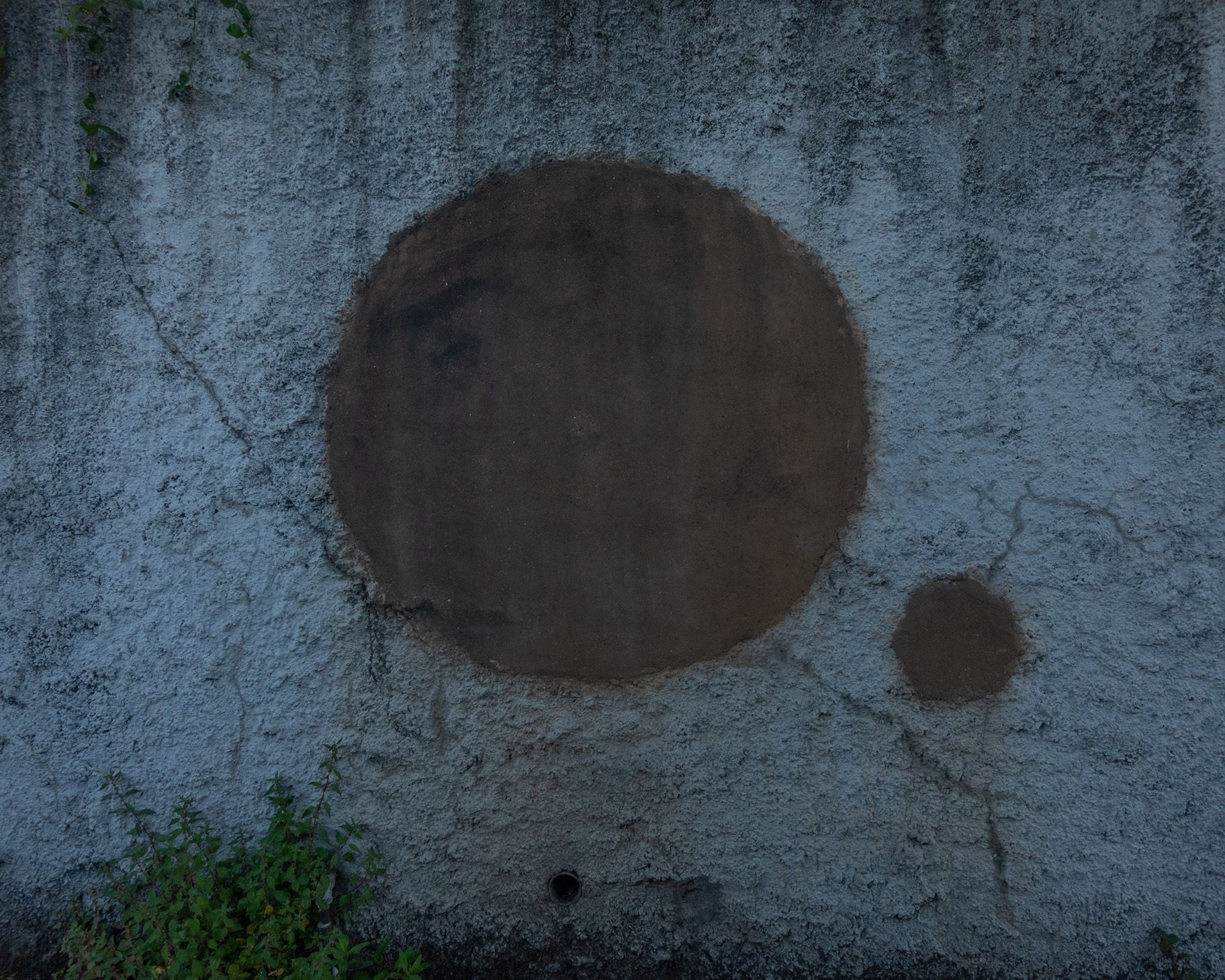 Sometimes I come across a piece of media, some book or a song, maybe a poem and, depending on the supply chain of taxed amphetamines, even a movie that makes me feel so quickly, so intensely that I’m afraid and shocked. Afraid of the vulnerability, of being caught off guard, and shocked at the thought that someone else felt something so strongly, a complicated indescribable emotion, that they made something about it.