My awareness of Christine Weston Chandler (CWC) began with her incest allegations, which I encountered through a Do Not Research discord post phrased something along the lines of “just found out Chris Chan had sex with their mom.” Half ironically, I began watching the 50+ part Chris Chan: A Comprehensive History on YouTube, which inevitably converted me into a low-ranking christorian.

One of the more tumultuous and lengthy chapters in the CWC saga is an ongoing “Fuck Quest.” In April of 2012, after years of seeking a boyfriend-free girl to make his sweetheart, Chris ultimately settled upon contacting a sex worker he found on Backpage.com. Initially Chris’s third choice, Mia Hamm was described as a “black-haired, blue-eyed woman of 24,” with a Backpage bio advertising “ pec@ils all day & night.” At a Days Inn in Rutgersville, Virginia, Chris was finally relieved from his status as a virgin with rage. Upon the act’s conclusion, Chris presented Mia with a gift basket containing “three apples, lavender air-freshener, breath mints, a Hello Kitty Pez Dispenser, and a 4-gig flash drive with the track sets of the 1990 WTJU jazz marathon, Teenage Dream, and Stronger (What Doesn't Kill You) album tracks.”

With no visual documentation, the gift basket exists as a hyperobject; a trophy of Chris’s achievement only logged in a CWCkipedia page. The existence of the basket could be a total fabrication, but its specificity leads me to believe it’s more than a myth. On the CWCKi it exists only as two lines embedded within a sea of paragraphs offering additional details about Chris’s encounter with Mia. The server itself is also subject to precarity; in August of 2021, when it was compromised by an overwhelmingly high influx of traffic, suspicions arose that it could face permanent erasure. Chris’s gift can easily be overlooked on the CWCki page, and likewise the digital ledger of sonichu.com could vanish without notice, especially given the proceedings of CWC’s trial. As a means of archiving this minute detail in Chris’s life, I tried to replicate the gift basket’s contents as best as I could, selecting what I thought was the most historically accurate Hello Kitty Pez dispenser and loading an archaically small flash drive with the tracks Chris listed. Regardless, lapses in my interpretation remain—which brand of breath mints did he include, what kind of lavender air freshener? 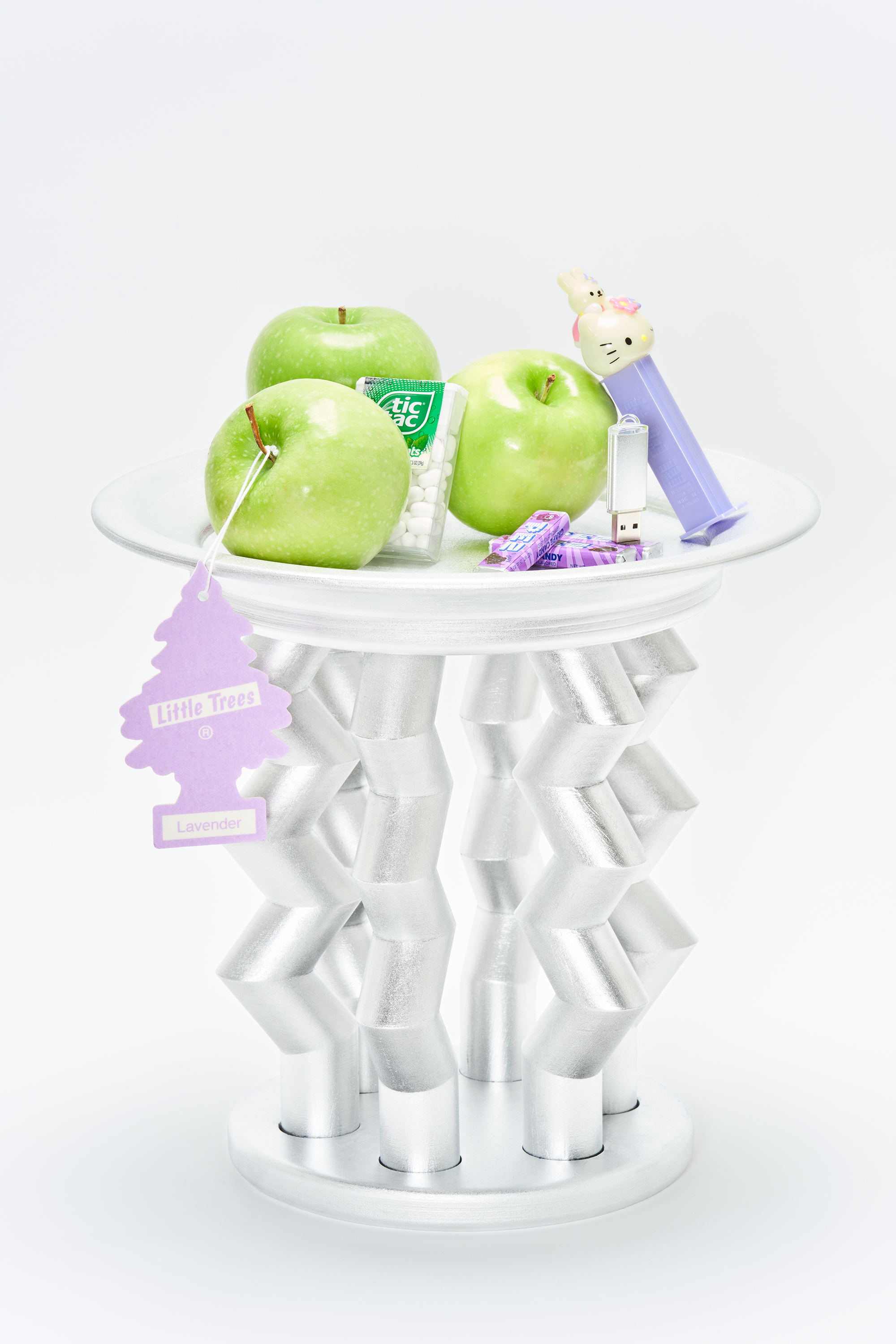 I then placed Chris’s gift upon a 3d printed reproduction of Ettore Sottsass’s Murmansk fruit bowl. Sottsass is frequently referred to as the father of Memphis Milano, a postmodern design movement characterized by its use of referential materials, irony, and kitsch. Active throughout a brief surge in the 1980s, Memphis used intentionally gauche design choices to rebel against the stoicism of modernism. The Murmansk, first manufactured in 1982 (the same year as Chris’s birth), is reflective and silver plated, with legs that appear to shift in number when viewed from different angles. Its mirrored surface and dimensions are difficult to replicate, both in structure and materiality. The 3d model used to print the Murmansk bootleg was based on a handful of photographs sourced from Google images. I have never seen an authentic Murmansk in person and I never expect to—with its rarity and $6,200 price tag it exists purely as a virtual object to me. Like Chris’s gift to Mia Hamm, I have tried to materialize it into a physical form, but gaps in the translation from virtual to devirtual have distorted its original manifestation.

(Note: While Christine currently uses she/her pronouns, she continues to use he/him pronouns and “Chris” when referring to events prior to her transition in 2015. I have chosen to apply the same conventions throughout this text.)