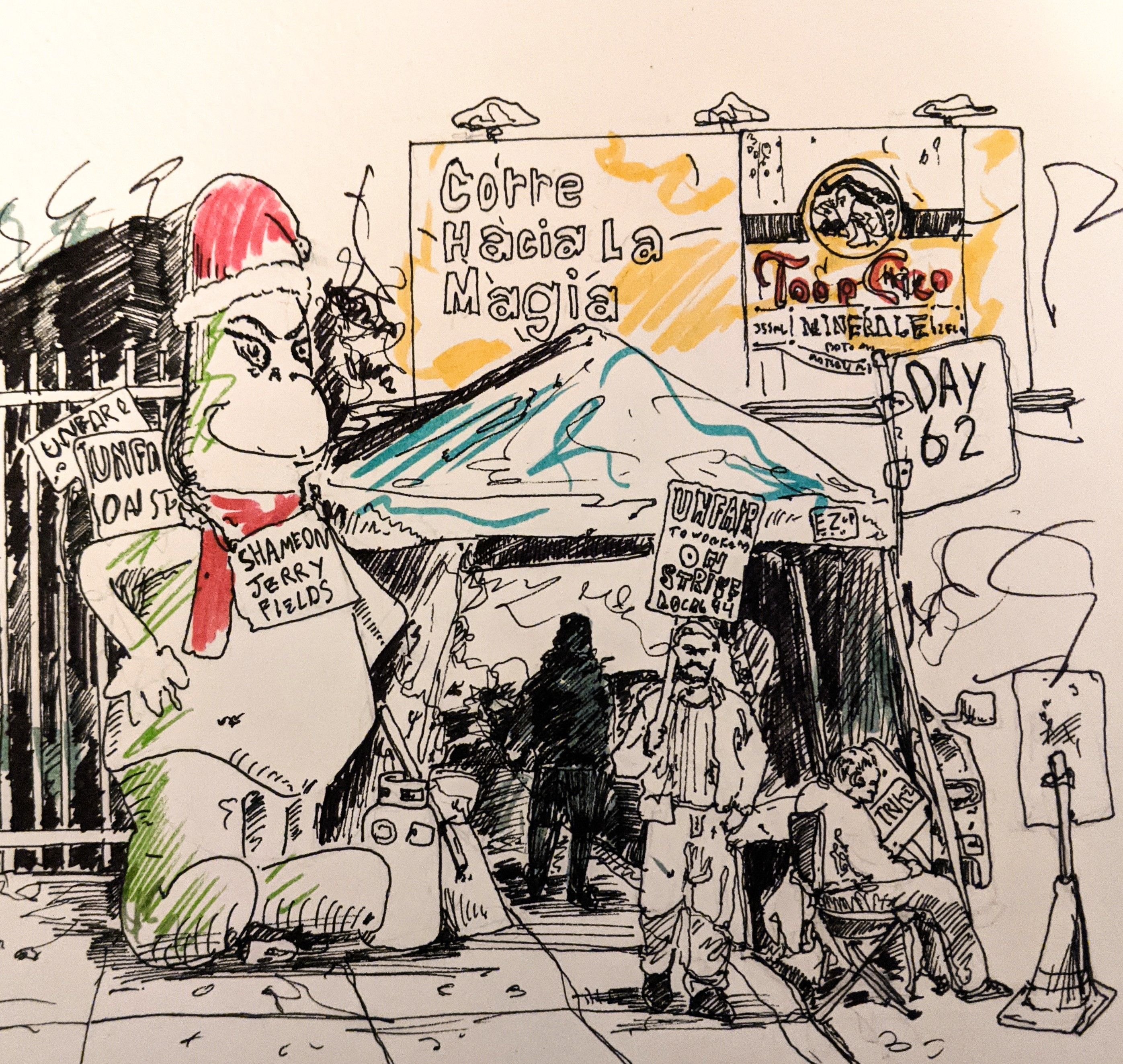 The elevators don’t work at the hospital because the engineers are on strike. I’m here to visit a friend who was struck by a sprinter van. Yesterday, a teenager in a 𝓗𝓮𝓵𝓵𝓸 𝓚𝓲𝓽𝓽𝔂™ surgical mask and paper smock lanced me with a nasal swab. 12 hours later, I got a text that says the swab had no viral DNA. Now, I’m showing this text at the guard station at the hospital. They attach an electric-green bracelet to my wirst that says NEG. They show me to the stairs. I pretend this is fine.

I’m breathing heavily in my N95-rated mask because I walked up 18 flights of stairs to get to the room of the friend I am visiting. The engineers have been on strike for 62 days. I can see them from the window in the waiting area. They have an 𝙀𝙕-𝙐𝙥™ canopy shading a ＫＥＵＲＩＧ™ coffee system, extra picketing signs, and a man cooking bacon on a G̳e̳o̳r̳g̳e̳ ̳F̳o̳r̳e̳m̳a̳n̳ ̳G̳r̳i̳l̳l̳™ (The Lean Mean Fat-Reducing Grilling Machine™).

On the ꜱᴀᴍꜱᴜɴɢ™ x90ᴊ television in the waiting area, there are hundreds of people lining a street in Dallas. 50 years ago, President John F. Kennedy’s body fell across his wife's lap after he was shot once in the upper back and once in the head. Today, hundreds of people are prayerfully hoping that he will make a supernatural return. They are hoping that the last 50 years have been a fever dream, or a divine test of will, or just a bad joke. They hope that magick exists, and that it’s 𝙰𝙼𝙴𝚁𝙸𝙲𝙰𝙽 𝙼𝙰𝙳𝙴. On the television, a pundit with shining silver hair says these people are "hopelessly detaching from reality.” I feel like everything is detaching everything. I’ve almost caught my breath.

This morning, at 𝕎𝕙𝕠𝕝𝕖𝔽𝕠𝕠𝕕𝕤 𝕄𝕒𝕣𝕜𝕖𝕥™, I saw a sign taped in front of the bottles of 𝕿𝖔𝖕𝖔 𝕮𝖍𝖎𝖈𝖔™ seltzer. It said:

LIMIT - 2 Per Customer - (Due to Global Supply Chain Crisis)

Something is happening here. I’m afraid that my friend in this hospital is too weak to make it down the all the stairs. I‘m afraid they will die here. The sign in the stairwell says:

But I want to run, and I don’t know where.

The elevators don’t work at the hospitals.

The old world is burning behind you. The air is fetid & foul. There is no magick left there now. The new world is coalescing in front of you with every step, so step well. Smell the air. Is it sweet. Run toward it then, towards a place that still has magick.

I’m at the hospital to visit a friend, who can’t heal here. We are leaving. They can’t make it down the stairs, so a custodian helps me carry them. 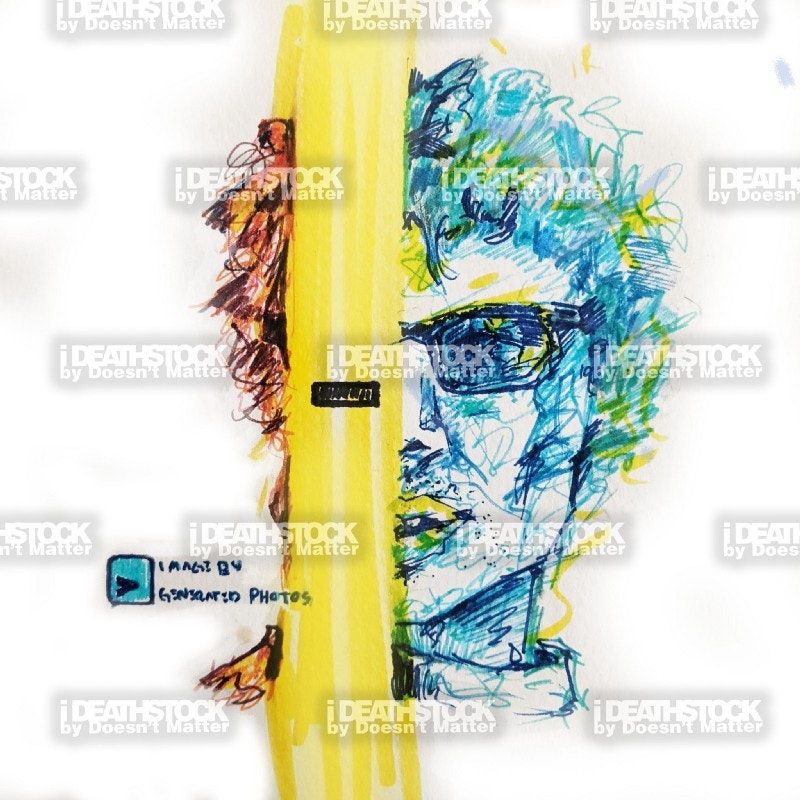 The hyphen: my cure-all. My over-the-counter remedy for any contradiction. All the world’s opposites are in an open-relationship. The cars are zero-emission. Fast-Fashion is Fair-Trade and digital shopping is sanctioned self-care. Delivery is always 2-days. The donuts are gluten-free, dairy-free, sugar-free, and guilt-free. My guilt has always been free, but I’m happy to be free of it. It’s been banished with carbon-offsets, non-GMO certification, market-based philanthropy, and my gratitude journal.

The hyphen caressed the delayed-onset soreness between misfortune and contentment. It alchemized my gestures into actions and my actions into catharsis. Fade to last week. Woosh. I’m driving through black smoke clouds, buzzed and fuzzed off of 3 THC-infused seltzers and I feel calm. This smoke was not my disaster. It’s a roadside tent-city cook-fire gone awry, over-fueled by polyester, polystyrene, and drought-dried brush. Blazing black, as the houseless lose their homes, or the homeless lose their houses, or unhoused become more unhoused. I want to use the socially-sanctioned variant of compassionate taxonomy. 10 minutes later I’m home and I’m high and I’m tapping GIVE on the $5 tier button. I’m crowd-funding solutions. A high-tech attempt to 3D-print one-room plastic dwelling coated in fire-retardant.

Gee-whiz, I could use a vacation, but I can only afford a stay-cation. I might be able to swing a working-vacay. My project manager is open to remote-work (provided I ping him 2x daily). He is a self-described conscious-capitalist and is open to alternative management styles. He gave me some stress relief tips (cryo-therapy, qi-gong, and micro-dosing). When I asked which was cheapest, he said I should dollar-cost average several crypto-currencies and I wouldn’t have to worry about it. In 3-to-6 years, I’d be rich. He mentioned boot-straps, libertarianism, and recommended a book by the Buddhist monk, Thich Nhất Hạnh. I supported local-business with the last of my stimulus-check to buy a copy of A Love Letter to the Earth. I need more loving-kindness. I need more non-duality, like the hyphen.

The hyphen keeps telling me I’m alone-together with someone I don’t see anymore. It’s saying that the anti-vaxxers caused the summer-spike. It calls hard times the new-normal. It was wildfire season and it’s announcing that my lungs are breathing mega-clouds of harmful particulates. I bought a HEPA air-filter and a 40 pack of Hello Kitty N-95s (2-day delivery). The ‘zon sent me Angry Birds by mistake. The sky is orange, the sun is an angry red dot, and I’m logging on for the company mandatory Zoom-Cocktail Hour. I’m on mute.

But the hyphen is my reality-reviser. It provides life-hacks and true game-changers. I’m working smarter-not-harder. I consume my entertainment ready-cut into micro slices at 2X audio speed. I’m ready to take it at all face-value, but my bi-weekly micro-dose might have been macro. I’m anxious, I’m vibe-checking.

Because the hyphen labeled my single mom non-working. She was working as hard as she could. It said peaceful-protest accomplished something, but I’m Reddit searching tear-gas remedies. It claimed that these were farm-fresh raisins, not dried-out grapes. It said this was non-addictive. It married all the adversaries at shot-gun weddings. Prima-nocta, clean-coal, progressive-politics, risk-reduction, climate-neutral, labor-parties, gummi-vitamins. It reconciled irreconcilables. It fried my nuance neurons with adult nursery rhymes. It tells me to stay-home, to mask-up, shop-local, and eat-clean, but remember to treat-my-self. I need some more clarity. I can’t tell the difference between a treat and a toxin, an ego-death and my death-drive. I’m tired-and-wired, suicidal-ideation, science-based, open-source, open-secret, identity-politics, liberal-democracy, post-truth, late-capitalism, cross-eyed, empty-eyed.

I’m crying again, but my tears are not hyphenated. They are not tears of self-care or cathartic-release. They are not a symptom of poor AQI. They are just tears; just tears, okay? I don’t want to be solution-minded right now. I’ll be laughing later. I want it to just be laughter, just laughter. Please don’t absorb my sadness and feed me a market-based cure. I don’t want to see an ad for ketamine therapy or a weighted blanket. I don’t care if I get a free eye mask.

I need for nothing but authenticity. I just want to howl and cry and scream and fight and joy and poem and lick and forest and run and trip and river and ride and spoon and love and make love and risk and grieve.

I don’t want hyphens; I want an infinity ♾ a lemniscate ♾