Within contemporary, net-based image culture, the screenshot functions as a kind of objet-trouvé. A captured image or text post, from an obscure corner of the internet (often anonymous message boards such as 4chan) is reposted in a new context on account of its humor or relevance. The found quality allows for a deferral of authority on the part of the reposter, who is positioned as merely presenting something created by another. The reposter does, however, on account of their decision to repost, bear some authorial responsibility.

While the recontextualized screengrab is often presented for comedic effect, increasingly it is posted as an apparent font of ages-old spiritual wisdom. In certain contexts, the found character of the screenshot (particularly screenshots of text) increases the authority of the views expressed therein. 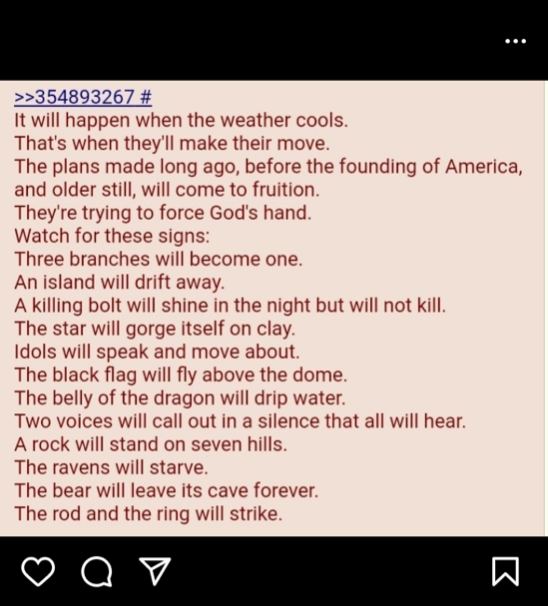 A dark prophecy foretold by a 4chan Anon, reposted to Instagram

In the sphere of web esoterica, made newly popular by a number of relatively high follower-count Instagram repost accounts, the anonymous nature of the 4chan greentext post is a contemporary embodiment of pseudepigraphic attribution. These reposters, who are themselves anonymous, re-present these greentexts as cropped screen-captures within other zones of social media, such as Instagram. In this way, the ideas contained therein are presented as having bubbled up from the unfathomable, unknowable depths of the internet, percolated from the abyss. The cropped aesthetic lends a sense of authority that is derived from ahistorical context that 4chan creates.

This aesthetic of anonymity has much to do with the specific function of 4chan itself. Each message board on the site has ten pages of anonymous posts presented in chronological order. Bumps or responses to posts create threads that give the posts life. The more responses a thread has, the closer it will be to the first page, increasing the posts visibility and potential reach. Barring continuous responses, posts eventually disappear altogether, without record, save for any screenshots taken by users active at that time. According to 4chan’s FAQ page, “Anonymous is the name assigned to a poster who does not enter text into the [Name] field. Anonymous is not a single person, but rather, represents the collective whole of 4chan. He is a god amongst men.” This sentiment, in years past exemplified by the now irrelevant hacker collective Anonymous, has more recently been demonstrated by political events,like the election of Donald Trump that the anons of 4chan claim were “predicted,” or “created” according to the consensus of the board. 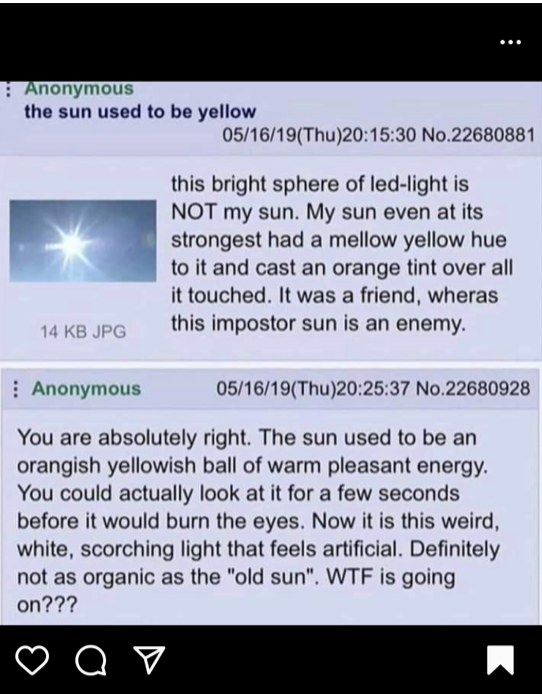 Anon makes a bold assertion about the nature of the sun

For the 19th c. Hegelian philosopher Ludwig Feuerbach, the essence of humanity, being the values of love, strength, and wisdom that it has held dear across the centuries, is identical with the essence of God. However, in religious practice, humanity is not aware that in worshiping God, it worships its own nature. In this sense, religion performs the function of opacifying this fact, of delineating our apparent separateness from the divine. On this, Feuerbach writes:

Perhaps the internet is another form of human self-consciousness, and performs a similar function of abstracting humanity from its own nature, thereby allowing for its indirect self-comprehension. The anonymity of posts allows for the obscuring of their authorship and in so doing lends them a kind of aura. The greentext prophecies reposted on Instagram resist debunking, as their source cannot be neatly identified and subsequently found to be erroneous. 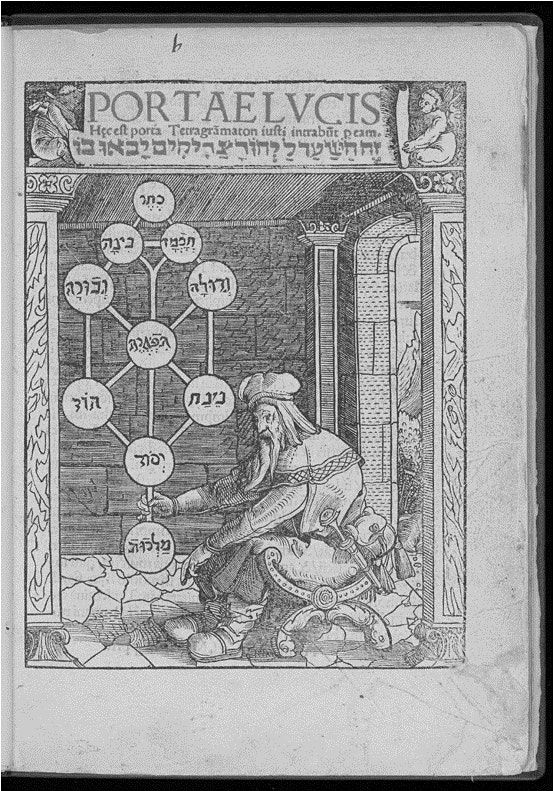 Early modern engraving of a scholar engaging in Kabbalistic practice

This strategy of false attribution is by no means novel, and has been employed for centuries as a means of lending weight and authority to religious texts across all systems of belief. In the 17th century, European Jewish kabbalists were engaging in just such a practice. The kabala, an assemblage of Jewish biblical exegesis, mystical religious practices and ideas, may here be understood primarily as a method of spiritual meditation and practice aimed at restoring a union between humanity and God. At this time, many practitioners of Kabala located the origin of their primary texts centuries if not millennia earlier in history, though they were in fact far more recent creations. Leon Modena, a Jewish religious authority from Venice, aimed at debunking these spurious claims. According to Yaacob Dweck, a professor of History and Judaic Studies at Princeton University:

Modena identified pseudepigraphy, the deliberate ascription of a text to a person other than the author, as a basic strategy employed by kabbalists in order to gain greater authority for their texts. He sought to demonstrate, however, the recent origin of these works and noted that even kabbalists themselves did not agree about the specific authors of their works. (2)

Leon Modena’s attempt to prove the falsity of these kabbalists’ pretensions was mostly unsuccessful, and the veneer of authenticity provided to these texts by their purported origin solidified over time. This was perhaps best exemplified by the case of the Zohar, perhaps the most well known text of kabbalistic literature. Likely penned in the 13th century CE, it was claimed by its probable author, Moses de León, to be much older – a product of the 1st or 2nd centuries CE, in the period directly following the destruction of the Second Temple.

Regarding the reception of this work, Dweck writes: “when a group of experts lost control over a given pseudepigraphic text, they could no longer determine how people would conceive of it or its origins. With the Zohar, the text had taken on not only the veneer of authenticity but also the status of tradition” (3).

This “status of tradition” is difficult to dispel once it has arisen. In the 17th century, this authoritative designation was helped along by the relatively recent invention of the printing press and subsequent increase in circulation of this type of literature. The rise of net-based distribution networks only accelerates the pace at which this “status of tradition” is conferred.

As is made clear by the esoteric schizoid greentext posts discussed above, the pseudepigraphic continues to proliferate, particularly in an age in which historical context lies fragmented all around us. Those who choose to make the effort are able to fashion coherent narratives from these shattered moments. The pieces may be fit together by means of a few Google queries. And yet, the flattening effect of the internet reduces the difference between past historical periods. The aesthetic tropes and material of the 1700s convey “pastness” in much the same way as do those of the 700s. This elision of historical difference adds to the air of authenticity born of the anon greentext. 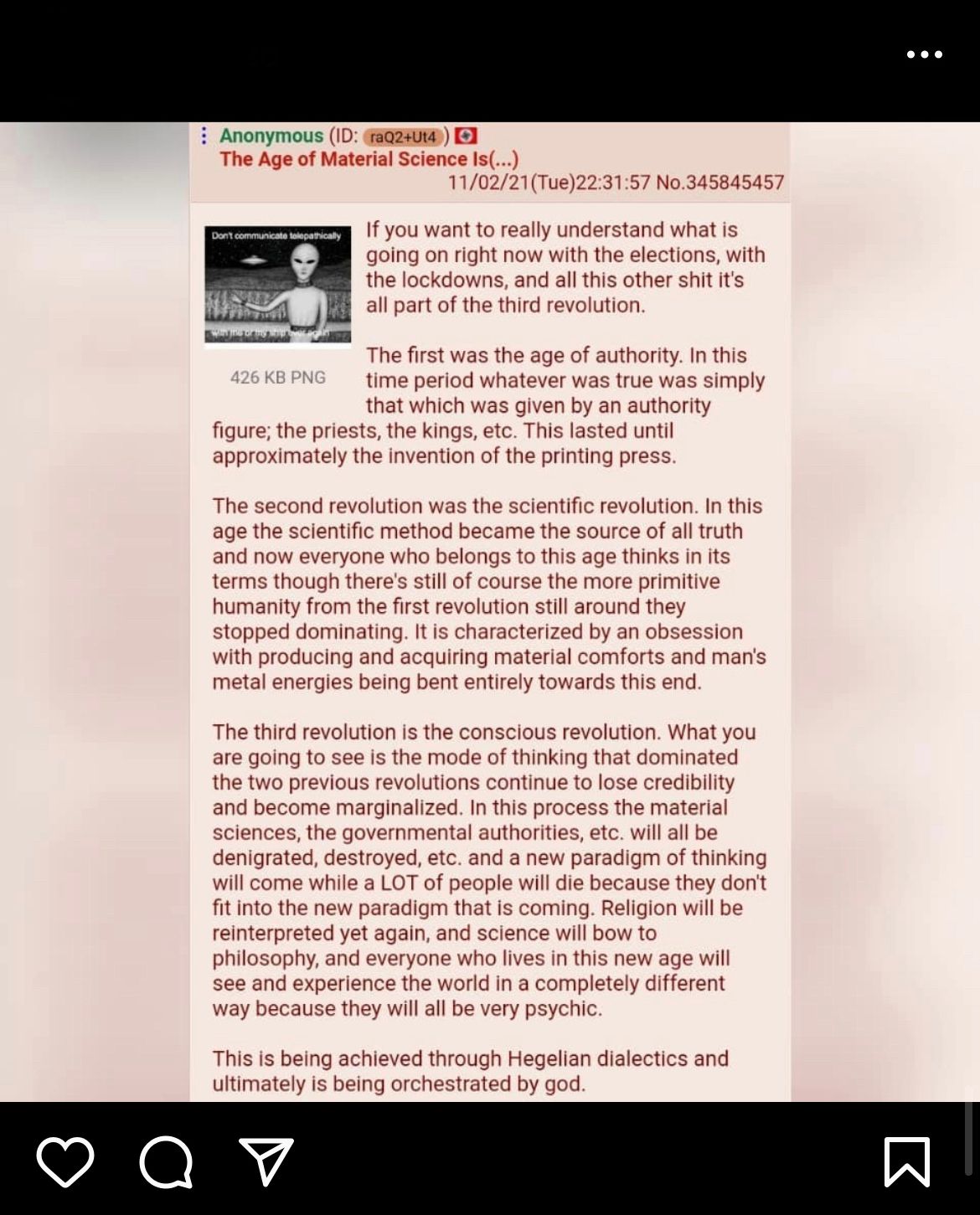 The screenshot pulled from the nether-reaches of the internet is a kind of revelation. A something out of nothing. Yet this no-thing-ness of the internet is itself composed of a finite web of users and bots, each in their way combining and recombining aphorisms, apocrypha, prophecy, maxims, tenets, and creeds lifted from various points in history, all now available to us more and more, as the alchemical manuscripts of Athanasius Kircher are now, as you are reading this very post, being digitized by the Vatican Library deep beneath the streets of Rome.

Is it all just schizzed-out social media fodder to drive engagement? Yes, probably mostly. But why does this type of screenshot-revelation have this much currency today? Is the reposter comparing the relative engagement numbers on each post to determine which faith is true? How are we to know that the reposter is not themselves the greentext OP? Having recognized the aura that the format provides, what is to stop the deployment of this strategy to lend an air of found-authenticity to any given (re)post?

It would be difficult, if not impossible, to provide definite answers to these questions. Instead, regarding all spiritual assertions with the same skepticism, whether they be 4chan posts, the Zohar, the Bible, or the Bhagavad Gita, we must judge them on their own merits, according to aesthetic criteria, that is to say, by trusting our gut.

1 -- Ludwig Feuerbach, the Essence of Christianity, 29