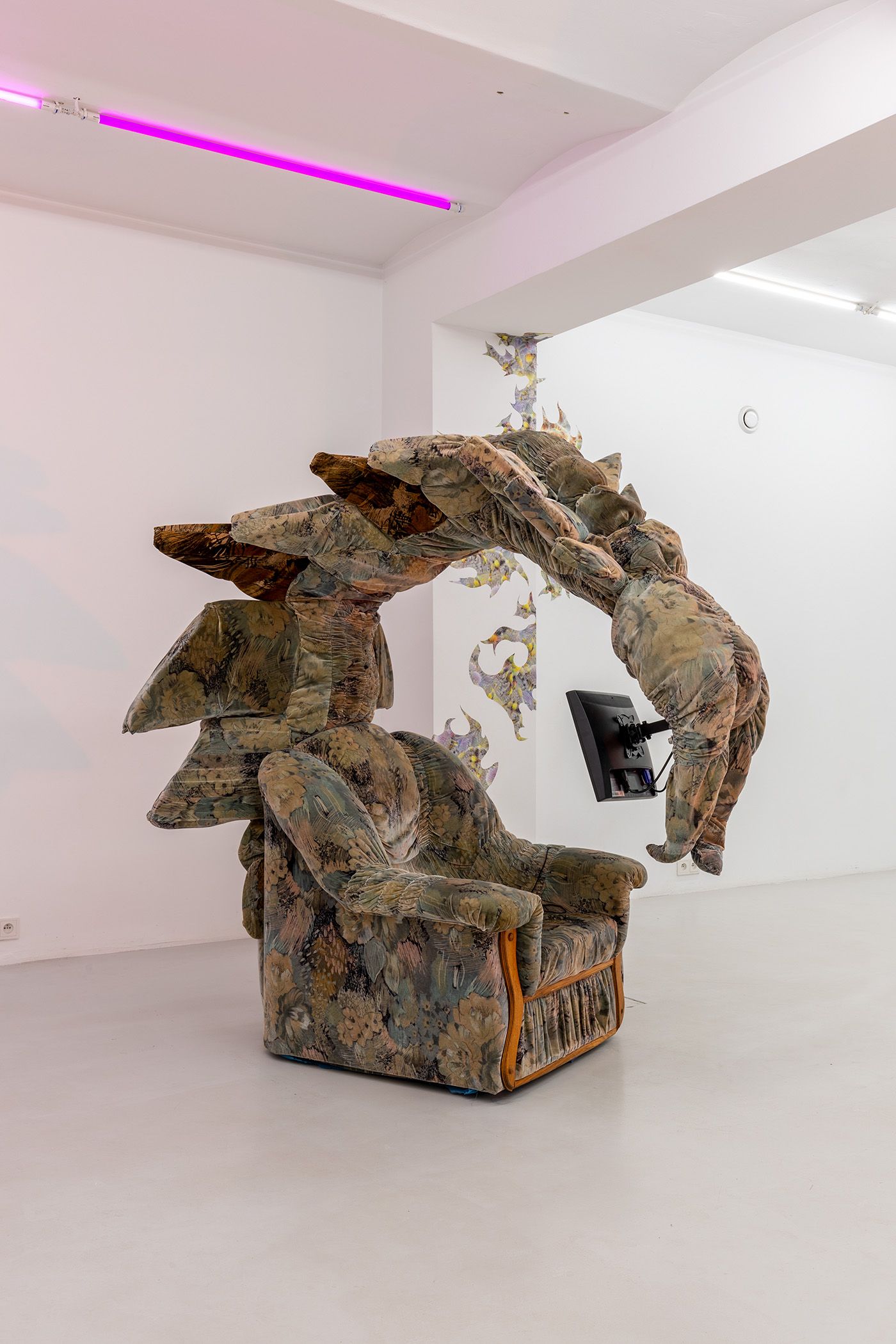 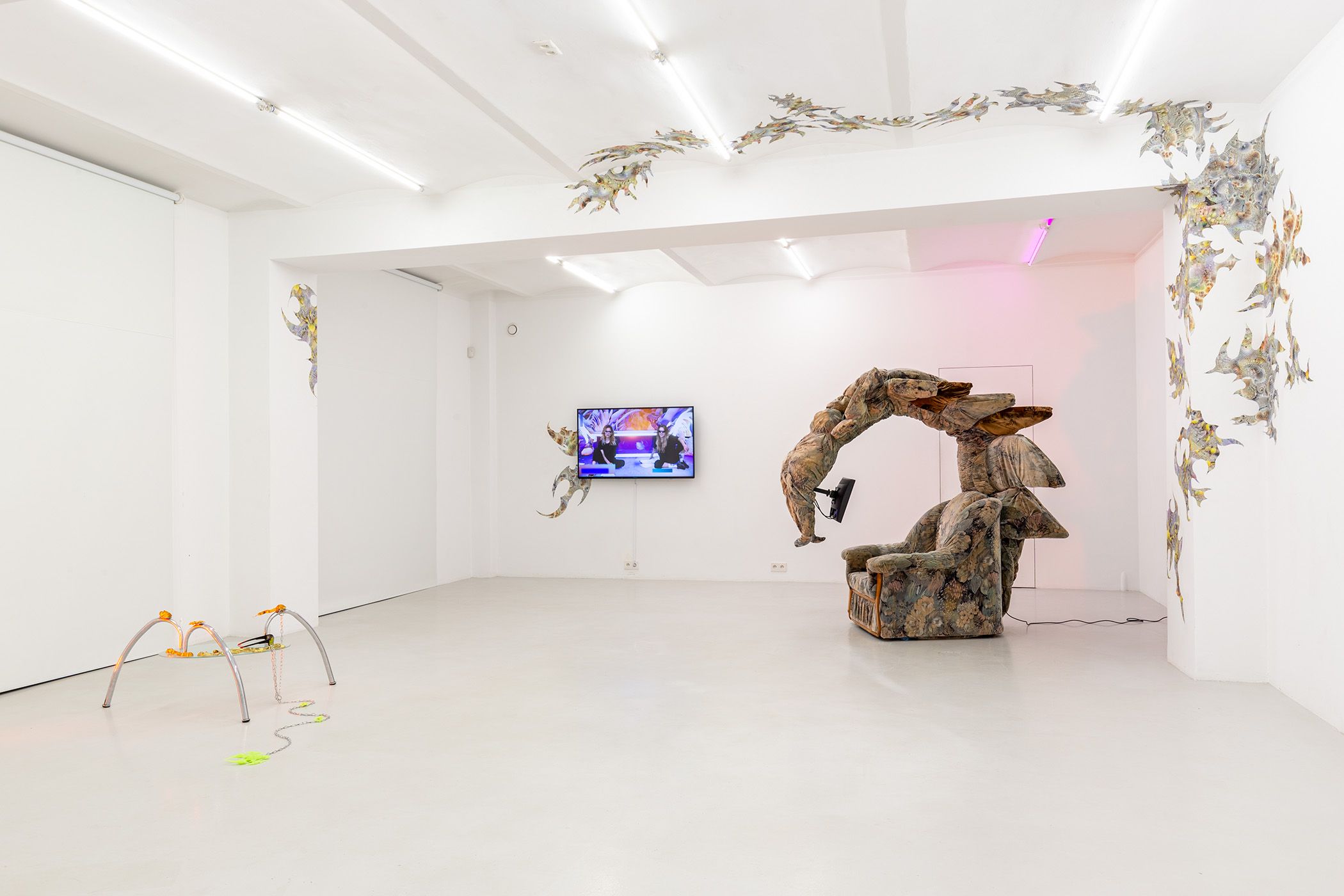 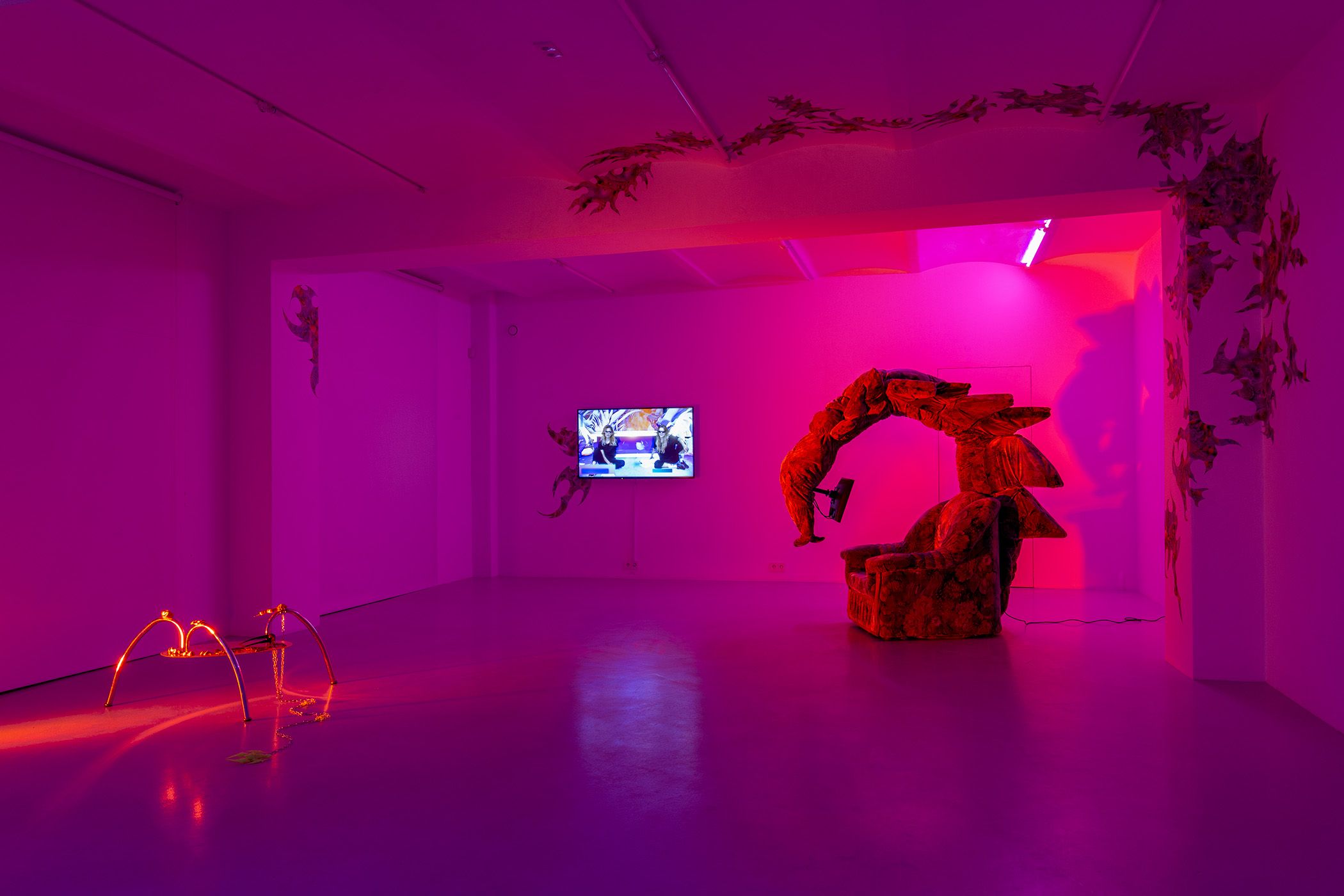 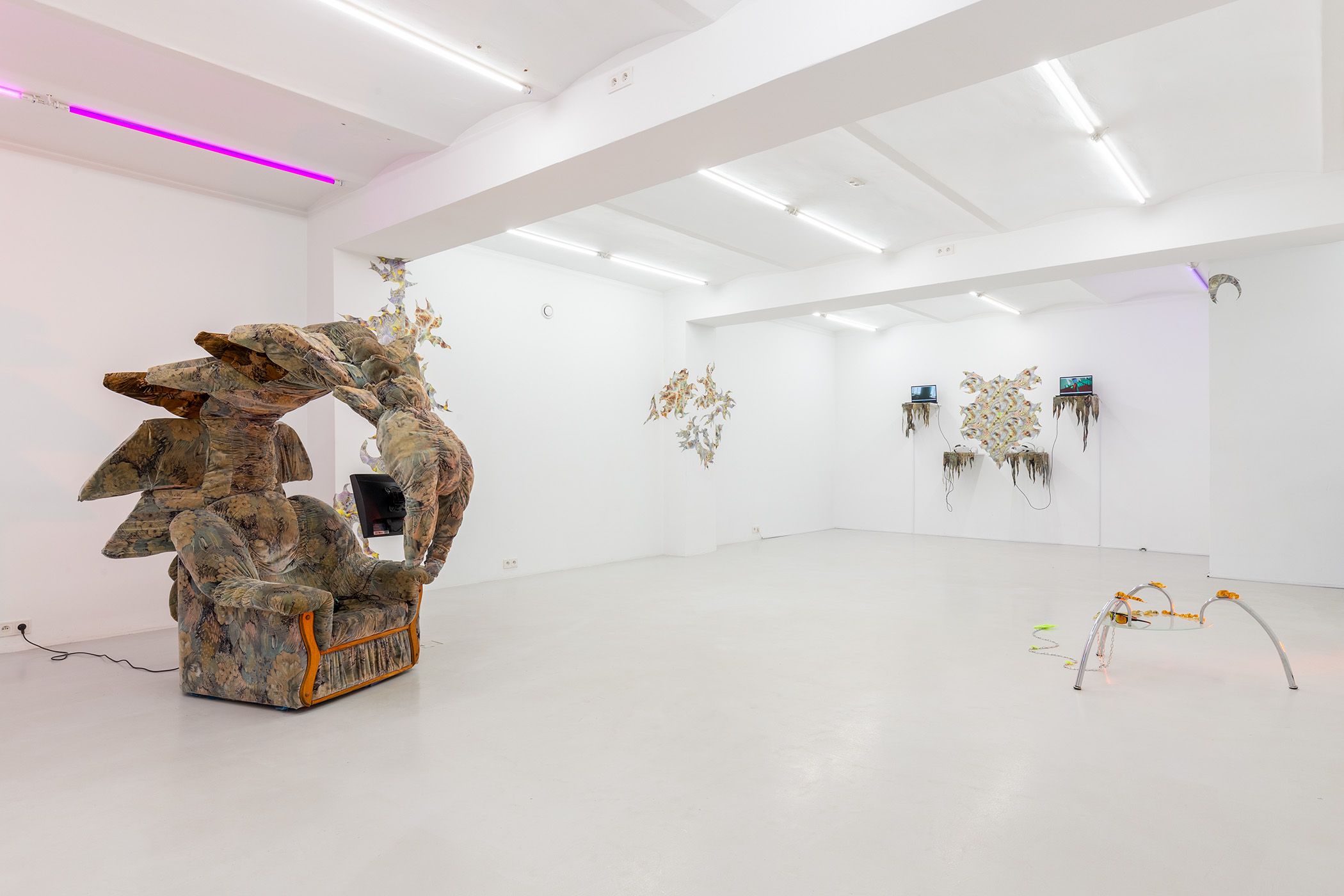 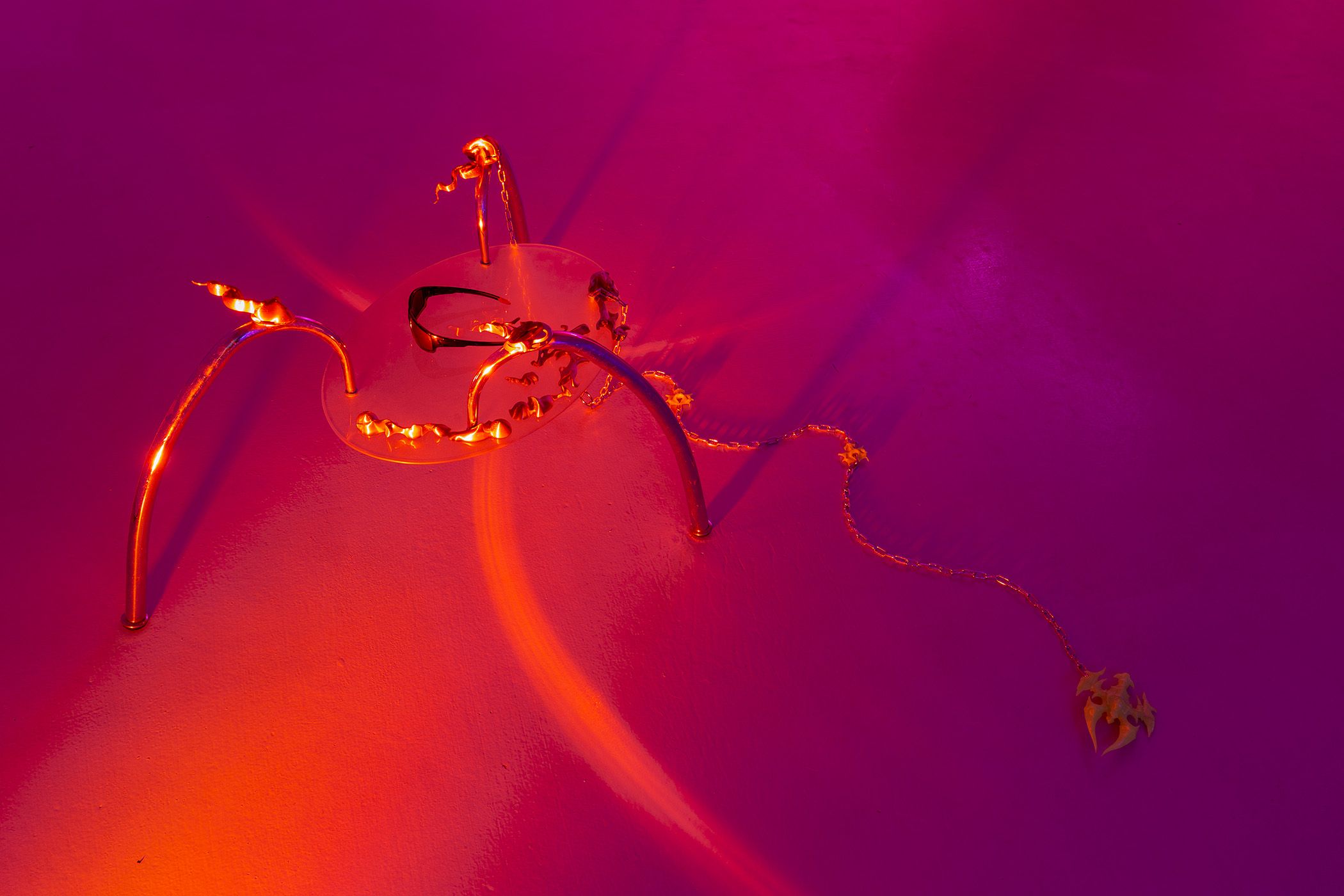 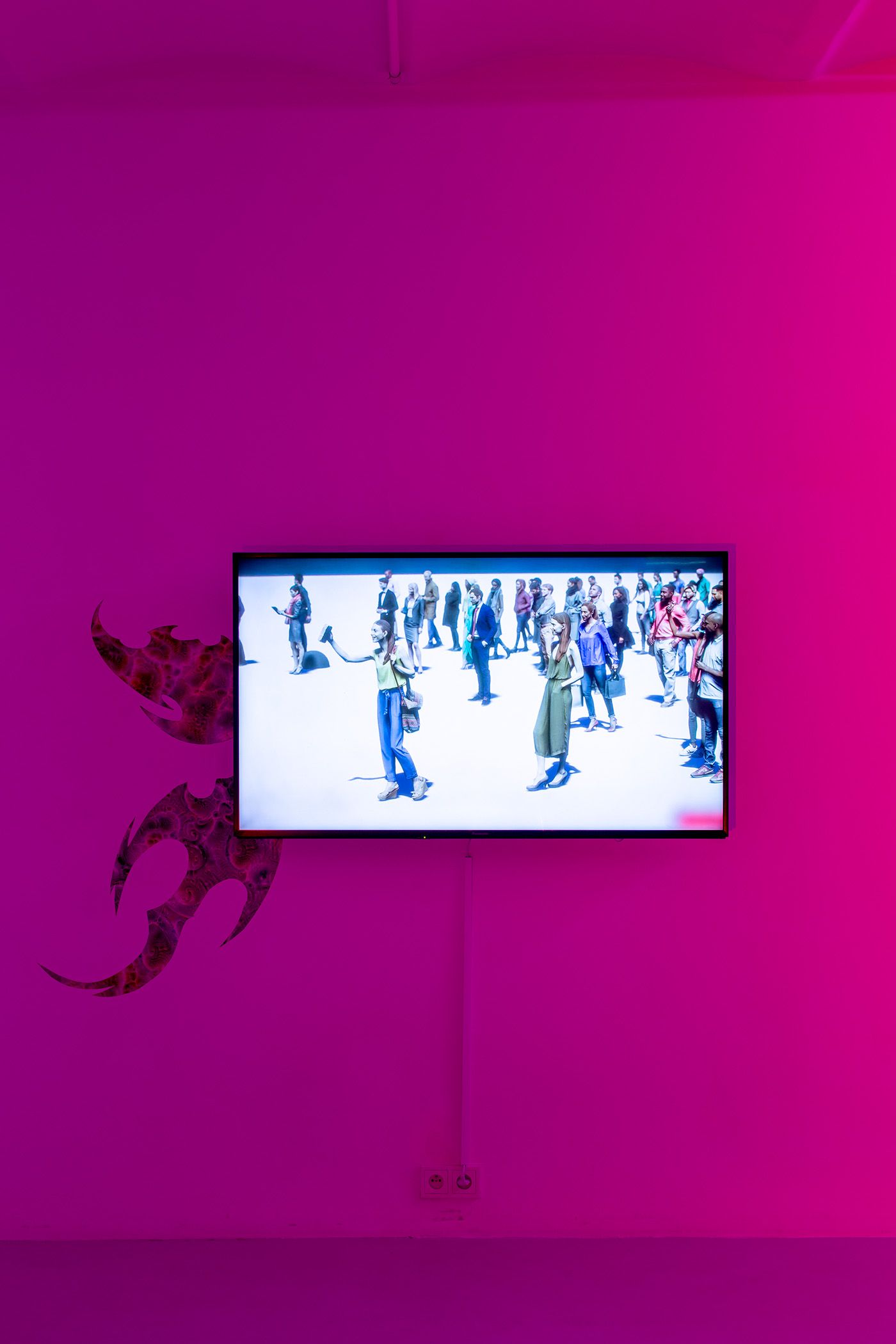 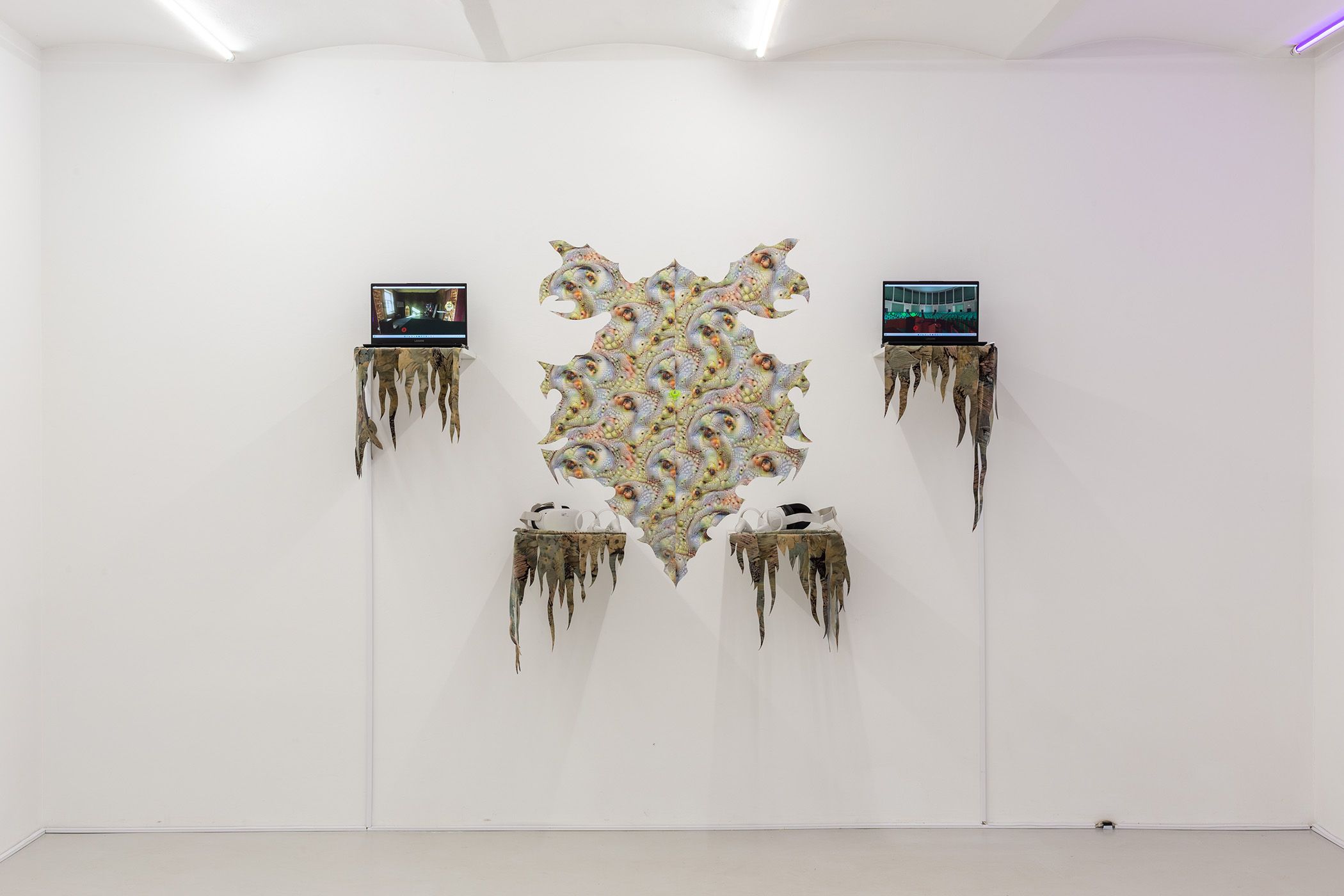 Individual exhibition of Eternal Engine is an invitation to replay the past and
generate the present. It is an experience of the beginning of the millennium, distorted and shifted: by a millimeter, by an atom, by a pixel. Mystical familiarity and psychedelic everyday. Digital folklore and queer perception.
The works presented at the exhibition have been selected from the rich artistic
output of the collective, which entails video, VR, AR, objects, installations, 3D print, performative and interventional action. In Eternal Engine: Enter the Chamber, the artists free the story of technology from capitalist and patriarchal narrations and use it to produce alternate versions of reality. They generate these realities in collaboration with a collective superhuman mind: rhizome, fluid, and deeply dreaming AI that escapes unambiguous categorization.
They state:
Instead of surveillance and control – emancipation and reanimation of exhausted
imaginations. Instead of binary oppositions – queering and overcoming cognitive
limitations. Everything presented in a DIY environment.

ENTER THE CHAMBER, enter a large room on a Sunday afternoon, rather of the dreamy and time-stretching kind. It’s 2001, it’s 2002, it’s 2003, and here we are, watching each other’s t.v. with hope and curiosity about tomorrow – and only glimpses of fear about what fate will render. We drink tea, watch Avalon, discover p2p. On the news they show a cloned sheep – today its stuffed body haunts somewhere in a sad display case. But today is not now only when the future is our favorite place on earth.

Suddenly something changes, something goes differently and not as promised. All hope seeps in somewhere leaving no small amount of distaste. What comes next is seriously different from the earlier predictions.

This raises some pretty important questions, such as:

We sit in the kitchen, eat sandwiches, AI sits on our laps, breed a new future, and play out the beginning of the millennium again, again, again, until we get it right.

ENTER THE CHAMBER: safe space for the community of the last free-living algorithms.

ENTER THE CHAMBER: here time and space can be: twisted, waved, bent and tangled. You can also: get lost and cross the sad legend that every beginning and every end are connected by wires of cause and effect.

ENTER THE CHAMBER, this is teenage gamer Anetka’s room. She is just discovering the other second gender in digital and what a problem it is -._.– ́ ̄“-. ̧ ̧.-` 𝓅 𝓉ęż𝓃𝓎 𝑒𝓇𝓇 𝓇 `-. ̧ ̧.-` ̄ ́–._.- when digital fluidity clashes with habitual patriarchal monoliths.

There are also incidents like [to name – after a conversation with J&M].

But it’s not so bad anymore: since the first punch-up, she’s managed to work through everything, read a bit and remotely absorb other people’s experiences and instructions. Legacy Rusell taught her how to arm herself with a glitch, Laboria Cuboniks taught her what emancipation is, and Donna Haraway taught her how to become a cyborg.

ENTER THE CHAMBER, here we have a cognitive apparatus disruption service.

ENTER THE CHAMBER: this is the chamber for expanding the collective imagination.

Eternal Engine: Enter the Chamber is the first solo exhibition of the Eternal Engine collective. It is an invitation to re-enact pasts and generate presents. Psychedelic everydayness and mystical familiarity. Disjunction and shift: by an atom, a millimeter, a pixel.

The works presented in the exhibition are a selection from the collective’s rich oeuvre including video, VR, AR, objects, installations, 3D printing, interventions and performative actions. The artists liberate the narrative of technology from capitalist and patriarchal narratives, and through it produce responsive metaverse – variants of disrupted realities. They create them in collaboration with the collective extra-human mind: the rhizomatic, fluid, deep-dreaming AI. They state:

Instead of surveillance and control – emancipation and resuscitation of exhausted imaginations.

In place of binary oppositions – queering and transcending perceptual limitations.

And all in a DIY environment.

The universe of Eternal Engine: Enter the Chamber intermingles and melts with millennial memories. The beginning of the third millennium is a particularly important moment: it emerges from collective memory as a time of global expansion of technoutopia and futurooptimism. For Martix Navrot and Jagoda Wójtowicz / Jagoda Wójtowicz and Martix Navrot, it is also a time of their first experiences with cyberspace, gaming culture, and its manifestations of paternalistic and violent behavior.

Experiences of misunderstanding, violence, and attempts at exclusion from gaming communities and communities focused on digital creativity become an impulse to create our own alternative environments. Empathetic and sensitive. Liminal and affirming of fluidity. Hence the presence in Eternal Engine’s work of non-sexualised bodies, biomorphic, non-human avatars and queer identities. Hence the presence of seemingly trivial, tame spaces, mysticism, magic, digital focus, irony and distance. Phenomena that do not fit into the stories told by technological empires blinded by the vision of so-called “progress” and radical commodification.