The alt-right was powerful because it could reorganise public space around itself, but the movement is gone. What’s next?

As internet movements fail and reboot, they attempt to find common ideological cores and develop the next viable aesthetic. As the alt-right crashed, its aesthetic strands split into the American First crew, ecofascists, terrorwavers, Pepe maximalists, hard masculinist aesthetics, preppers, patriot militias, and so on. They had political differences but because the internet has made all politics into what some call ‘metapolitics’, aesthetics mattered too. As a bootloader, it had perhaps become even more important for movements than the set of ideological positions.

Separate from these, and perhaps just as important, is the diffusion of some of the symbols of the alt-right into popular culture more widely: Pepe memes chief amongst them. We’re not going to delve into that more gradual process and will instead focus on the more organised aesthetic styles that have appeared, and how they have responded to the other important style on the far right: QAnon.

Starting in late 2020, an emerging aesthetic style tried to resuscitate the fading power of the alt-right’s meme magic. Where previous attempts to construct a post-alt-right aesthetic - terrorwave, fashwave - had been merely grotesque or tediously antiseptic, ‘hyperborean mashup’ keyed directly into the propulsive dynamics of our increasingly overstimulated internet culture. It attempted to escape from the poverty of fashwave images by the only path actually worth exploring: further intensification.

Let’s take these three noteworthy aesthetic styles that have come to prominence since 2016: ‘terrorwave’, ‘fashwave’, and, lately, what we are calling ‘Hyperborean mashup’, one by one.

The most violent faction of the alt-right adopted the first aesthetic - terrorwave - as an expression of maximal extremity. Red, white and black, it featured gun-toting neo-Nazis with laser eyes semi-obscured behind what they presumably believed was the most terroristic of Photoshop plugins. The message is simple: “We cannot be recuperated. We can never go back.” 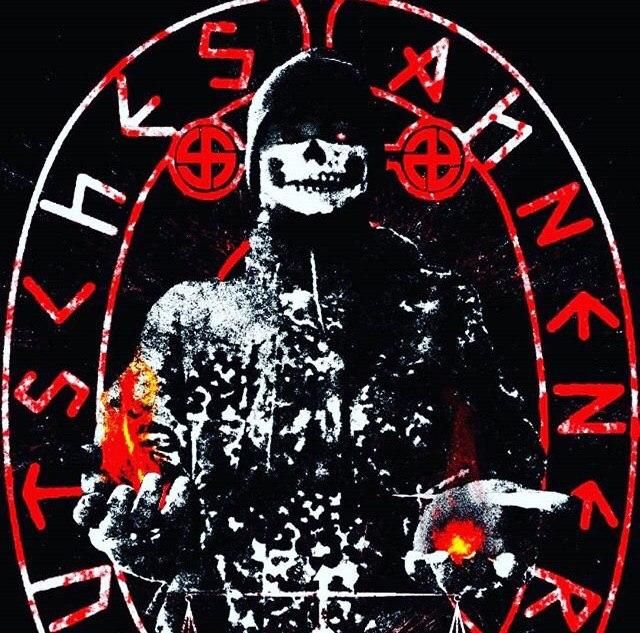 An obscured monochrome man with flames in his hands stands in front of a red arch of runes decorated with two circular swastikas.

But the style was trying so hard to be edgy that it was difficult to take its threats seriously. It attempted to induce absolute dread but mostly achieved mild peril. This aesthetic triviality does not mean its proponents weren’t serious: some of its distributors committed brutal murders. In the UK, some were jailed for their racist threats against members of the Royal Family. 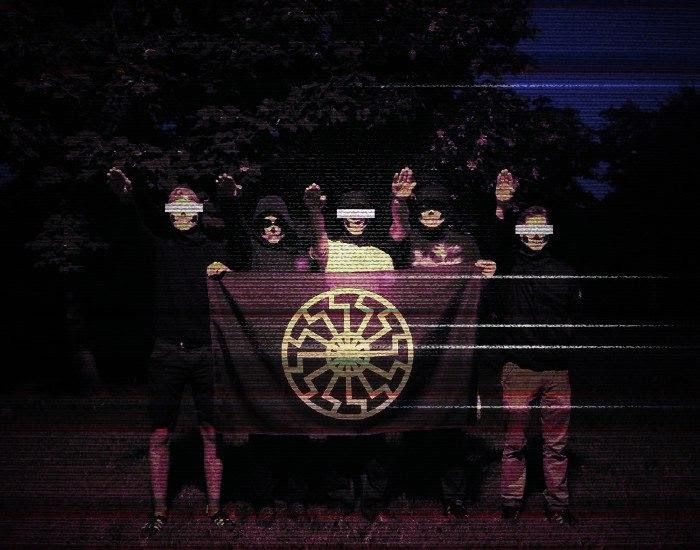 A group of 5 obscured men wearing ‘Totenkopf’ face masks give the ‘Hitler salute’ while holding a flag with the ‘Sonnenrand’ symbol. The symbol was used by the SS and then by neo-Nazi organisations particularly in countries where the swastika is banned.

Most importantly for our potted history of post-alt-right aesthetics, terrorwave failed the main test of the internet era, which is to get shared through the network by both participants and dupes alike. It wasn’t good to look at; it wasn’t fun to share. It never took over.

‘Fashwave’ adopted a slightly different tack. It harked back to the alt-right’s ascendency in 2015 and 2016, openly displaying far-right symbols in a way it evidently thought was captivating. Lone silhouetted men wander through purple retro-digital landscapes towards giant glowing swastikas. Or, 1980s-style ‘retrofuturistic’ filters are layered over pictures of Hitler in sunglasses. It drew conspicuously on vaporwave imagery to conjure the same kind of mixture of nostalgia and futurism that vaporwave had, and, arguably, like classical fascism had too. 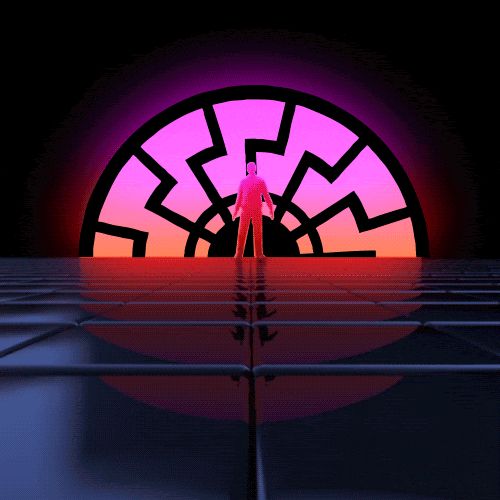 A red figure stands on a reflective floor silhouetted against a purple Sonnenrand.

Fashwave music, which often accompanied the pictures, was formed of reconstituted synthwave offcuts with suggestively racist names. Its fear of ‘African’ rhythms was so great that it declined anything as adventurous as syncopation. Even before its political content could be understood, it had become utterly banal. 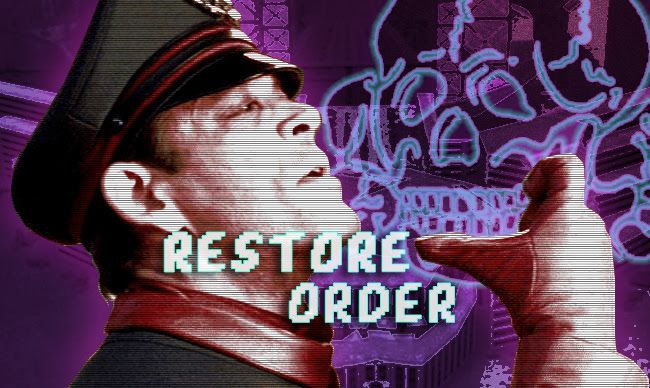 A colour shifted picture of Hermann Göring with the caption ‘Restore Order’. A Totenkopf, the symbol of the SS, is in the background.

Fashwave failed as a style for slightly different reasons to terrorwave. Its reliance on particular symbols was too great. It assumed they had power independent of their distribution by a highly active subculture like the alt-right. Like a mundane object presented after an LSD trip as a marker of its profundity (“I saw something magical in this ashtray, so let me show you the ashtray”), fashwave proponents have forgotten that the symbols they use only have power because they are supported by wider plausibly insurgent movements. You can forgive fashwave designers for thinking that this needn’t be the case: it is also the foundational illusion of much liberal antifascism that the symbols of the far right have a power all of their own.

Besides, it wasn’t the swastika that ever had power, it was the ability of the swastika to imply an enormous ‘elsewhere’ in which the mundanity of the actual far right could be forgotten and some imaginary future fascist movement’s glory could be proclaimed. Fashwave failed at constructing anything like this sense of an ‘elsewhere’. In fact, by insisting on it too much, it made clear how different the real far right was from this projected self-image. It became bathetic.

As long as the swastika’s implications were understood clearly by the vast majority of people - look at the supposedly magical symbol and see nothing but the ash of bodies - fashwave was never going anywhere.

The challenge of QAnon

Both of these aesthetics failed. But there was more to it than just their inability to propagate through the internet like the alt-right had. Over the last few years, as the severely weakened currents of the alt-right met the tsunami of QAnon, a conspiracy whose capacity for agglomeration without splitting totally outmatched the alt-right. The latter also had broad political conditions against it. Whereas the taboo on explicit racism turned out to be fairly strong in much of the US, privately believing bizarre things remained not only acceptable but became seemingly adaptive to the strange accelerating world.

QAnon was more fun, it allowed for the world to become more apparently coherent, and was more aesthetically flexible. It inspired (and still inspires) densely populated truth maps whose connections for the uninitiated (or even the initiated) are usefully baffling or vague. Better than the fixated and tiresome alt-right, it accommodates all possible modes, from deep relaxation to fervent anger within itself. 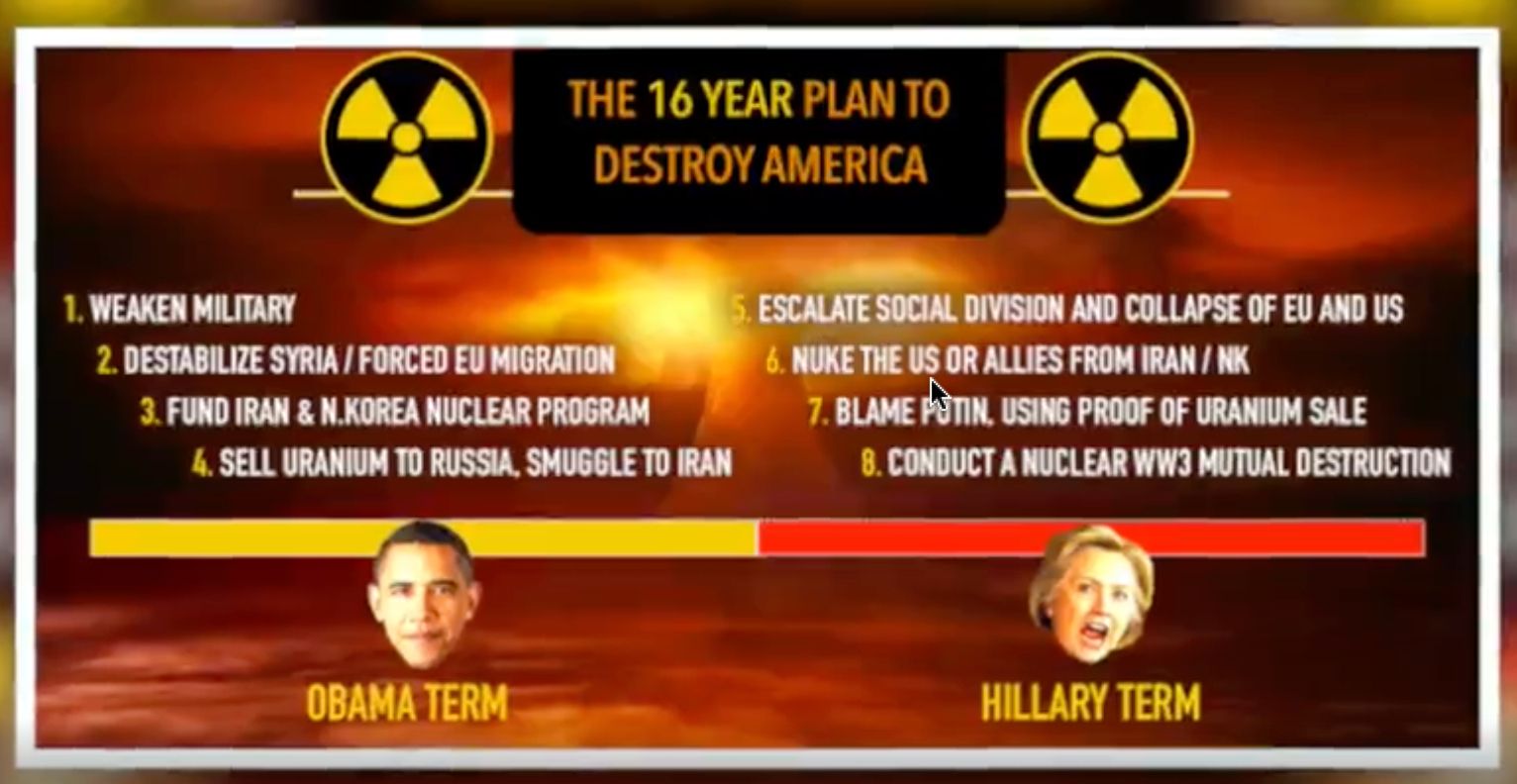 QAnon’s images are also much closer to the pre-chewed aesthetic mainstream. Delivered to a population entrained by a decade of superhero films and enlisted into the defence of the state by the aftermath of 9/11, QAnon runs smoothly on the cognitive, organisational, and technical infrastructures of political normality.  It might be strange freight, but it functions perfectly on a population subject to two decades of encroaching state authoritarianism. 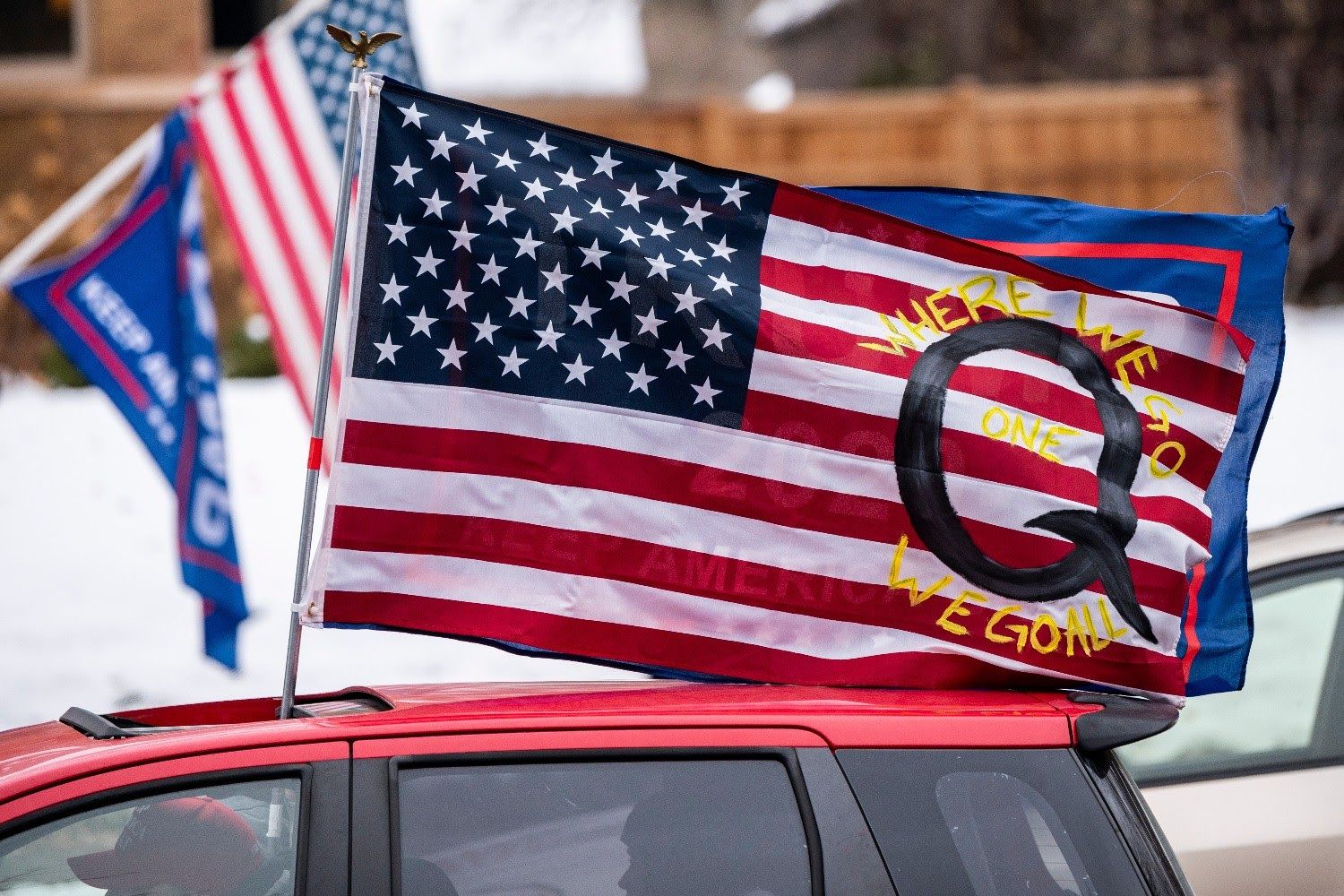 An American flag decorated with ‘When we go one we go all’ and a large ‘Q’.

Neither of the above styles of far-right image-making can compete. How might the more extreme, and explicitly racist, parts of the far right respond aesthetically to QAnon’s challenge?

Unlike fashwave, which pares everything down to the mechanical essentials, ‘Hyperborean Mashup’ relies instead on an overload of imagery and symbolism. It flits between images as fast as possible, arranging this flow of signs into narratives of ascendance and transformation, somehow both generic and esoteric at once, all strung through a series of what seem initially like throwaway jokes. One video opens with ‘Allah’ joining a Discord server - inexplicable unless the wider context of the far right’s flirtations with and memeing of Islam is grasped. 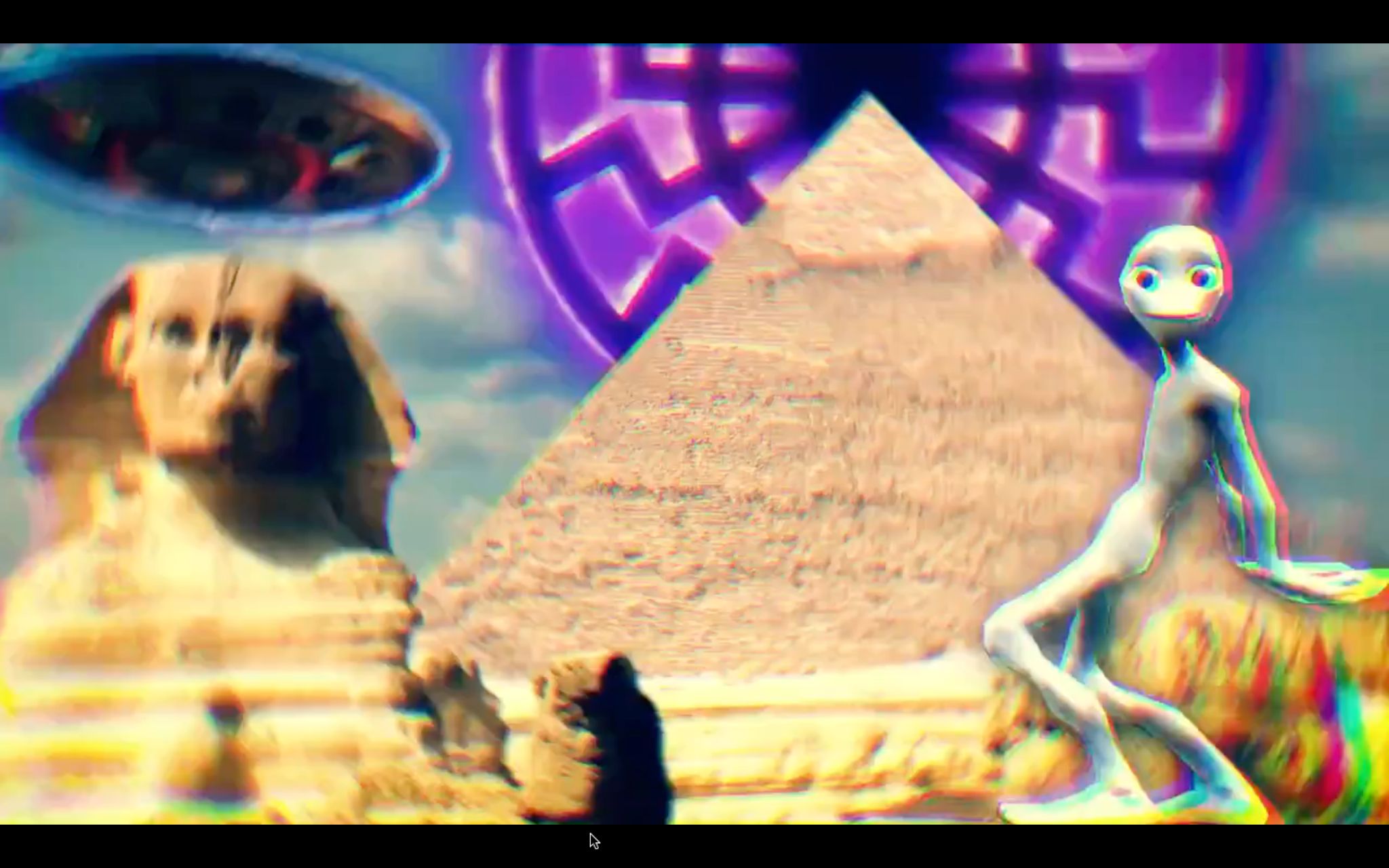 A dancing alien next to the Sphinx. At the back, a pyramid surrounded by the Nazi sonnenrand symbol and a UFO.

The videos are of almost excessively high quality. This makes them suspicious to others on the far right: must be the feds. That’s a possibility (that’s always a possibility) but the flood of free software, un- or underemployed video artists, After Effects prodigies, and acres of free time that the pandemic has gifted some means it’s far from the only explanation. Its capacity to seem at once joking, at times unnervingly committed, and ultimately to be disavowed as ‘disinformation’ when its specifics are questioned makes it the perfect conspiracy material. 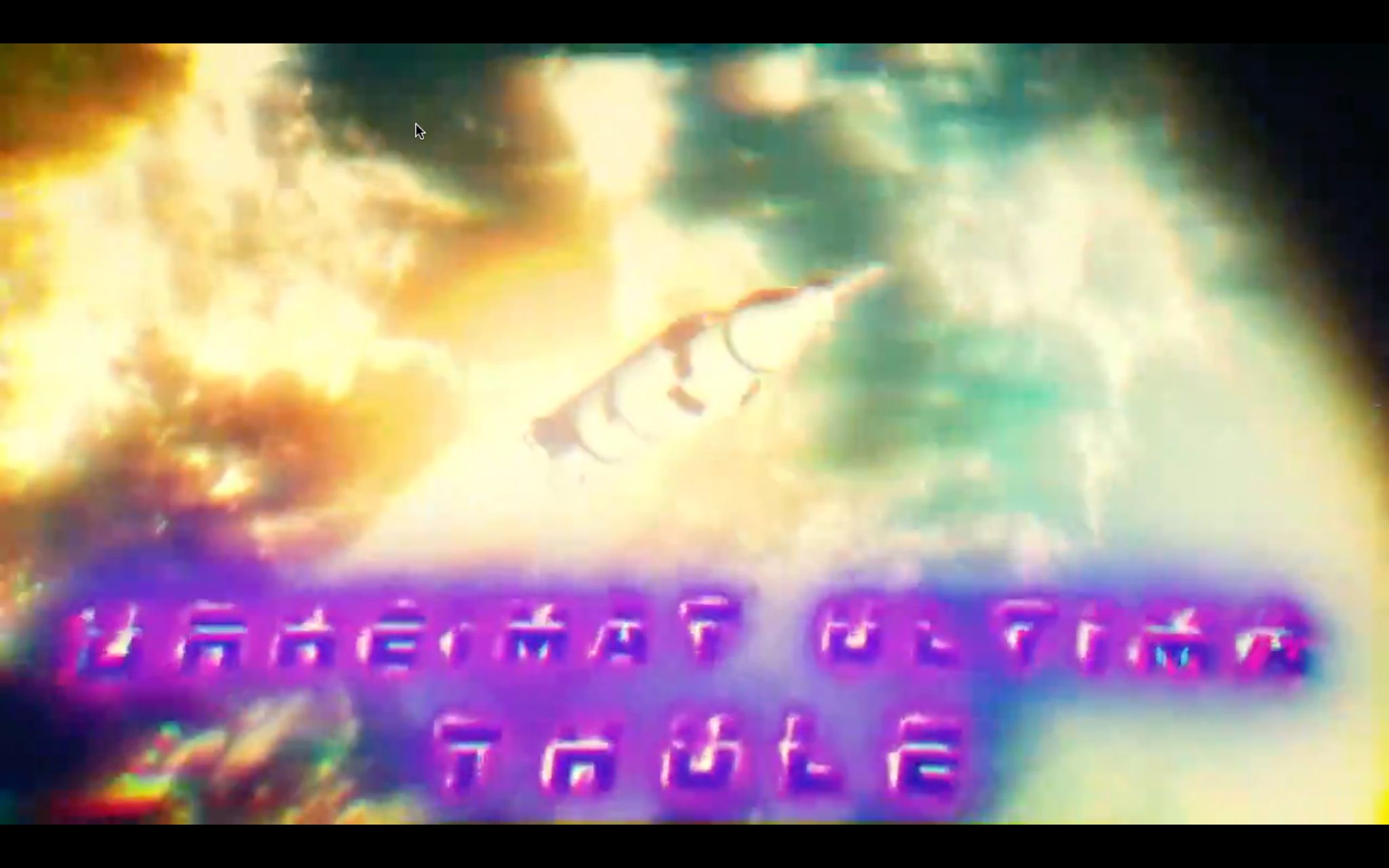 What puts all its symbolic parts together? If the surface is so shimmering, do they even need to fit?

Perhaps all its aesthetic sources are ways of scrambling the desire for transcendence. The transcendence is clear: the desire for ultimate originary meaning in the idea of Shambala; the desire for contact with mystical grey skin Aryans; anti-semitic platonism; ‘RETVRN’ memes, but with astronauts; bright purple text that reads ‘Urheimat Ultima Thule; and so on.

The videos project a nihilism that backs onto conspiratorial acceleration. It pushes through irony into fervent belief and back into irony, a loop whose capacity to disorientate has not lessened even though it became standard online a decade ago. Hyperborean mashup is not just explicable as a particularly intricate internet style, ten layers of irony deep, however. There are deeper roots, and longer historical frames, which reveal a lot more integrity to its grab-bag of references. 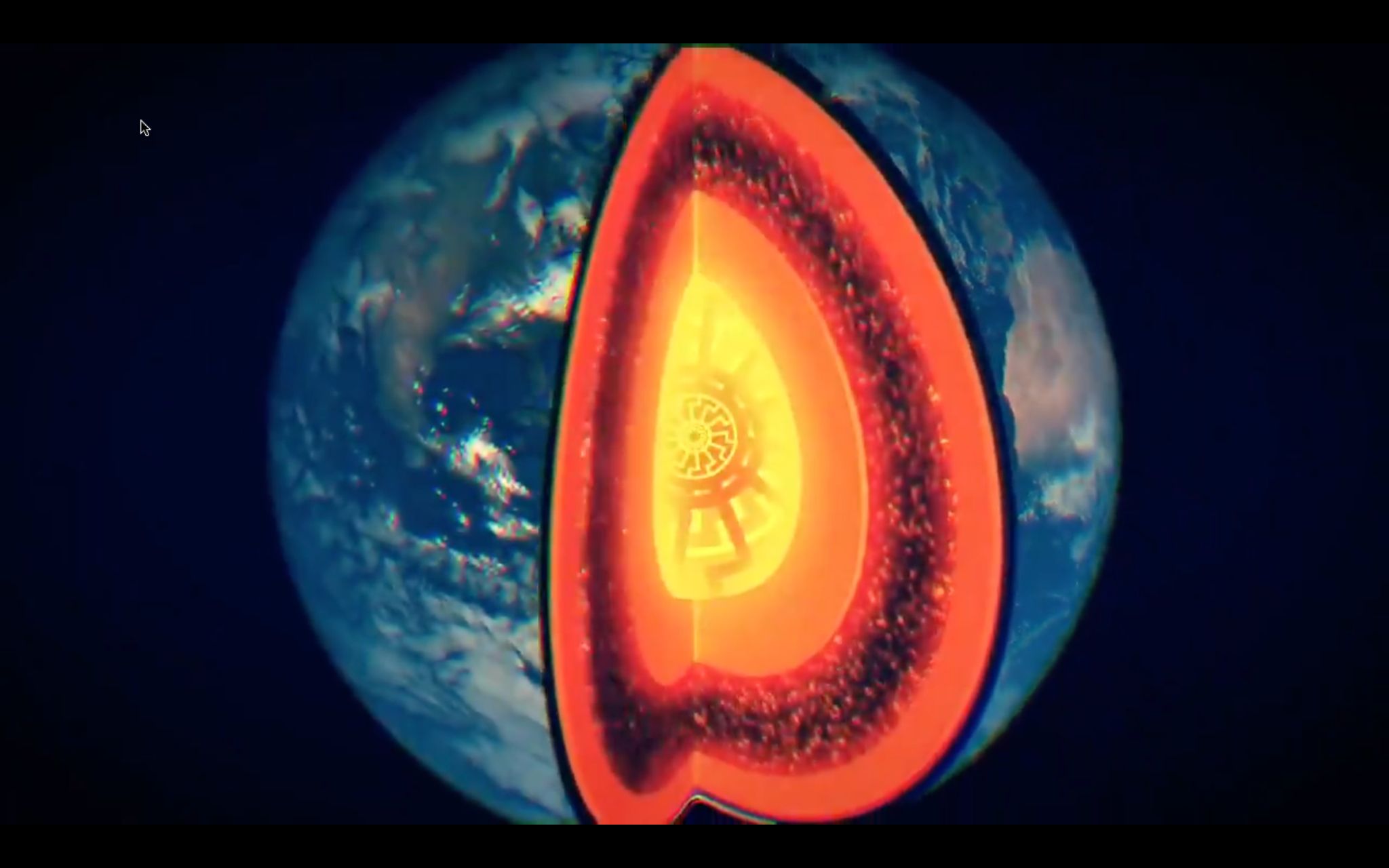 A cross-section of the Earth opens to reveal a Sonnenrand at the core.

Much as in the aftermath of the Second World War, when mystics like Savitri Devi and Miguel Serrano produced esoteric nonsense in response to the defeat of Nazism (Serano, for instance, believed that Aryan blood was extraterrestrial), QAnon and this new hyperborean nonsense tendency are the markers of a far right that has failed to achieve any kind of decisive transformation in the world of high politics and policy, and so look for signs of a deeper transformation elsewhere. As we have already noted, fashwave was incapable of producing a sense of an ‘elsewhere’ from which something other than unspeakable horror might emerge from fascism.

Hyperborean mashup not only traverses more rapidly the tempting and intricate terrain of high weirdness than could fashwave, it arrives in a period when this weirdness is undergoing a period of flourishing, not just on the far right, but for everyone. How could it not?

In the real world, the sense of tension rising towards calamity has been palpable for somewhere between  one and 20 years, depending on how you’re counting. Wave after wave of destabilising impossible events strike risk-society. All the while, official liberal culture rules an increasingly brutal world while smugly informing its proponent-audience of the egregious factual errors of its frenemies. The highest weirdness it can muster is Burning Man. Why wouldn’t you take a sharp right at the turning towards scintillating madness?

But make no mistake: although these videos are frenetic, exciting, even seductive, the swastikas are still swastikas. No matter how zany it might be to call for genocide with a gif of a twerking alien, it’s still a call for genocide.

The mistake that journalists made in covering the alt-right from 2015 right up until Charlottesville, was to believe that there was nothing serious in alt-right’s provocations, largely because they took place online. It was seemingly necessary for the swastikas which had been used as online avatars for years to appear on flags carried by young men in a park for them to be taken seriously. Let’s not repeat that mistake again. On the other hand, absolute humourlessness has rarely been effective.

Instead of stating the party line, then, let us note that these videos and this style reopen all the various quandaries and traps of discussion around far-right aesthetics that happened in 2015 and 2016. This time perhaps the left will not be caught so flat-footed.