In Todd Haynes' 1995 film Safe, Julianne Moore plays a housewife who increasingly feels that the modern world is making her ill, ultimately "leaving society" to join a community of exiles far away from the deleterious effects of car exhaust, pesticides, cleaning products, and wireless cellular signals. In the years since this film's release, the milieu of people seeking to escape ubiquitous poisoning by post-industrial society has only expanded, evident in the growth of movements foregrounding opposition to vaccines, 5G, birth control, microplastics, and much more. Recently, the publication of Tao Lin's latest novel, Leave Society, a meandering work of autofiction chronicling the author insert’s attempt to rescue himself and his parents from the Deesian hellscape of modern medicine and diet, garnered much hype from the emergent 3rd generation of -cellectuals meme pages, underscoring the salience of populist sentiments within the post-COVID sphere of underground artistic and literary communities. From a Leftist perspective, it’s useful to trace these developments; In many ways, skepticism towards official narratives surrounding health resembles a sort of mirror-world class consciousness, in which people come to understand their subject position at the mercy of a nebulous set of powerful interests.

Alternative health and nutrition communities have undoubtedly existed online since the beginning of the internet, however there are certain online spheres in which these interests have especially flourished. The discourses examined below can mostly be traced back to the influence of Bronze Age Pervert, of post-2016 "frog twitter," the trad/NRx/Groyper ecosystem often incorporating esoteric and heterodox reactionary perspectives with irreverent posting styles characteristic of image boards. In many ways, BAP embodies the archetype of the Right Wing Bodybuilder, or RWBB, a term which has come to describe a politically reactionary online male whose politics are sublimated into a fitness lifestyle. Over time, the right wing political perspective began to merge with a consumer identity, enabling many post-BAP right wing fitness influencers to establish lucrative personal brands as health redpillers and supplement shills.

The most evident heir to BAP's position as king of the RWBBs would be Sol Brah, who distilled BAP's worldview, largely centered around achieving bodily perfection via adherence to perennial masculine ideals, into a pure program of lifestyle practices which one can easily buy into by purchasing Sol Brah's branded supplements. While BAP is clearly a student of antiquity, Sol Brah feels more at home in the 2020s culture of manifestation and hustle (many of his followers call themselves "#LAMBROS," believing that through nutritionally-informed lifting in combination with crypto grindset they will become ripped and quickly afford a Lamborghini). Crucial to Sol Brah's success is the dispensation of redpills via lengthy threads. Knowledge dumps like these overwhelm them the reader, causing them to question their established assumptions, and opens them up to the suggestion that Sol Brah is holding the keys to well being, concealed from the masses by a malevolent class of elites. 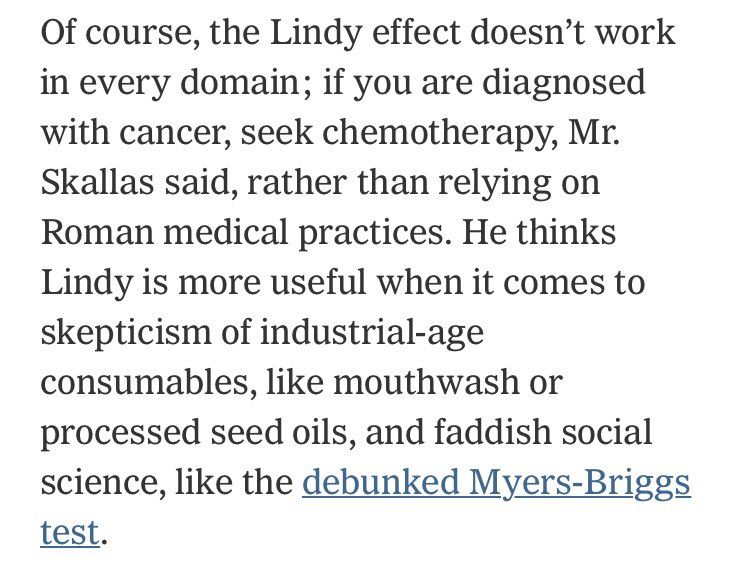 The issue of seed oils is a necessary precursor to understanding the titular Milk Wars of this essay, not only because Oatly, the controversial nu-milk dairy alternative, contains rapeseed oil, but because seed oils can be understood as a metonym of the process by which skepticism toward mainstream nutrition and health proliferates. Seed oils are a relatively modern invention, having initially been created as industrial lubricants, to extract the maximum amount of profit from the already-existing agricultural industries of flax and rapeseed. Over the course of the 20th century, seed oils became a major part of the modern diet, reaching near-ubiquity by present day as stabilizing additives in nearly every mass produced food product. It is this ubiquity that lends seed oils their power as a possible stand-in for all kinds of discourses surrounding health, modernity, and industry. The actual health impacts of seed oils, a poly-unsaturated fat, have been widely studied, with contradictory findings. Some evidence suggests that, when exposed to heat, seed oils with a high Omega-6 content (rapeseed/canola oil, sunflower oil, etc) can oxidize and form toxic compounds, potentially leading to a range of negative health outcomes. Examples of adverse effects of seed oil consumption, as stated by internet nutrition activists include cardiovascular disease, inflammation, torpidity, increased risk of sunburn, endocrine disruption, neurodegenerative disease, cancer, and literally turning into plastic in your body (xenoestrogens). The following tweets illustrate how alternative health claims such as those surrounding seed oils are expressed online, and serve to reproduce ideological shibboleths surrounding industry, nature, and even race. 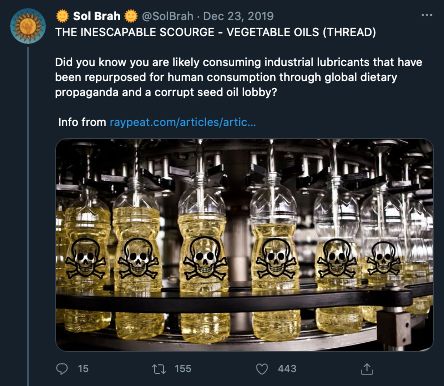 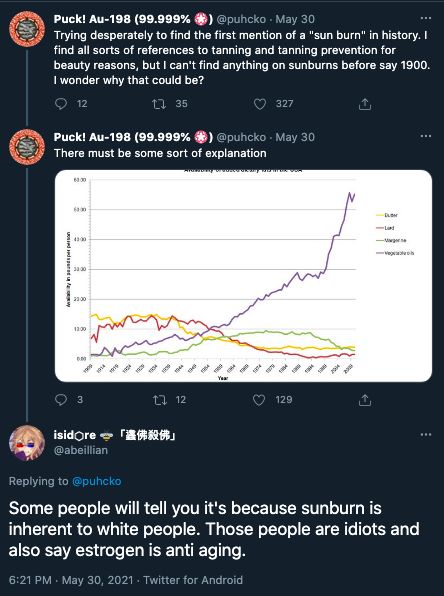 User discovers the correlation between dietary seed oils and the apparent advent of white people getting sunburns. Because the hyperborean aryans are a solar culture, per Evola, there must be some other explanation for fair-skinned peoples’ intolerance of UV radiation. Clearly it’s seed oils. 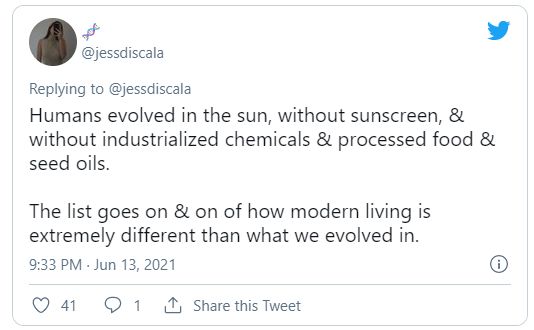 Another user makes the same connection 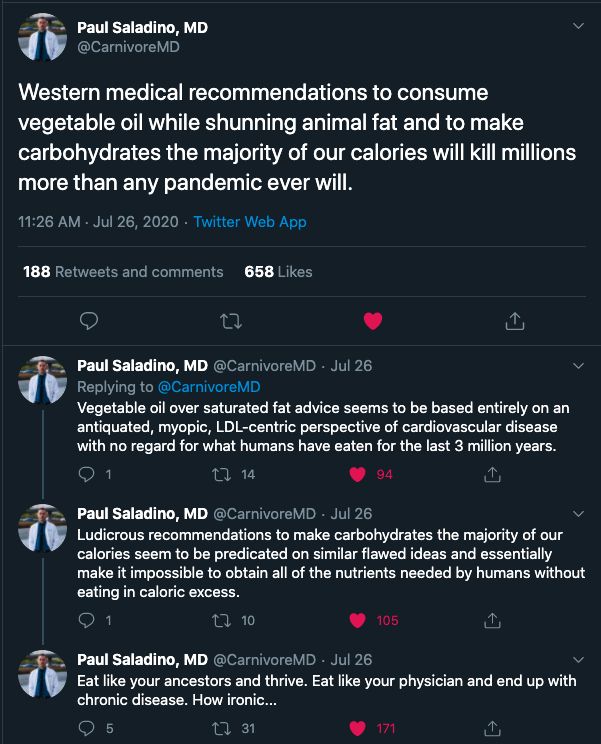 Trads and esoteric health enthusiasts are fanatical about dairy. Clearly, keeping cows for their milk and meat is very lindy. At the same time, lactose tolerance is more common among certain racial groups than others. People from Northern Europe tend to have an easier time digesting lactose, meaning tolerance of dairy-rich diets is seen as a marker of genetic superiority for high caste aryans. Esoteric twitter wignats will point to passages from the Rigveda as evidence that their ancestors were supremely milk pilled. Though modern dairy farming practices tend to involve large scale industrial farming, from growing grains and soy to feed livestock to the factory farm conditions where cows are raised and dairy is processed, the idealized image of the pastoral cattle herding lifestyle remains a powerful symbol for RETVRN type reactionaries.

Want to make it even more based? Try RAW milk. As we’ve observed elsewhere (see: Raw Egg Nationalist profile in the DNR Lindy feature, linked above), RWBBs and trads love when foods are raw. Proponents believe the milk pasteurization process removes helpful bacterial cultures that are beneficial for our gut microbiome. Ironically, lactose-intolerant individuals have reported an increased ability to tolerate dairy after drinking raw milk for a few weeks, negating the racial disparity in ease of milk digestion. 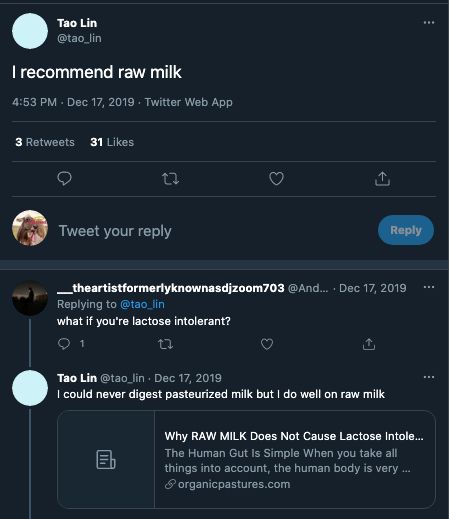 Raw Milk is illegal to sell for Human consumption in the United States. For this reason, services like GetRawMilk.com have sprung up to connect redpilled milk consumers with their favorite dairy product. The owner of GetRawMilk.com has also written for RWBB website Herculean Strength. 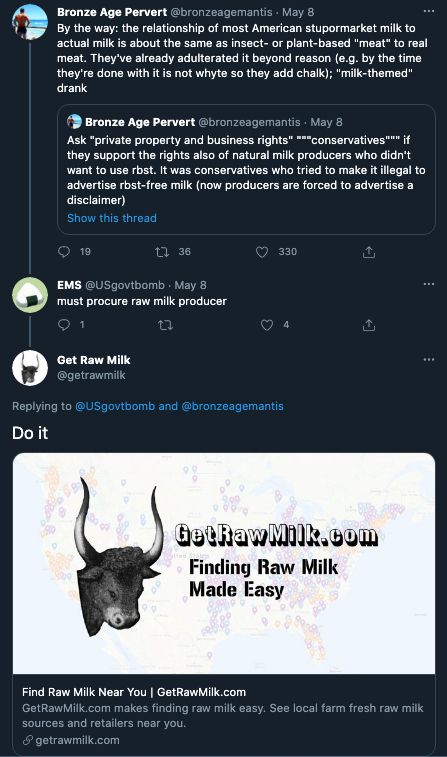 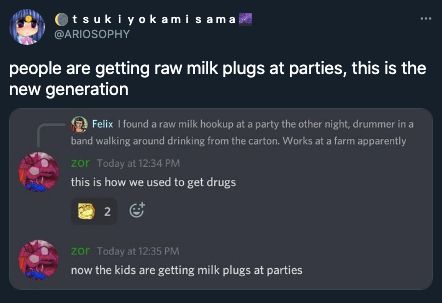 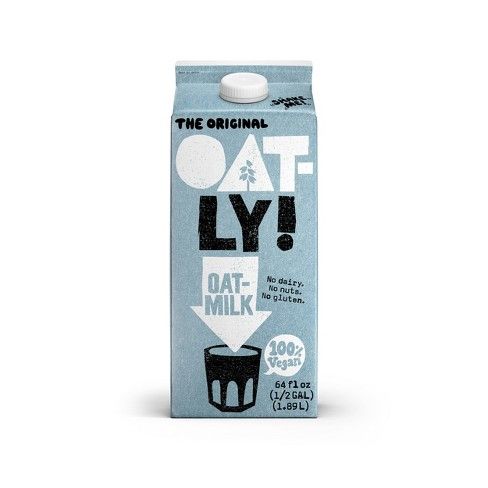 Oatly: Swedish Oat-based alternative milk brand presents itself as a greener, healthier and vegan alternative to the OG.

The term "milk wars" did not originate on Twitter. Though Oatly has grown extremely popular in international markets, within Sweden, where dairy has traditionally served as a dietary staple and a powerful symbol of the nation’s shared culture, the milk alternative’s initial release met with significant backlash. The Swedish dairy lobby fought back heavily against the attempted redefinition of milk, even suing Oatly for disparaging dairy (see article here).

The other contender in our conflict, Alima (Milkonaut), is a Swedish programmer affiliated with the Exoscience community, and the larger network of “network spiritual” “cyber-steppe” web 1.0 revivalist homepages. He created the website soma.cx, and SomaChat, a live typing chat client which recently featured in Remilia Collective’s inaugural gallery show/NFT auction. 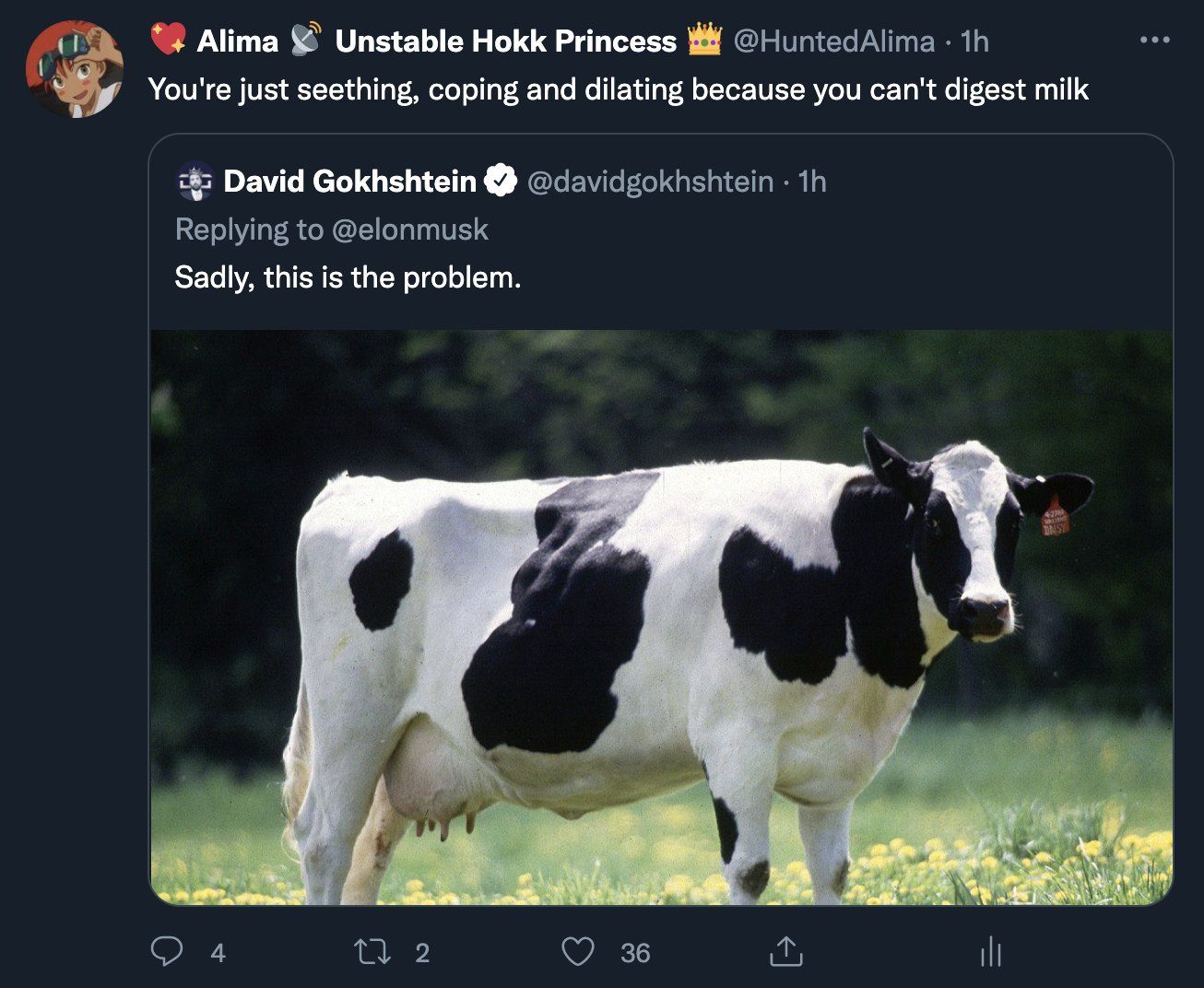 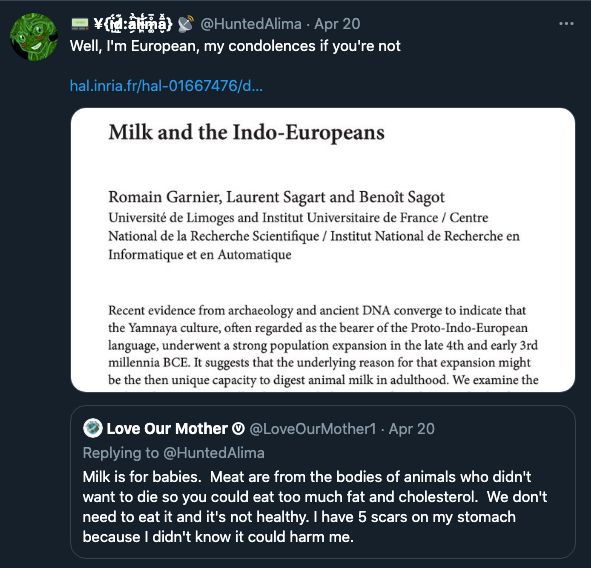 On January 28, 2021, a tweet from Oatly UK provoked an incensed reaction from Alima, leading to a spectacular flame war between the dairy-obsessed troll and the unwitting Oatly employee manning the company Twitter account. The interaction generated significant excitement from Alima’s comrades in the dairy supremacist community, many of whom cheered him on from the sidelines and even joined in. 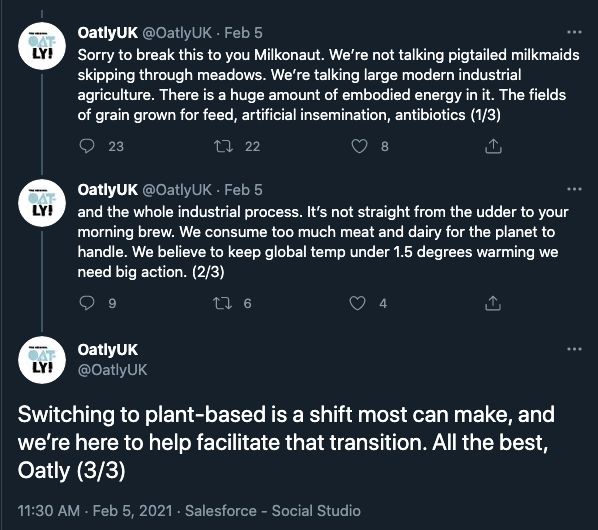 One of Oatly’s replies, still up

Collage found on the Know Your Meme page for the incident 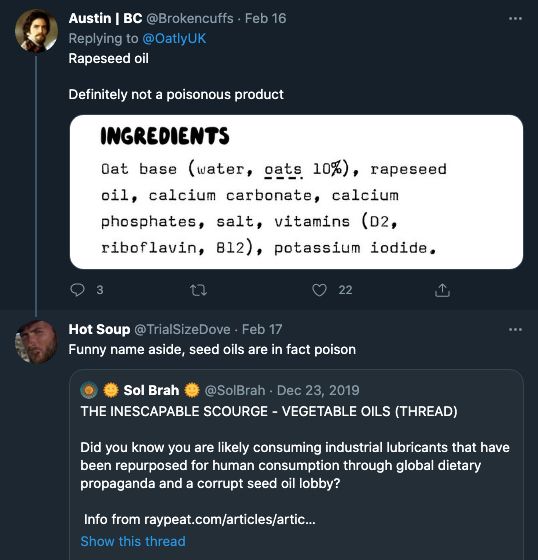 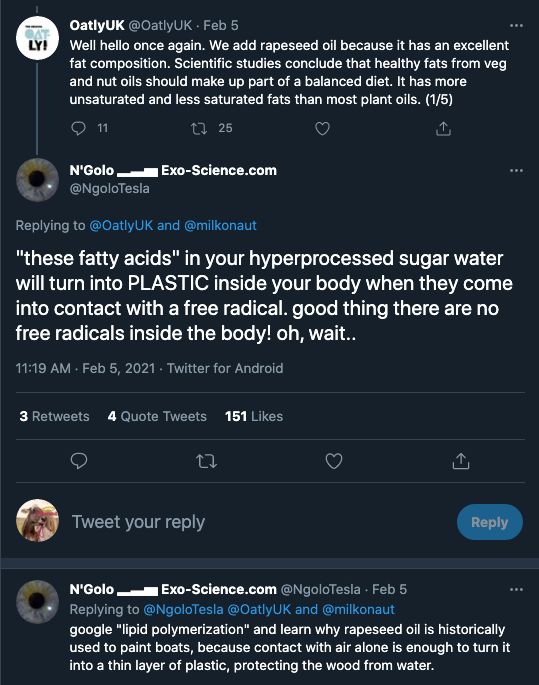 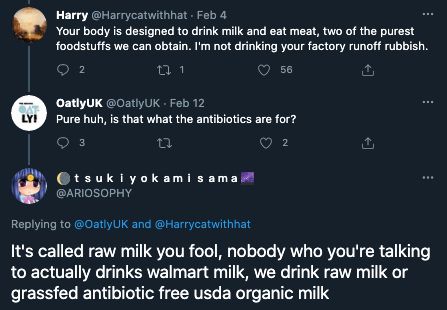 A few other notable replies from the thread

Though the entire exchange did serve predominantly as a social media spectacle, and a moment of triumph for a rebellious contingent of like-minded Twitter users, this moment also captures an assortment of deeply-felt sentiments surrounding our relationship to food production and personal diet in a consumer economy. It’s easy to imagine that many people feel similarly to Milkonaut, desiring more agency in determining what we and our loved ones consume, in the face of ever present marketing from corporate food producers who will always prioritize profit and the creation of new markets over the genuine well being of ordinary people, families, and even the environment. I believe that this is an especially revealing cross section of our lives under capitalism, as eating and health both touch individuals in a deeply bodily and intimately felt way. For this reason, I suggest that Leftists look toward health and nutrition as possible sites of political education and struggle. 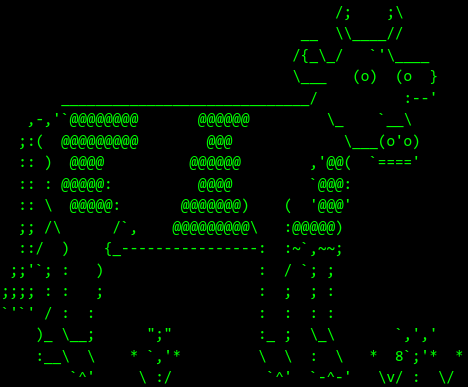