Editor's note: This was originally published on the virtuesignal.substack.

At the end of the twentieth century, plant-based milk was a marginal food product. Soy milk was the only variety widely available, and it was marketed almost exclusively to lactose-intolerant people and vegans. Two decades later, plant-based milk has spectacularly and profitably entered mainstream consumer society and popular consciousness, proliferating into a number of varieties including, most notably, almond milk and oat milk. Globally the plant-based milk market is expected to grow by over 10% per year for the next three years, reaching $21.52 billion in 2024. In the U.S., oat milk sales alone jumped 131% last year.

Who are all these new plant-based milk consumers? They’re certainly not all lactose-intolerant people and vegans. Plant-based milk’s popularity is widely interpreted as one aspect of the so-called flexitarian trend, in which people try to reduce their meat and dairy consumption in response to growing environmental, ethical, and health concerns. Indeed, these are the same concerns most often promoted in plant-based milk marketing campaigns. Through such campaigns, plant-based milk is depoliticized and naturalized as a solution to climate change, animal suffering, and human health issues. (See footnote 1)

I’m interested in addressing plant-based milk as an emergent neoliberal fetish commodity within our capitalist, pre-environmental-collapse system of objects. As such, all that plant-based milk offers consumers is the idea of a relation to the causes of their concerns. It is precisely this idea of a relation that is consumed in the fetish commodity as the possibility of establishing a lived relation with the causes of concern is completely annulled. 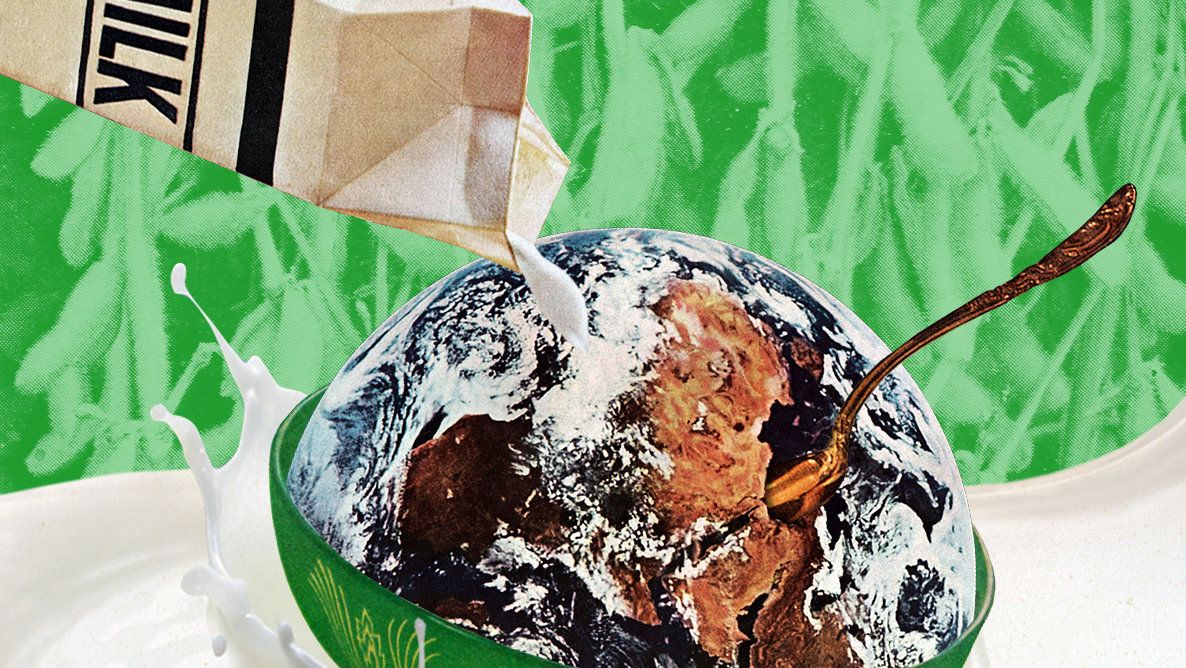 Exchange value converts objects into commodities and commodities become transcendent signs (or as Marx says, “social hieroglyphics”) in the semiotic field we call society. In relation to one another commodities constitute a classification system that rigidly and efficiently codes human behavior and groups. The meaning of a commodity is simply its difference from other commodities, and that meaning is magically transferred to the consumer when they buy it. Within commodity fetishism consumption becomes the primary means of personal and collective expression. Following Baudrillard, I understand commercial products as a category of objects which induce categories of persons: “[Commodities] undertake the policing of social meanings, and the significations they engender are controlled.” (See footnote 3)

Plant-based milk (among many other commodities) addresses itself to an intensely anxious, dissatisfied, and guilt-ridden consumer subjectivity. It reaffirms and normalizes a neoliberal ethic in relation to the ongoing climate catastrophe. It individualizes planetary-scale environmental, health, and animal welfare issues. It entrenches market mechanisms as viable solutions.

Milk itself is a potent sign. The history of milk is much longer than human history. It bears deep associations with animals, reproduction, infancy, and the feminine. Milk is the only food that the body can produce without the aid of technology. Milk troubles modernism’s heavily secured boundaries between human and animal, between culture and nature. Plant-based milk attempts to restabilize these boundaries by deanimalizing milk. For this reason, plant-based milk is a thoroughly masculinist and modernist commodity. No wonder it seems to be able to integrate so smoothly within urban societies dominated by new technocratic humanism. 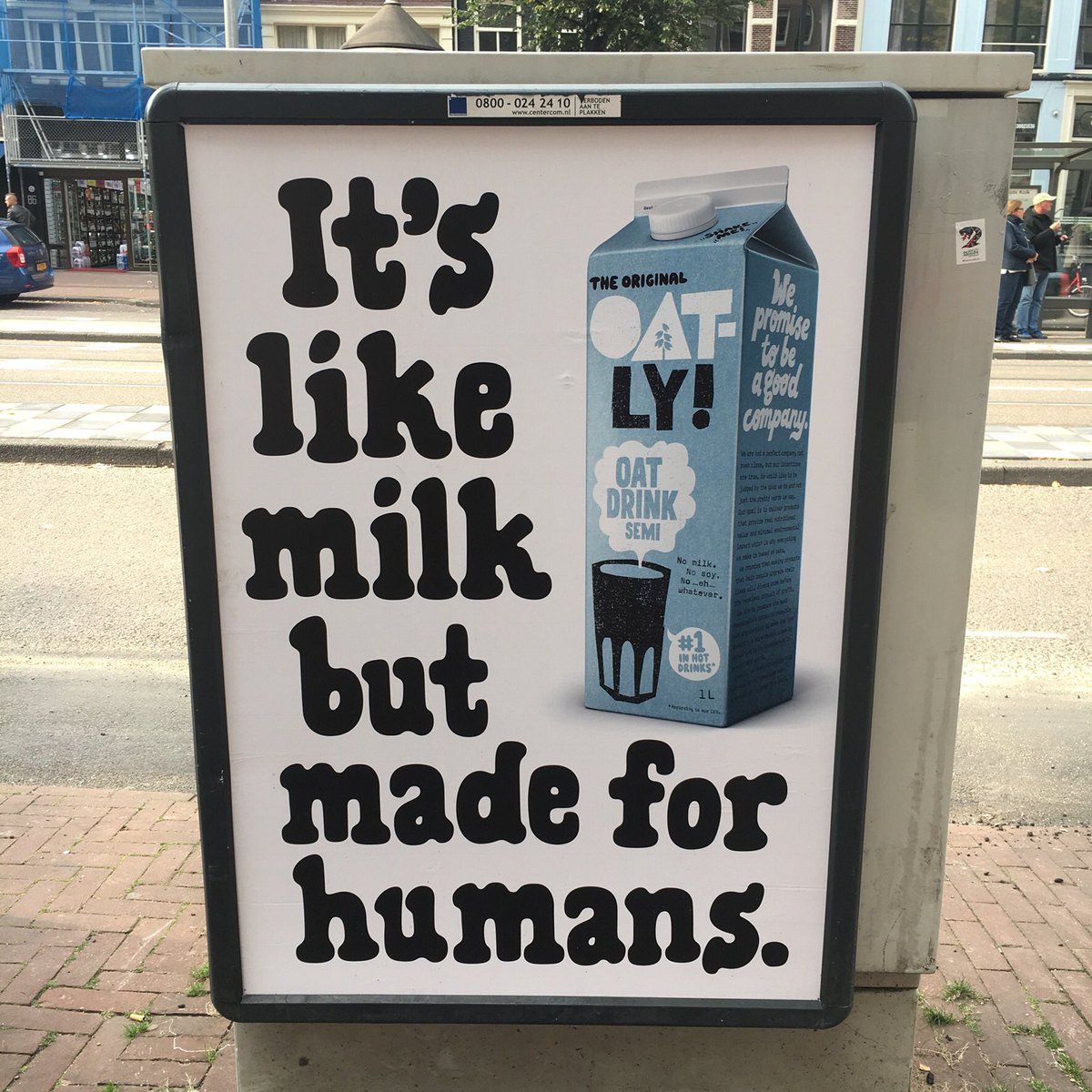 Plant-based milk emerges in dialectical tension with milk at a time when the dairy industry is facing an economic crisis. Small-scale dairy farms are closing because of rising costs, overproduction, and decreasing consumer demand while the largest dairy farms grow exponentially. Small farms in and beyond the dairy industry are turning to the experience economy to try to remain in business as consumers increasingly prefer the image of small-scale agriculture over its actual practices and products. Meanwhile, consumers are drinking a lot less milk and the greatest reductions in consumption are among the youngest generations. Between 2017 and 2018 milk sales dropped by 8% in the U.S., a loss of $1.1 billion, while plant-based milk sales rose by 9%.

Plant-based milk advertisements often try to demystify milk’s own fetish commodity status by bringing attention to the material and social conditions endured by animals in the dairy industry. The rhetoric here is similar to that of cancel culture with some framings explicitly associating milk with sexism. Concern for dairy farmers is conspicuously absent. Their acknowledgment would naturally raise questions about the conditions that almond, oat, and soy farmers and those who work in plant-based milk factories also endure. The future will undoubtedly include further revelations about unsustainable production practices and the exploitation of labor within both the milk and plant-based milk industries. Connections between the drought in California and the obscene amount of water needed to grow almonds were noted as early as 2014. 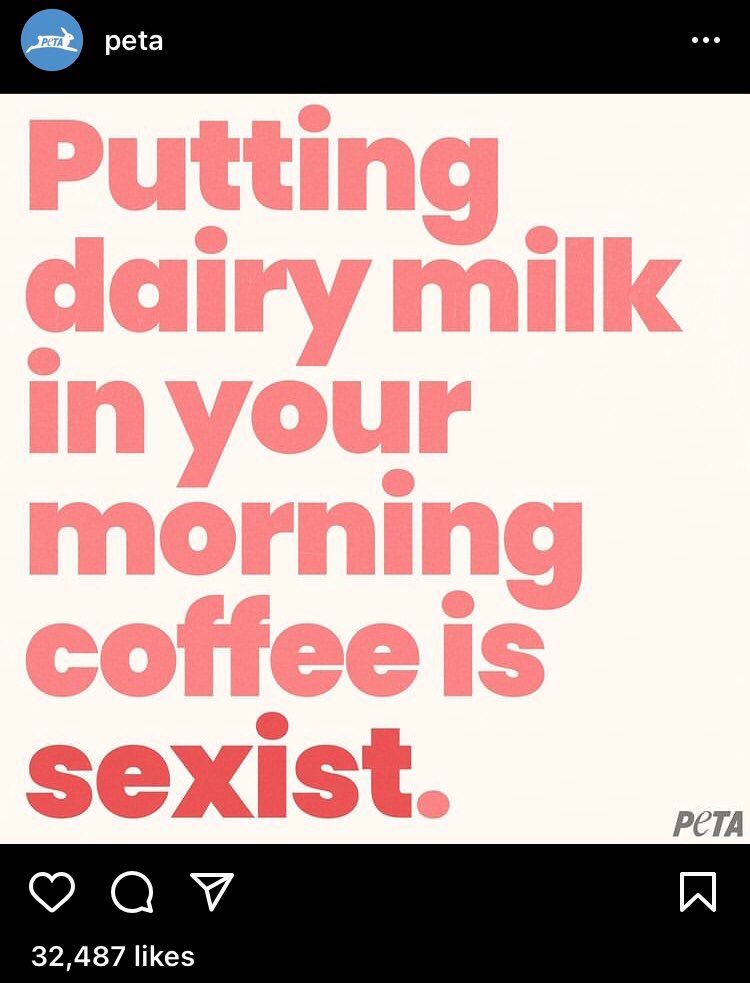 In this context, the corporate media and the scientific-industrial complex have gone all-in on studies and messaging that promote individualized responses to the irreversible environmental catastrophe. Consumers are constantly and manipulatively individualized and responsibilized for the global, systemic, irreversible, existential problems caused by capitalism. One particularly influential and representative article appeared on the front page of the State-affiliated Guardian in 2018 under the headline “Avoiding meat and dairy is the single biggest way to reduce your impact on Earth.”

The plant-based milk era embodies a triangulated crisis of value; the undervaluation of small-scale agricultural work (especially that which involves animals), the overvaluation of disruptive technological ‘solutions,’ and the disavowal of twentieth-century forms of industry.

Plant-based milk has been able to inherit all of milk’s positive semiotic associations (e.g., wholesome, healthy, tasty, convenient, pure, etc.) while constructing itself as an emblem of techno-scientific progress, enlightened responsibility, and environmental sustainability. Milk is framed as risky, inhumane, regressive, and environmentally damaging, while plant-based milk is framed as modern, compassionate, clean, and responsible. Needless to say, it also typically costs more than milk. Plant-based milk now offers the consumer the freedom to enjoy their life — responsibly, and if they can afford it — beyond the guilt of milk.

Bourgeois neoliberal society and those afflicted with technocratic false consciousness celebrate plant-based milk and interpret its availability as a sign that market-based solutions to the ongoing environmental catastrophe are actually working. Rather than plant-based milk becoming just a symbol of modernist progress, the corporations that produce it become the new agents of history, leading consumers into a fictional ‘post milk’ utopia where climate disaster has been completely avoided thanks to the economic implosion of the dairy industry.

As industrial dairy farming becomes increasingly associated with environmental degradation, consumer dollars, venture capital, and various other forms of investment flow towards plant-based milk corporations that self-consciously adopt Silicon Valley’s aesthetics and vocabulary of ‘disruption,’ ‘corporate activism,’ and most absurdly ‘revolution.’ People and institutions know deep down that something needs to change and it’s actually good that they’ve begun to understand their relation to the environment through food. But advertising simplifies the situation profoundly. It works to convince consumers that avoiding environmental collapse is as simple as buying a new type of deanimalized milk. 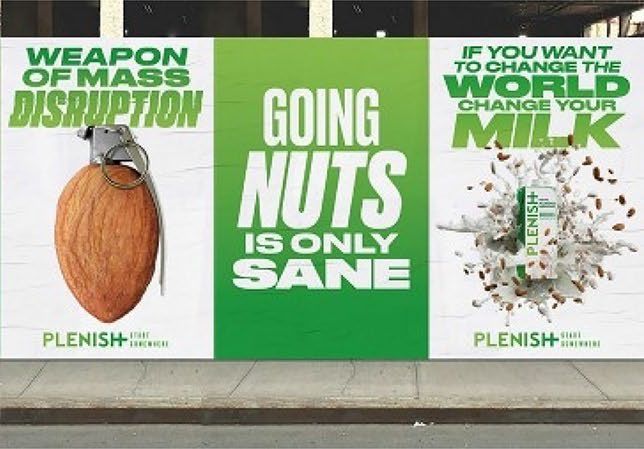 The revolutionary imperative is alive, but unable to realize itself in practice; it is consumed in the idea of Revolution. As idea, Revolution is in fact eternal, and will be eternally consumable in the same way as any other idea. All ideas, even the most contradictory, can coexist as signs within the idealist logic of consumption. (See footnote 4)

There are no solutions here as there are no thinkable limits to consumption. Commodities as signs proliferate indefinitely to annul lived relations and fulfill the absence of reality.

I didn’t write this piece to shill for the dairy industry or just to shit on plant-based milk. One could apply this analysis to any number of contemporary commodities. I want to encourage people to establish lived-relations with their environment, especially with the sources of their food. I feel like I could write about anything and it would be about the end of the world. Like Clarice (See footnote 5) said, I am the one who animalizes myself. 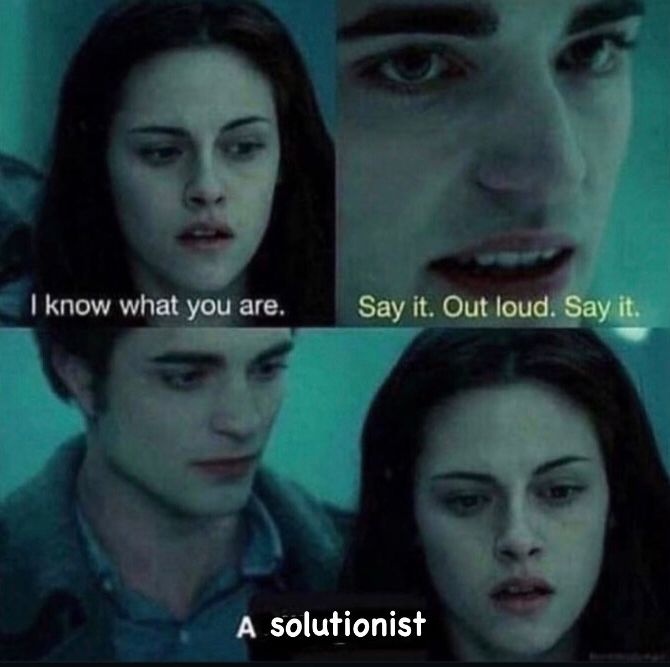 2. See Marx ‘The Fetishism of Commodities and the Secret Thereof’ in Capital, Volume One.

3. See Baudrillard ‘The System of Objects.’