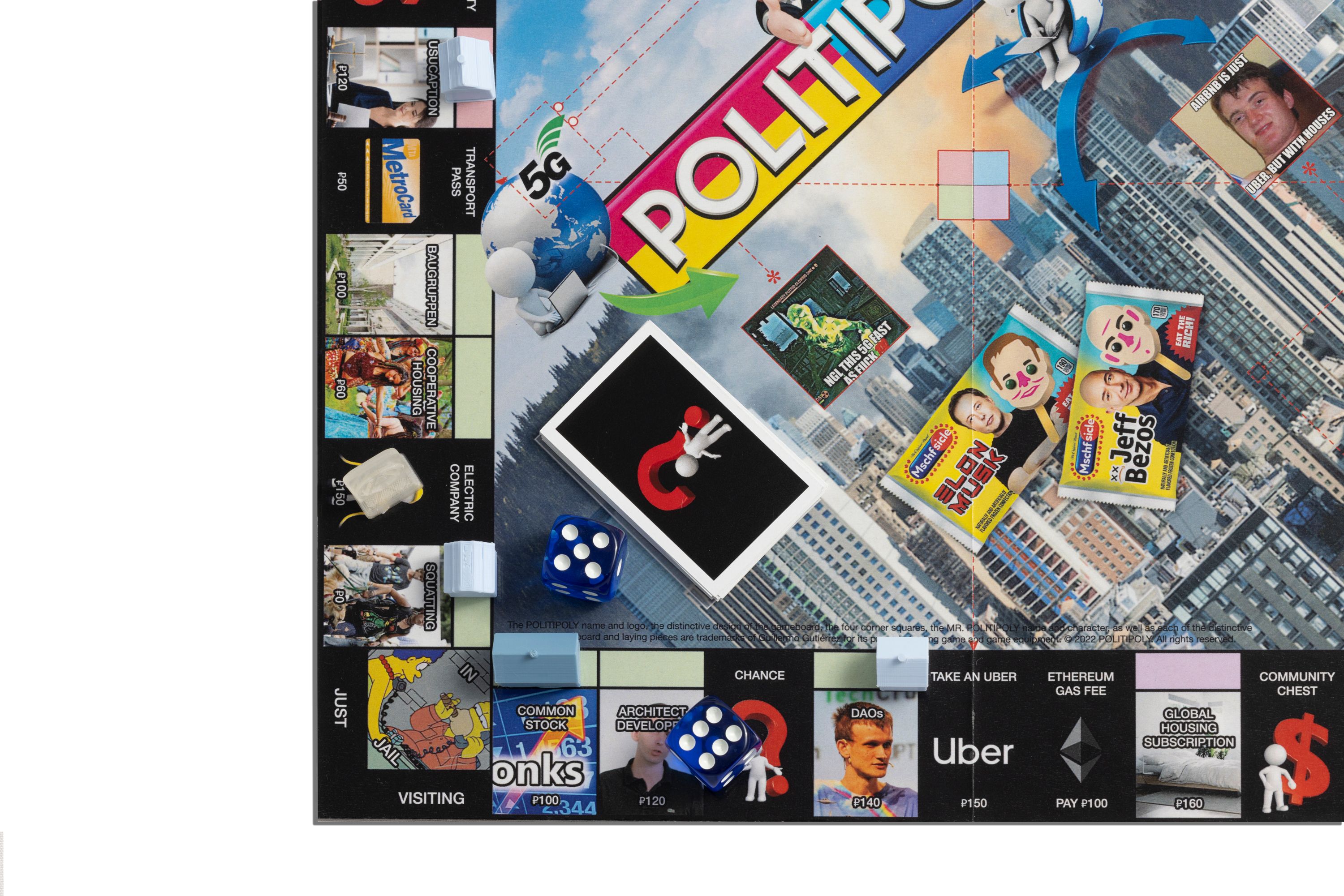 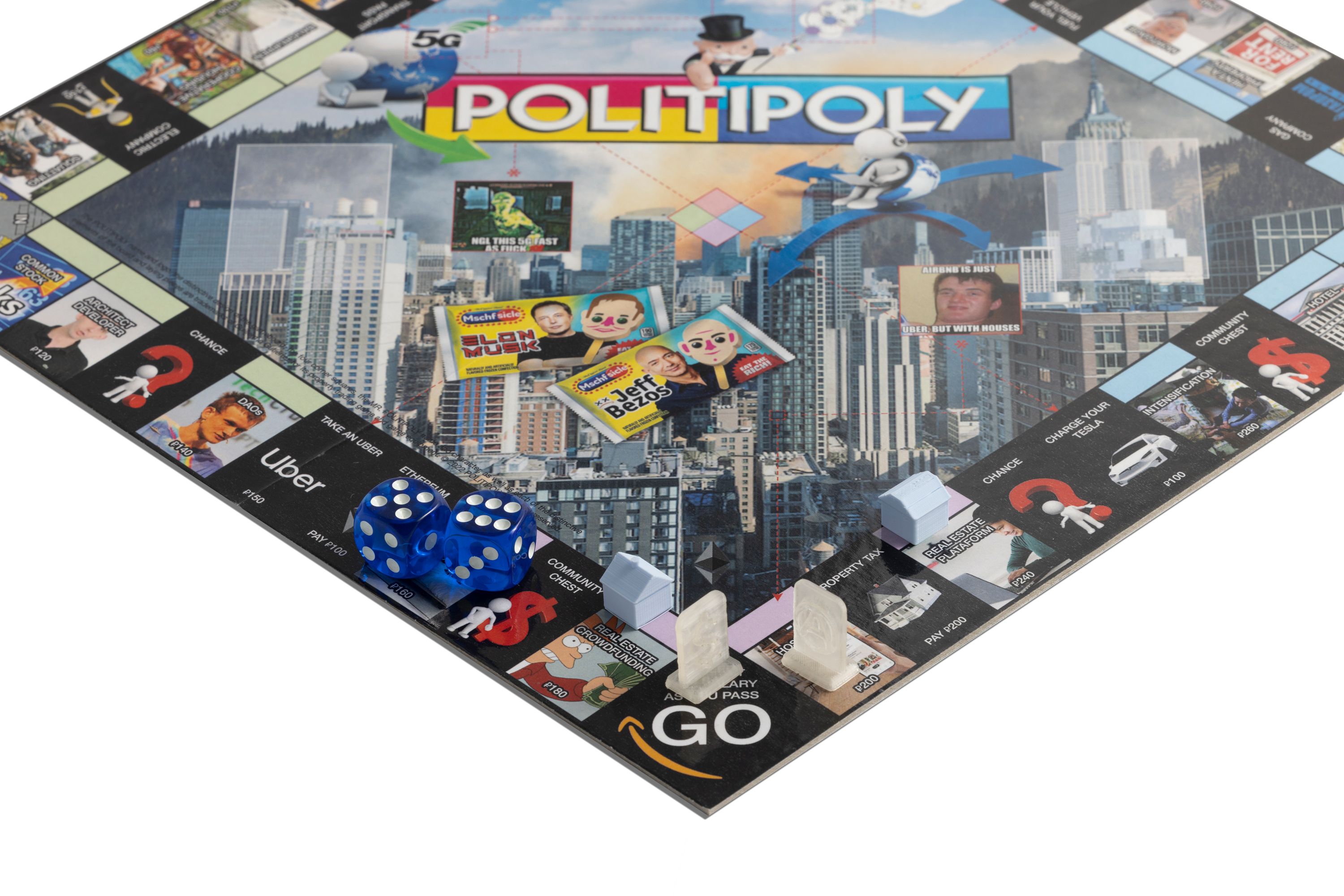 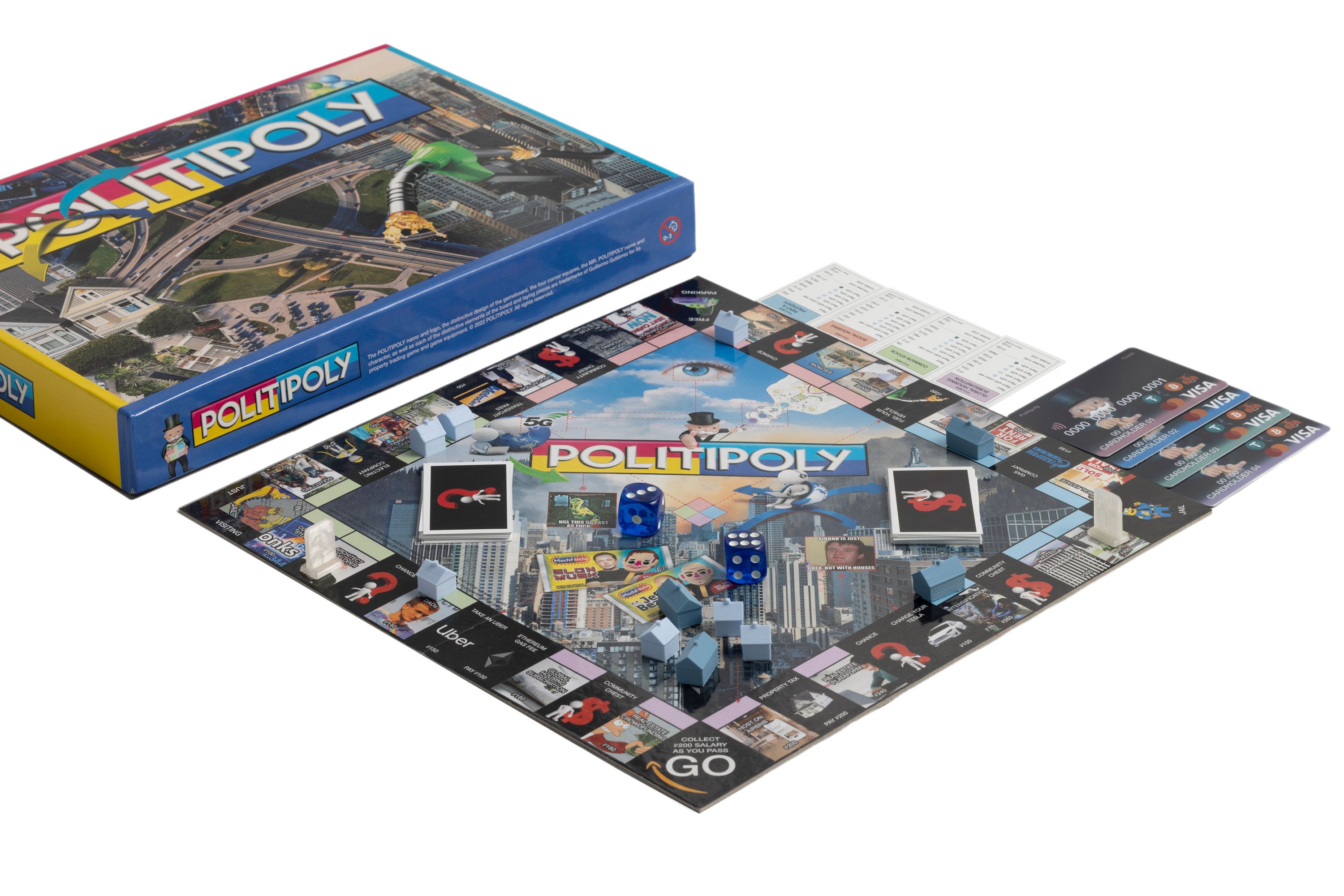 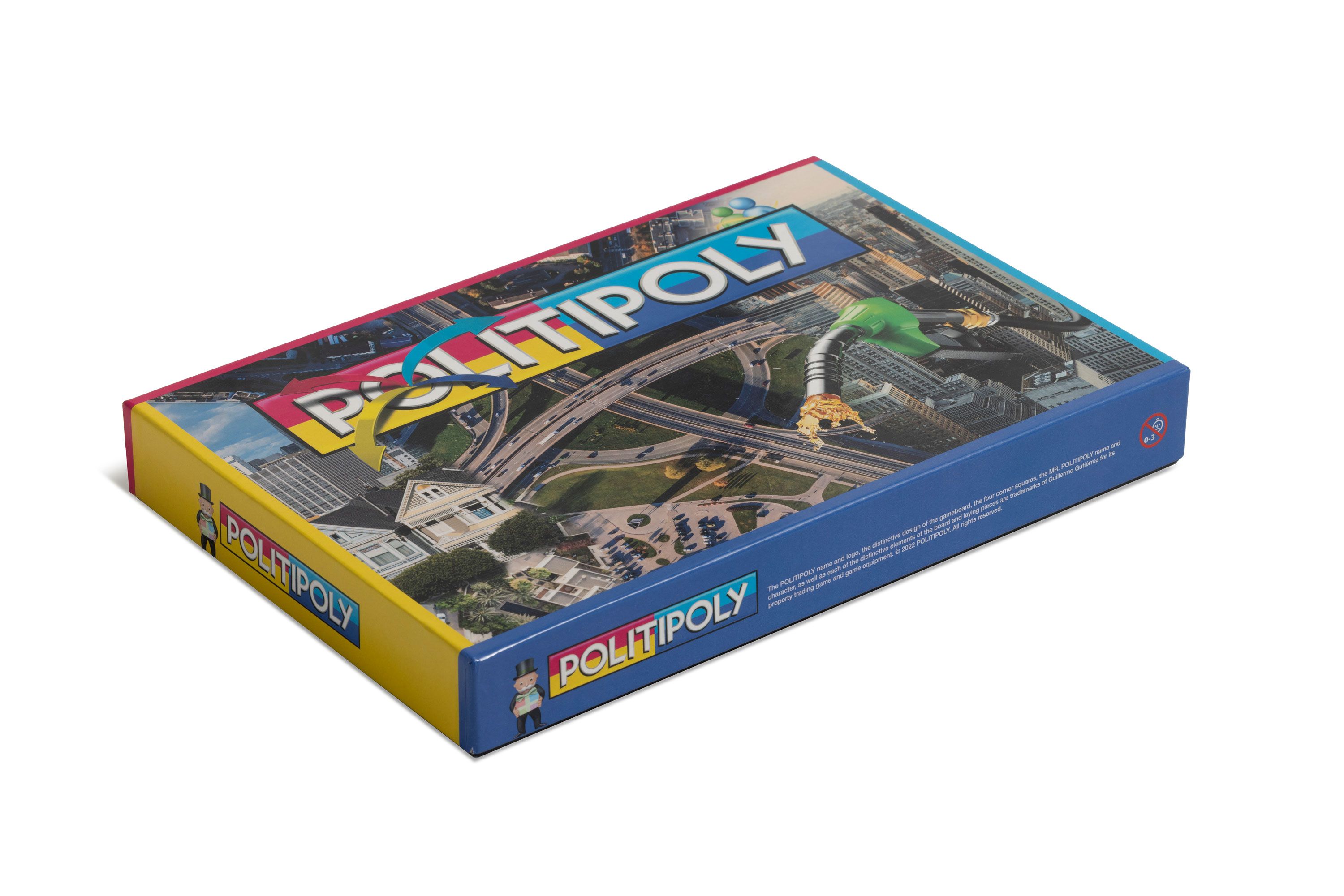 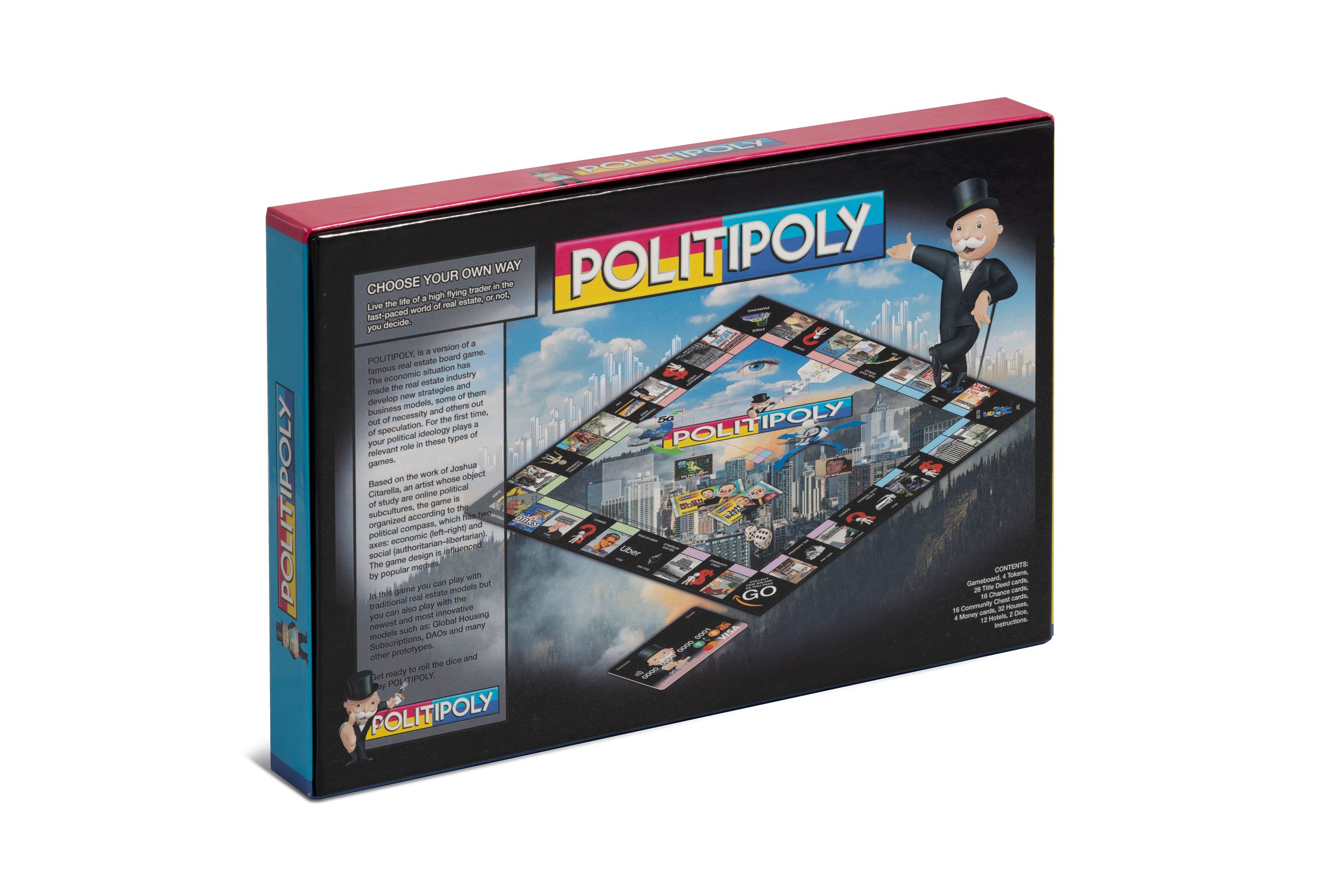 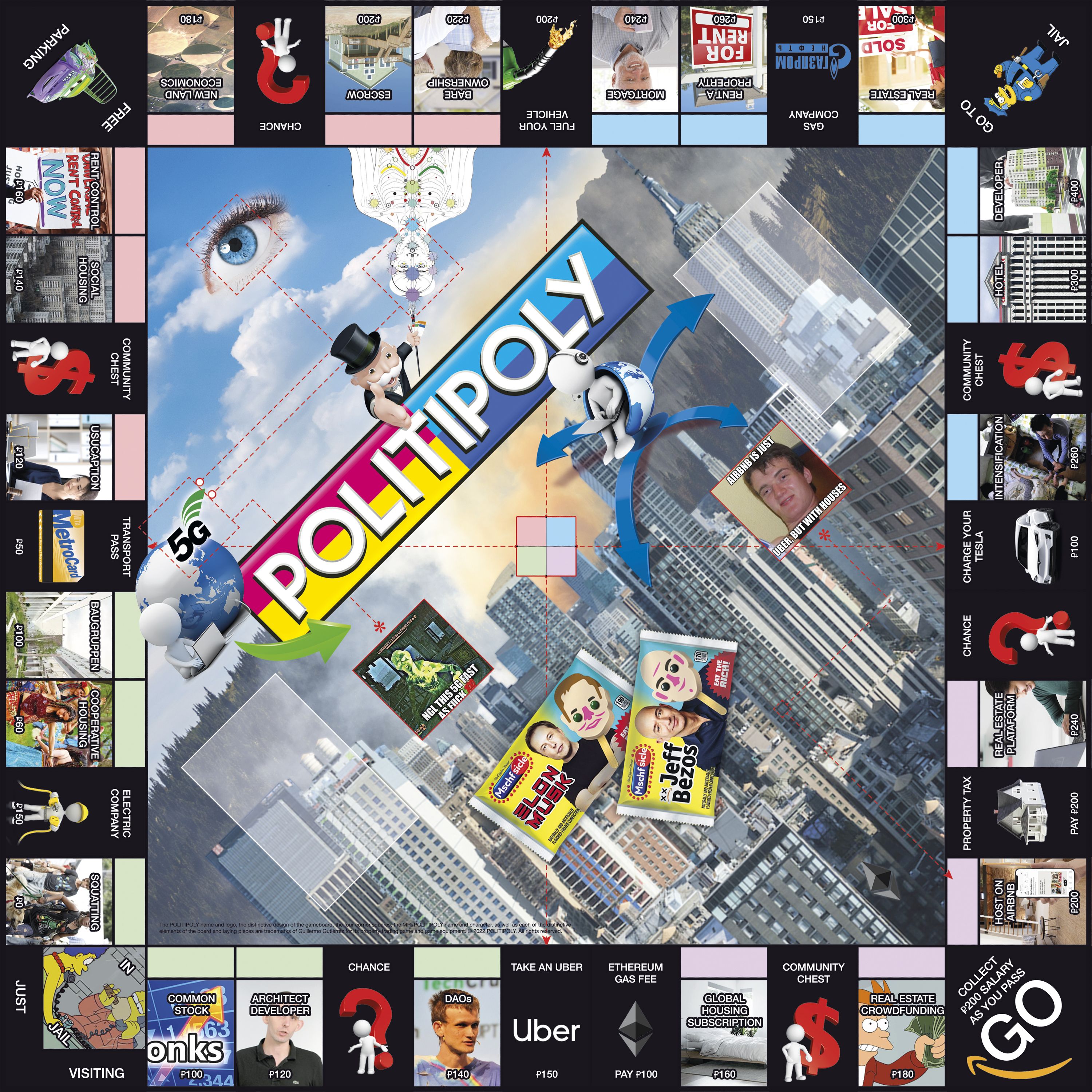 POLITIPOLY is a version of a famous real estate board game. This idea was inspired by the difficulty of access to housing that young people have been facing for years and that is becoming a long-term issue. The two best-known models for housing are the mortgage and the rental, both linked to debt due to the increasing prices in the housing market that has been exponentially growing since 1970. While the income of families has hardly changed, this rise has led the later generations to encounter growing inequality and a difficulty to access affordable housing.

Young people currently seem to be condemned to rent and unable to own a property in the near future. Probably, for the vast majority of them, the first time they got in contact with the real estate market was through a famous board game: MONOPOLY. For this reason, a sampling of this game is being proposed here for the near future and the now: POLITIPOLY.

The aesthetics and organization of the board uses the current language of the internet and, mainly, of memes. This game board is organized according to the political compass, a diagram widely used in the world of memes that has two axes: economic (left–right) and social (authoritarian–libertarian). Thanks to this diagram we are allowed to organize the board by placing the different real state models according to their position in the political spectrum. The future compass is also a feature in this board, a two-dimensional meme chart that depicts various futuristic scenarios. It is also organized on two axes which usually are: hyperhuman-unhuman and acceleration-deceleration. In this case, though, these axes are substituted by the same axes of the political compass. Therefore, the board becomes a mix between the political and the future compasses.

In this way, the gameboard shows the twenty-two current or future real estate trends explained below, beginning at the starting box:

01. Real Estate Crowdfunding: It uses social media and the internet to connect investors to property investments. It is similar to equity investing since an investor can buy into a property and become a shareholder. Crowdfunding offers companies the access to capital that otherwise they may never be able to raise. E.g.: crowdestate.eu

02. Global Housing Subscription: A distributed housing system all over the world where you share a portfolio of houses with other subscribers and you are able to choose where you live. E.g.: Earth, a project by Christopher Kulendran Thomas.

04. Architect Developer: They work with investors or by themselves and are more involved in the whole construction process. Their intention is to lower the costs in order to be able to offer homes at more affordable prices. E.g.: Jack Self, architect based in London.

06. Squatting: The unlawful occupation of an uninhabited building.

07. Cooperative Housing: The property is owned by an organization and then sold as shares to the residents of the community. E.g.: La Borda in Barcelona.

08. Baugruppen: A model widely used throughout Germany where people come together to finance, buy, design, and construct the buildings they will ultimately live in. They are the developers and the advantages over traditional development are many. In addition to the obvious and significant savings, units can be designed around the individual needs of every owner.

09. Usucaption: Ownership of property which can be gained by possession of it after a certain period of time.

10. Social Housing: Housing provided by the government to people with low income or with particular needs.

11. Rent Control: A governmental program that places a limit on the amount that a landlord can demand for leasing a home or increasing the renewal of a lease.

12. New Land Economics: New models of property politics such as those proposed by the 19th century economist Henry George.

13. Escrow: Legal arrangement in which a third party temporarily holds property until a particular condition has been met.

14. Bare Ownership: A loan that you can borrow against the value of your home and receive funds as a lump sum or fixed monthly payment.

15. Mortgage: The legal agreement by which a bank lends money with an interest rate in exchange for taking title of the debtor's property, on the condition that the conveyance of the title becomes void upon the payment of the debt.

16. Property Rental: You regularly receive a fixed amount of money for the use of your property or properties by tenants.

17. Real Estate: The business of buying and selling of land and buildings.

18. Developer: A person who buys and develops buildings in order to sell them and make profit from them.

19. Hotel: An establishment that provides lodging and various personal services to travelers and tourists.

20. Intensification: The development of an existing building, site, or area which allows a density higher than what currently exists.

22. Host on Airbnb: Owners renting out their homes to travelers looking for a place to stay, usually on holidays.

Finally, it should be said that the project has been influenced by two artists: Simon Denny and Joshua Citarella. Simon Denny was of great help for the development of the board game format. By studying his project "Games of Decentralized Life" we learned a lot about the development of the board game that, like Simon's, is fully playable and has his own instructions. As for Joshua Citarella, his work on online political subcultures has been very useful on the final conceptualization of this project, on top of all his work related to the political compass.