Psychogeography as a concept is generally concerned with a collective emotional disorientation to our built environments and other people. As our social relationships have been increasingly reduced to commercial, object oriented, and vicarious experience, it follows that our imagination for what is politically possible has similarly been reduced. To experience an alternative, those who practice psychogeography propose unconventional ways of engaging with infrastructure that reconnects us with more fun, inventive, and spontaneous ways of navigating the world. Psychogeography therefore encourages a sort of walking “drift” for the sake of the experience itself, but I find that it’s principles can still be applied to other sorts of travel without betraying what is most useful about it.

To skitch on a bicycle, you’ll want to ride up next to a car (ideally as the car is accelerating after coming to a stop), and grab onto whatever you can, allowing the car to pull you along and on your way. You’ve probably seen this done in movies, usually with a skateboard, but a bike can handle higher speeds much more safely than a skateboard or roller-skates can. Like most things fun, there’s risk involved, so personally I only skitch certain roads where there’s a generous bike lane to bail into. It’s hard to describe what a skitch feels like (so maybe just watch some videos instead), but I like to think of it as a DIY rollercoaster I take to my job or other places. I’ve heard other people compare it to surfing.

One thing I particularly enjoy about this is watching peoples’ reactions when they realize they’ve been towing me. Some people seem confused or startled at first, but after I give a smile or a wave, most seem to get a real kick out of it. Other drivers don’t notice you are hanging onto their car, which is also entertaining in a different sort of way. These drivers seem hypnotized by the road in front of them, and I enjoy imagining what they might be imagining.

I zone out pretty easily so I admit this is usually how I drive too. Although I’m more careful on a skitch when I look over and see a glazed over look, in my experiences doing this, these types of drivers are not worse drivers than any other. They’re predictable, usually not texting, and easy on the accelerator. These are all important for making your own commute. Still, I often wish I could catch the attention of these drivers so that I could watch their expressions change as we share a brief and absurd moment together.

You could call this type of driving muscle memory I guess, but I think that term suggests a level of physicality not really possible while driving, so I think the term “automaticity” is a better fit. These drivers are essentially doing without thinking. If you’ve ever found yourself safely at your destination without memory of how you’ve gotten there, you’ve probably experienced this specific sort of disassociation too. Our attention has limits and our brains need some time to recover, so assuming you can still operate your car safely, maybe a little bit of automaticity is okay and normal.

The trouble is many people seem to experience this disassociation as their default mode of commuting. Many of us spend all day switching between tabs and severely spaced out at our jobs, so maybe it’s not surprising we’d also dissociate on our way to and from them. In his notes on Cronenburg’s Existenz, Mark Fisher connects this sort of partially automated consciousness to postindustrial labor. As Fisher writes, so called “cognitive” work can still demand our attention, expression, and emotion (or maybe more often, the simulation of emotion) without requiring our thought. In the movie Existenz, this sort of doing without thinking (or feeling) is shown through encounters with Read Only Memory characters, who are locked into loops of highly constrained and repetitive gestures and responses which can only be voiced after certain key phrases. The point here is alienated labor does not just eat away at subjectivity on the clock, but can hollow us out such that when our minds drift into themselves during our quiet moments alone, we may find that there is nothing there.

This isn’t to say zoned out people are without a complex inner life, autonomy, capacity for critical thought, or desires for real human connection. The notion some people are not “real” but instead are philosophical or behavioral zombies is an idea probably best left to the political right. In October of 2018, InfoWars hosted a competition searching for the best NPC themed meme to incorporate InfoWars and Alex Jones, where the winning submission earned ten thousand dollars.

The resulting memes are intended to dehumanize, and helps InfoWars listeners to imagine their opposition as lacking whatever essential thing that makes them human. So denying other people the complexity of human consciousness and emotional experience can be wrong, but I think it would also be wrong to say that it’s experienced by all in the way that it should be.

We live in an era where capitalism thrives by devastating our psyches. Where earlier forms dominated nature by transforming natural resources into commodities, modern capitalism increasingly consumes our thoughts and experiences. As Fisher also reminds us, the dominant biological explanations available to us to make sense of the resulting harms to our minds can individualize our plight and provide little room for political critique and social change.

If the left is to successfully politicize common attention and mood problems beyond the biological model, we should acknowledge why the NPC meme appeals to people in the way it does, and find ways to invite others out of the specific disassociation that is endemic to modern postindustrial “cognitive” capitalism. As it is now, the work commute is an extremely alienating experience for many people. But it doesn’t have to be that way. 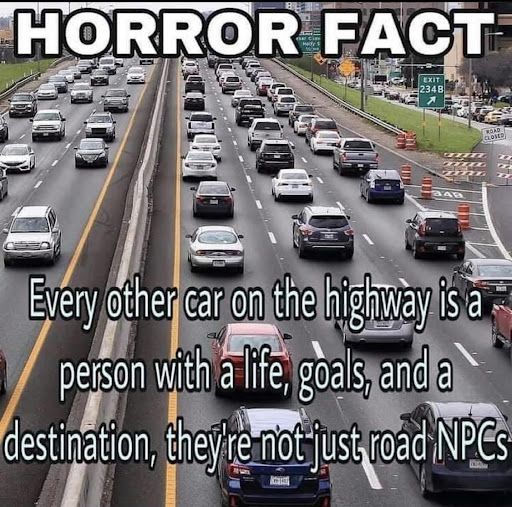