Noam Chomsky made a breakthrough in linguistics theory when he discovered that the brain is hardwired for language. As one ages, words connect to elements of consciousness like a flower blooming into the folds of the brain. Regardless of which language one grows up into, the same unfurling process takes place.

As networked conversations develop in complexity, a meta-consciousness is formed. This meta-consciousness has been given the different names throughout the development of the Internet from the chaste “hive-mind” to the incendiary “Twitter mob.” What then is the meta-language of this hive-mind, unfurling as cyberspace matures, emerging from within the architecture of the system?

Sketching narrative, data, and capital flows through digital space can hint at the patterns that might constitute this meta-language. Perceiving this meta-language is an effort in finding shadows cast in the narrative debris of hyper-capital, like photographing the void left behind the imperceptibility of a blackhole. Through this process we can struggle to access the meta-consciousness level of cyberspace, a crucial undertaking for political agency in the digital age.

In this report, I present three visualizations of how narrative, data and capital flow through digital information systems and offer strategies to subvert, detour or catalyze multi-directional liberation. 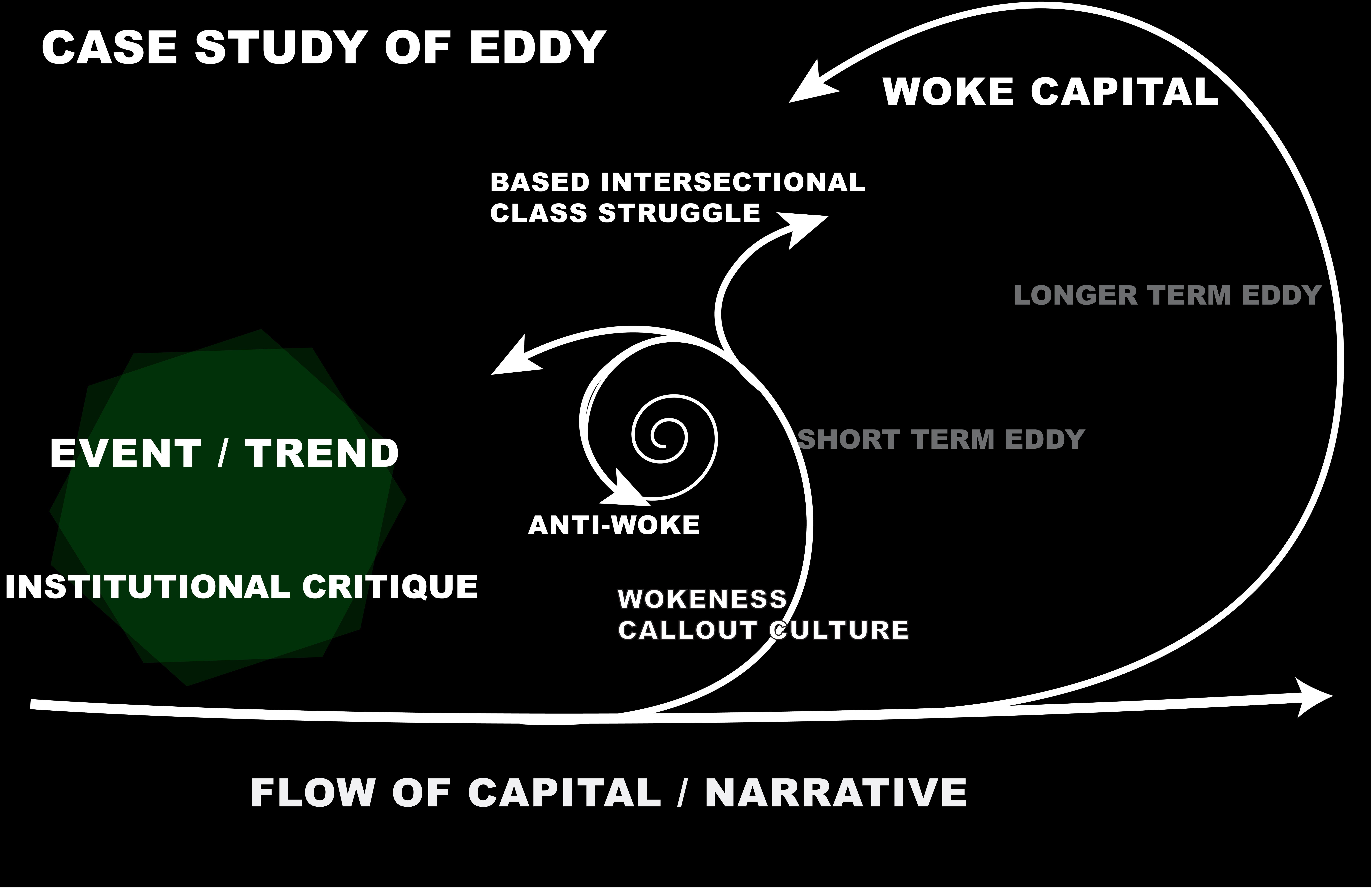 President Bill Clinton signed the “Telecommunications Art of 1996” deregulating the media industry. The bill deformed the information landscape: decimated public journalism while private outlets capitalized on heightened emotion. Cable News / True Crime / Nightly Outrage programming exploded. The influence of Neoliberal Think Tanks shrunk the Overton window to a keyhole and gave rise to the performative political-spectacle cottage industry known as “The Culture Wars.” The outcome was a merging of narrative and capital flow: the political economy of media institutions directly informed the framing and focus of their journalistic output. The eddy model is an attempt to formalize how narratives create collectivities online and in information space. Like a rock in a stream, an event forms an “eddy” in its wake. Pro/Anti stance strengthen counter-currents. New discourses are shaped by the event in the near and long term. At times the result of a short term eddy will be at odds with a long term development from the same event. Eddys form at increasing granularity as the Twitter UI encourages “Retweeting with Comment.”

Eg: Many political influencers have formed eddies of attention around themselves as a result of a political event. Jordan Peterson’s rose to prominence in 2016 by launching a transphobic attack on Canada Bill C-16. Peterson was able catalyze bigoted currents into a self-sustaining career after interest in Bill C-16 died out. 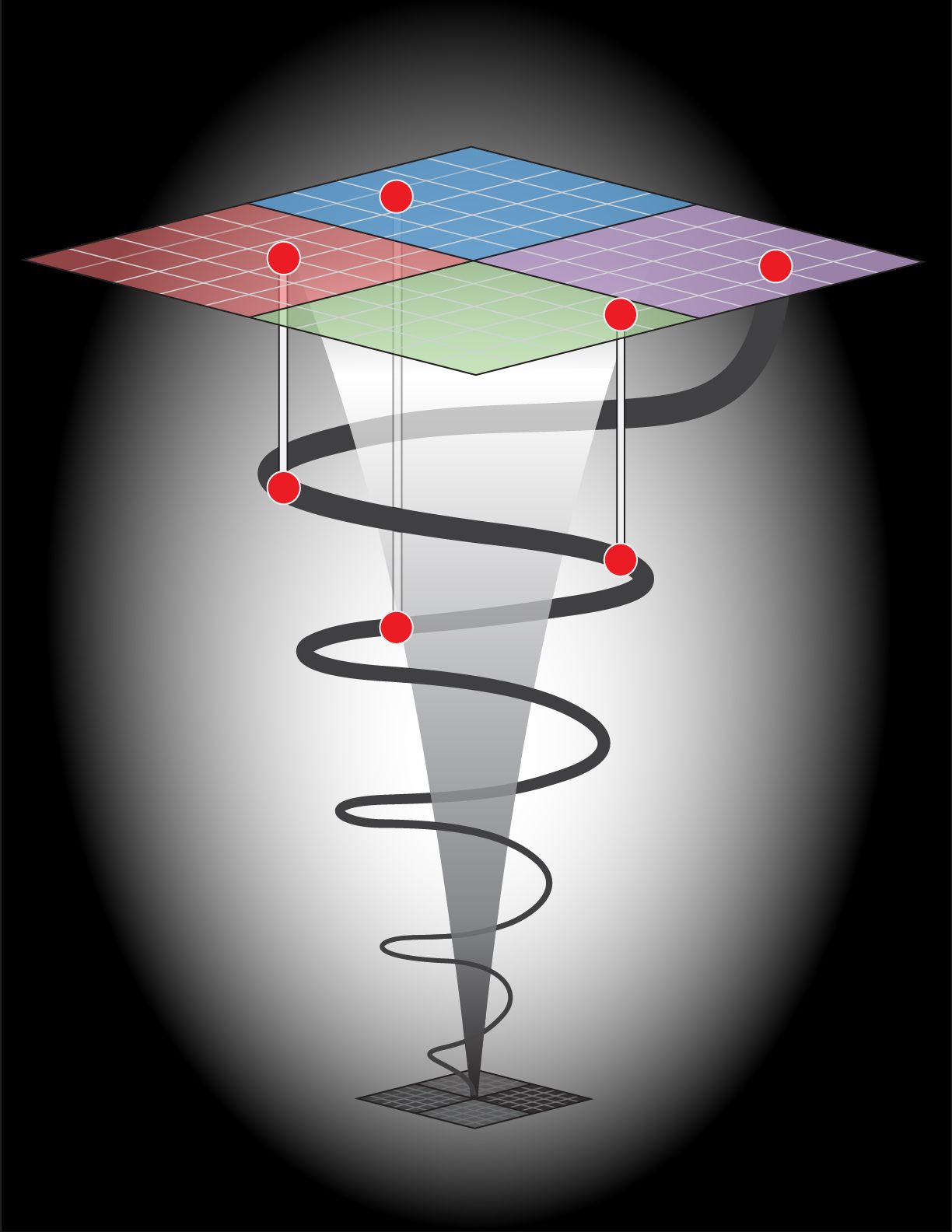 Seven decades of think tank crafted wedge issues have turned mainstream politics into a facade of vague grievances circling back into the power of the capitalist class. The rise of social media challenged this hegemony by exposing people to conflicting opinions. Running contrary to the “political silos” thesis of social media balkanization there is the now common refrain of “social media is spreading disinformation.” The problem here is that conspiracy theories and “disinformation” (as the technocrat frames it) are rich with counter-hegemonic narratives. Of course conspiracy theories often reinforce the beliefs of one’s political framework, but in addition, can complicate one’s understanding of history and current events. As one spirals deeper into conspiracy hoaxer narratives their core political beliefs are challenged and a distrust of the political establishment is sewn. In many ways, massive conspiracy theory communities are an expression of our wide-spread frustration with the political economy of contemporary capitalism.

As one falls down the conspiracy spiral they come into contact with people with wildly different political backgrounds. This fusion around an affinity interest again challenges the “social media creates political silos” theory. The Conspiracy Corkscrew illustrates how one moves around the political compass as one descends to the Dark Compass: a zone of complete political abdication: no longer interested in any proactive political project, instead focused on myth-building and logomachi. In this way, the corkscrew illustrates how conspiracy theory communities reframe the loss of political agency as a route for power rather than challenging this dynamic with a cogent political program.

This model was developed during the summer of 2020 when conflicting theories about an uptick in firework explosions in black neighborhoods went mainstream: it was a BLM action, a CIA / Police Psy-Op, a Foreign government destabilization play all at the same time. 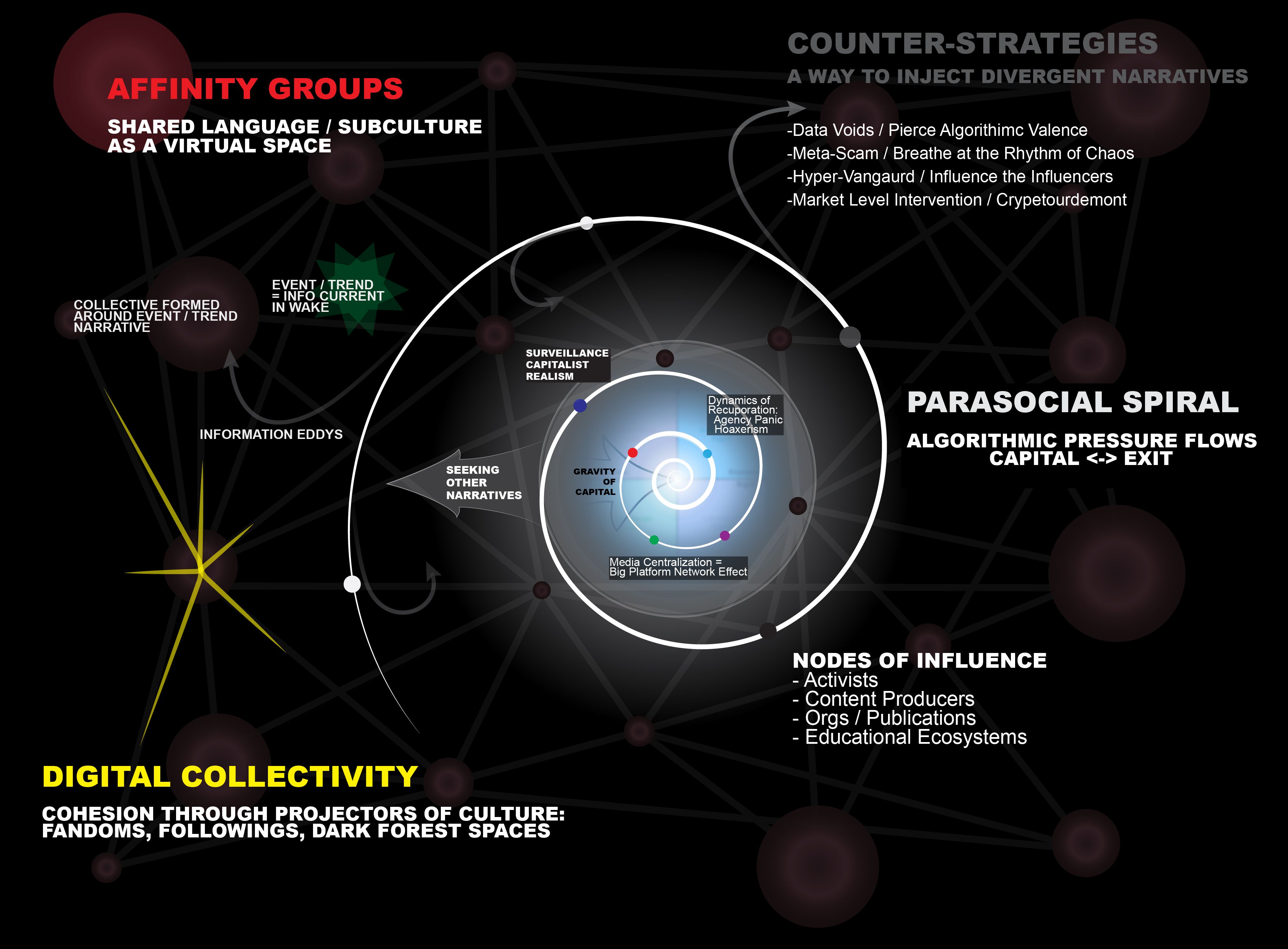 While the term Parasocial remains contested, I think it is useful to describe the unique experience of having your comment read out on a twitch stream or sharing commentary on a podcast. Rather than media’s traditional one-way or even two-way journey, Parasocial content creates a liminal space that we return to retrieve a sense of collectivity: the private chat, the running podcast in-jokes. As I wait for Joshua Citarella’s Twitch stream to start, I watch an on-platform ad made by Twitch: a streamer addresses this parasocial collectivity with “Hey Chat.” This new expression flattens and complexifies our relationship to broadcasting.

The Parasocial Spiral is an attempt to formalize a route to class collectivity in an extremely alienated contemporary context: there are no train cars of coal to block, no factories to sabotage, so we must find other routes to expressing collective political power. Many have proposed that collectivity is impossible with social media (there will be no socialism with social media) but perhaps there is another way. I believe that through the linking of disparate online creator community that a new hegemony or counter-hegemony will form and reroute the productive forces of capitalism towards new goals. I believe this because a survey of past media evolutions would suggest so, as well as faith in the power of narrative to overtake the world and reformulate it towards something new.