The Rise and Fall of the American Valkist Party

My exploration of fringe political spheres on Roblox (an ongoing project) was sparked by coming across a Roblox rally for the American Valkist Party on YouTube. This spun me, I was unsure of who this group were and stunned to see political organisation overlayed with nationalist marching music in a game I use to play in 2013 and hadn’t thought about since.

This was of course a LARP and based in a role play Roblox group, but I was still interested. In going down this rabbit-hole I came across a whole ecosystem and spectrum of political groups participating in a variety of activity. And whilst a right wing presence in Roblox is well documented I hadn’t expected a group with such a small following to have established such a clear identity with its own manifestos, marching songs and developed political philosophy. Here I detail their evolution as a party, where they come from, the highs, the lows, the memes, and the nature of their LARP looking at how it influenced the groups changing ideology. 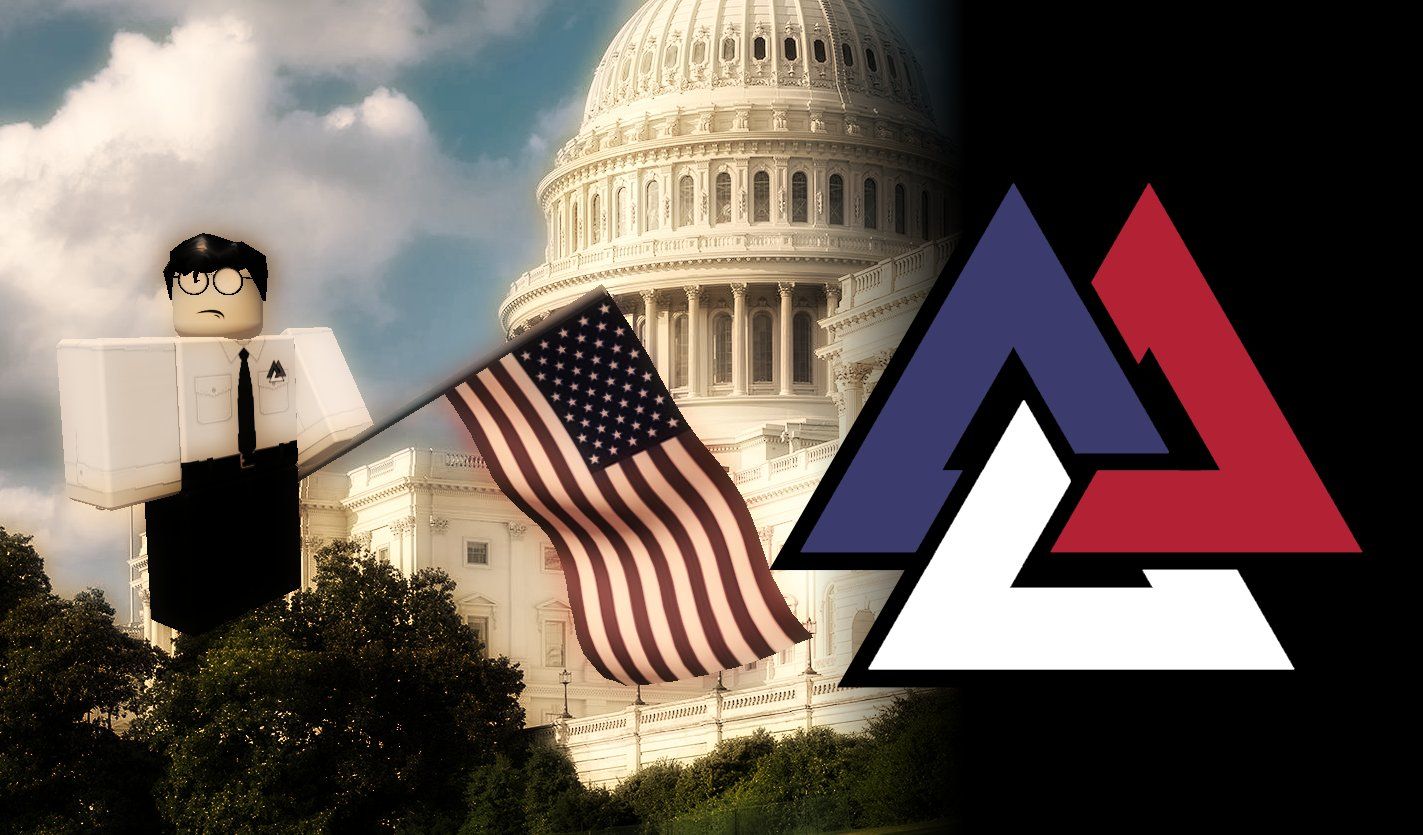 With Roblox being a massive service having around 43 million daily players these niche political corners are minute relative to other communities but harbour very keen participants who throw themselves into the groups. It’s important to understand that Roblox isn’t a game but instead a platform in which players and groups can create private or public games and experiences.

This is key in understanding what it offers e-deologies as it provides a virtual world to LARP and sandbox fringe, niche, or transgressive politics. The way Roblox groups are structed seems to favour these political factions as a group is able to display their allies and their enemies. Below, anti-fascist Roblox group The Fifth International lists their allies to be the Anarchist-Communist Combatants and the LGBT Anarchist Society whilst their enemies are The Right Arm Revolutionaries (a Roblox milita) and the Anarcho Capitalists. 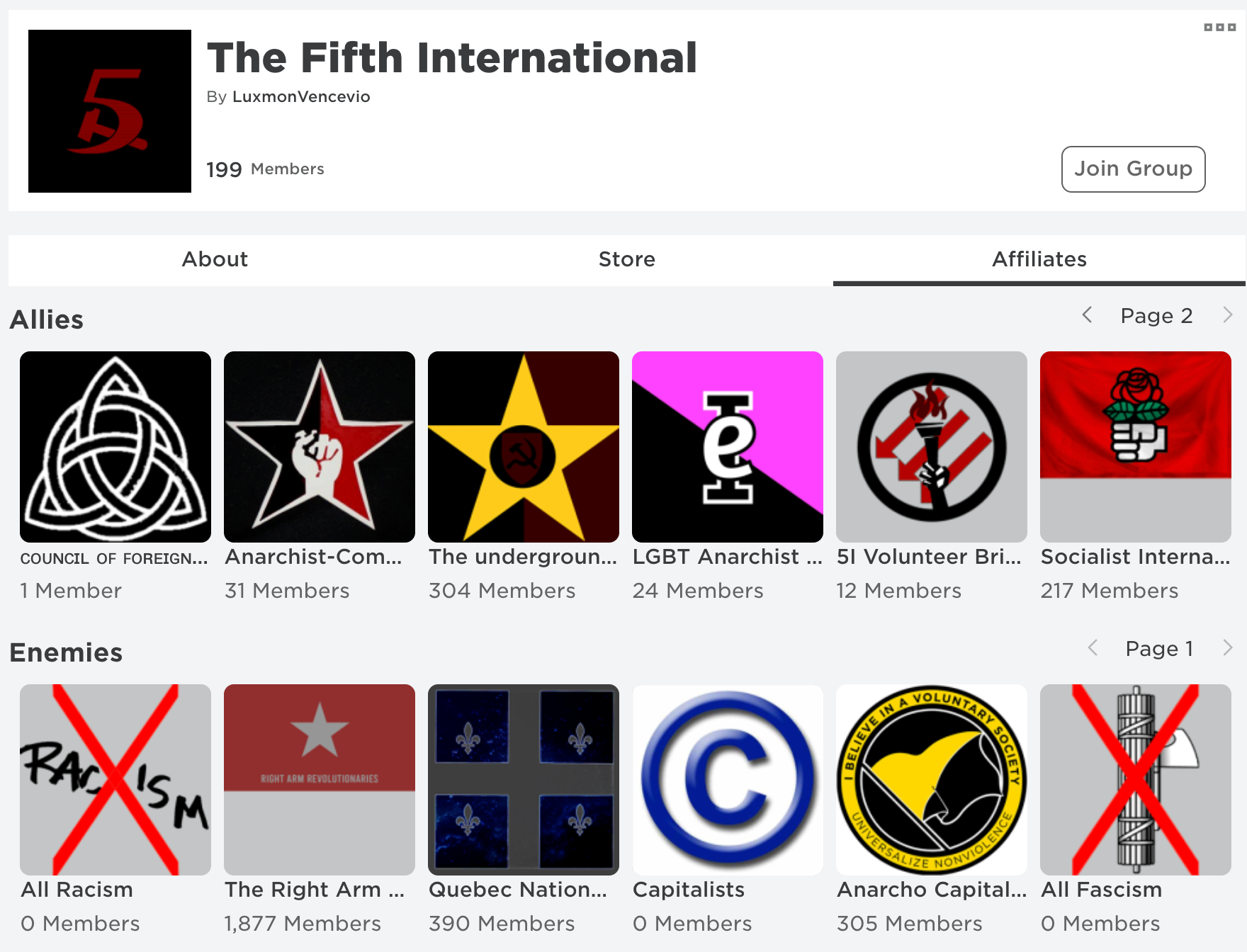 The world of Roblox political organisation may seem far removed from real life but as Josh points out in his Newmodels.io article Irony Politics and Gen-Z ‘If we can understand irony as masking our true intentions and recognize LARP as the process of world building essential to any radical movement, the Venn diagram of IRL and URL politics becomes a circle.’ The world building that goes into a LARP offers individuals escapism from political systems that alienate them and new political imaginations outside the Overton window. It allows for the imagining of new world and forms of politics, even if just for the duration one is logged in. 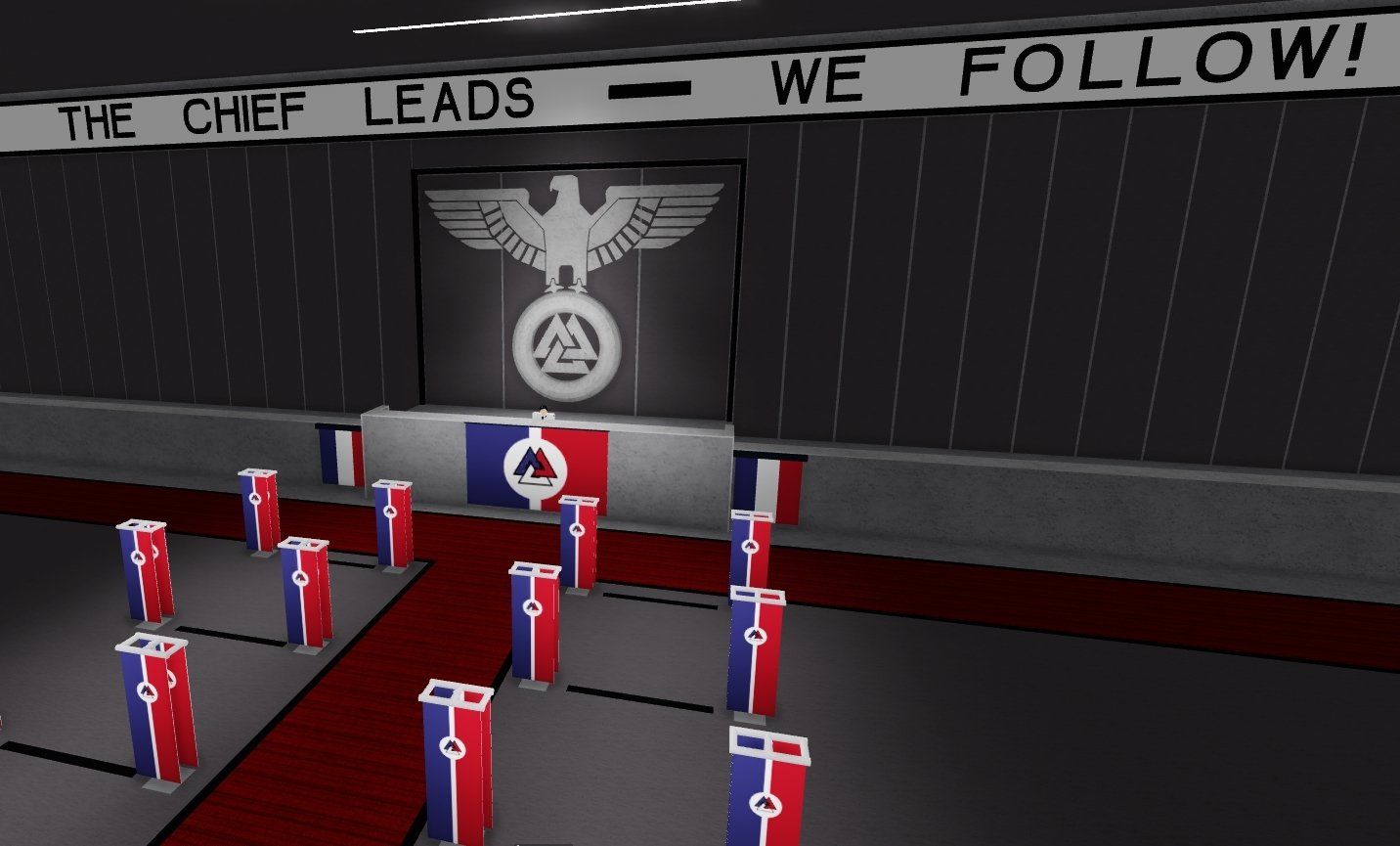 Image of a Valkist convention held in a private Roblox experience, found on the ‘Chiefs’ Twitter

The Valkist party name originated from an alternative history mod called the Fuhrerreich for the game Hearts of Iron IV, a strategy wargame that focuses on World War II. In this game the player may take control of any nation in 1939 and lead them to victory or defeat against other countries. The Fuherreich was an alt history mod that built on top of a pre-existing alt history mod, the Kaiserreich mod which is very well established. The Fuhrerreich mod creates an alternative history for what is already alternative history and is a speculative scenario where people of the Kaiserreich universe (where Germany won the first world war) contemplate what a German loss in the First World War might have led to. In this mod the Valkist beliefs are essentially ‘diet fascism’, instead of following a race science they were Cultural Nationalists who believed their culture was superior to other cultures.

After the American Valkist Party manifesto was posted to the Fuherreich subreddit, the reaction was shock and confusion at seeing a name familiar to them break the boundaries of their game. A debate ensued as to if this ideology that originated from the mod now ‘existed’ and if it was serious with many who previously dismissed it as a troll now having second thoughts after reading through the manifesto. To the Fuherreich players coming into contact with a manifesto expanding on an ideology local to their game blurred the lines between alternative history, role play and the real world.

The American Valkist Party was setup by the leader of the Northwest American State, a political group that participated in the same Roblox spaces as the Valkist party. I can find very little out about this group beyond a few memes made, but it came to an end after being mass reported by the Fifth International, a leftist anti-fascist Roblox group (who’s wiki is linked here). They also operated in nUSA, A political role play group on Roblox based on the real-world USA. It’s one of the largest groups on Roblox with around a quarter of a million players and where much of the Valkist activity took place. Following the banning a new party and a new ideology was promised to be on the way by the ex-leader.

From this the American Valkist Party was born with a mass of activity in mid 2020. A mix of symbols associated with paganism and nationalism went alongside the use of Wojak memes and fashwave to craft a clear identity for the party. This followed its politics which at this point appeared to be largely similar to the ideology presented in the Fuherreich mod. Debates were held in private groups and in the public nUSA server rallies and marches took place brandishing Valkist flags and uniform in an effort to recruit. 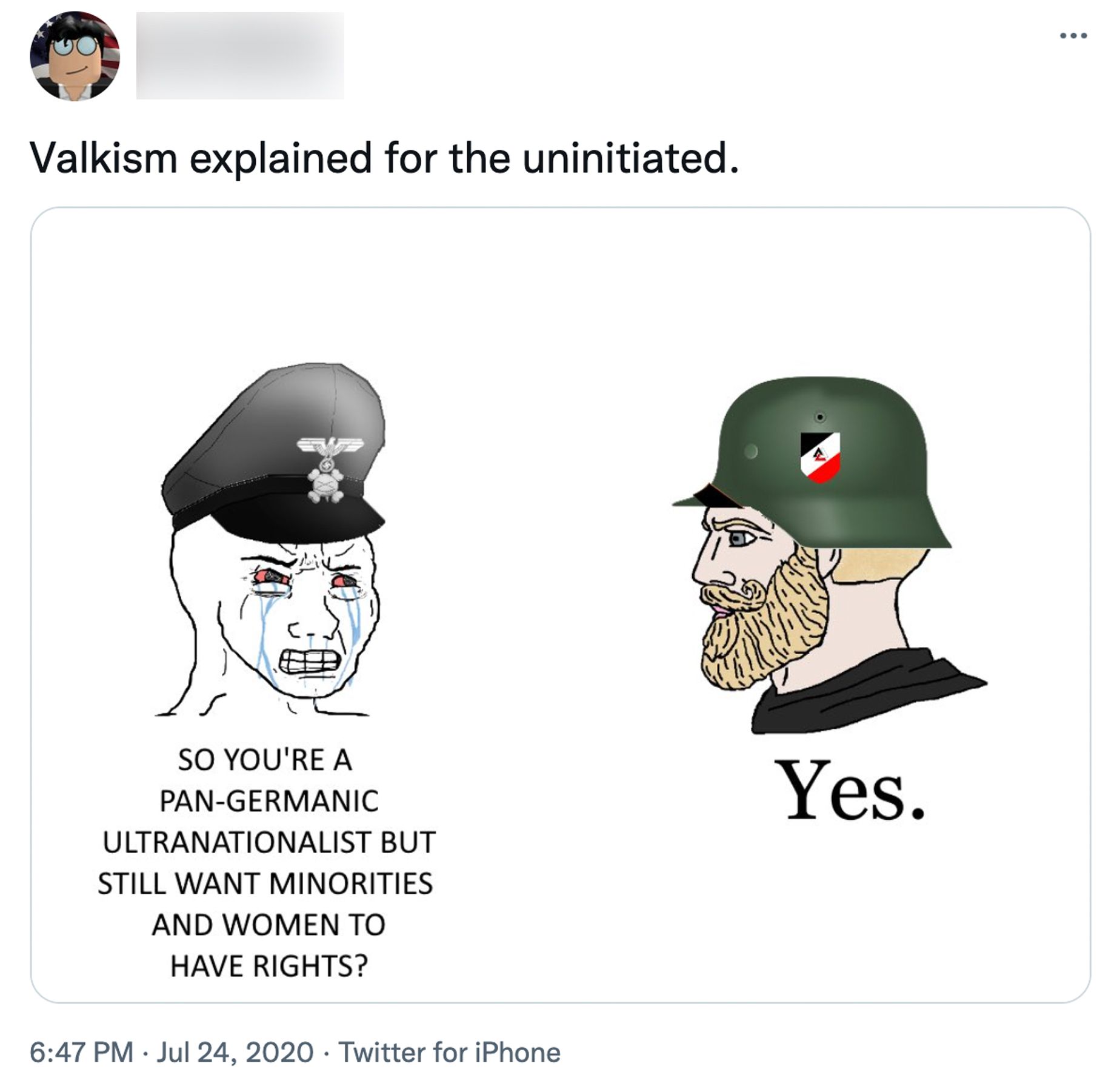 A meme explaining Valkism for the uninitiated, the crying Wojak is wearing Nazi insignia 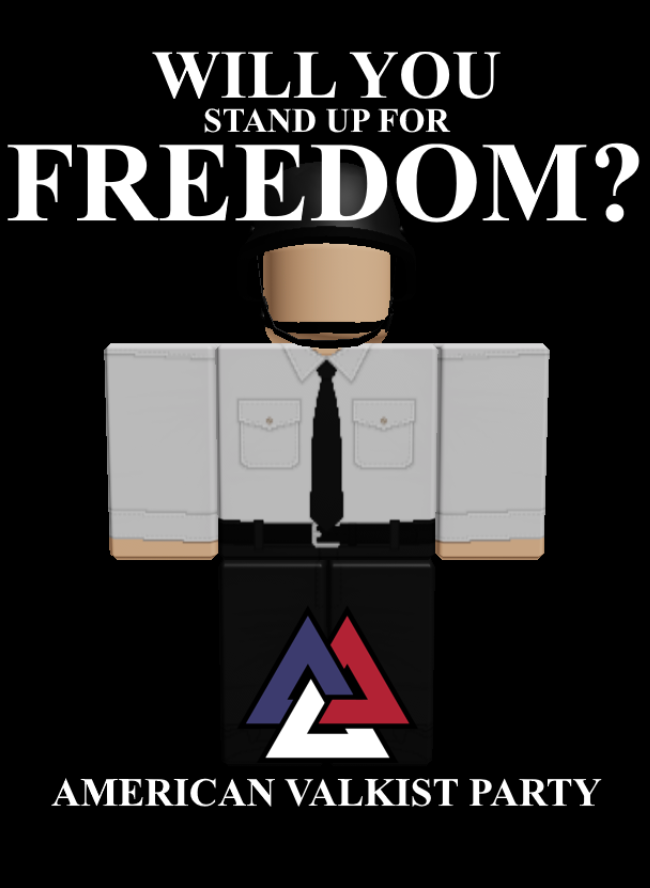 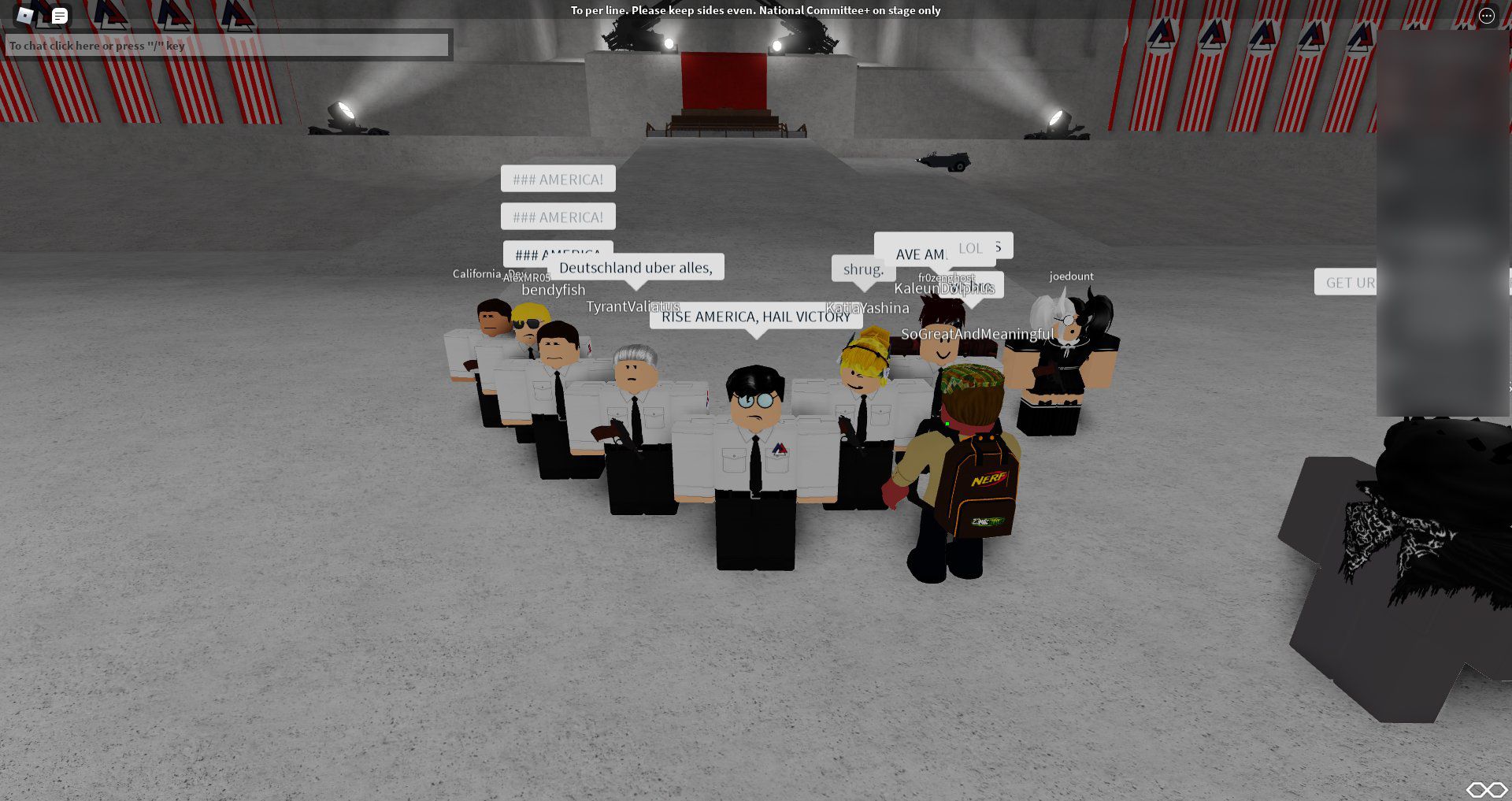 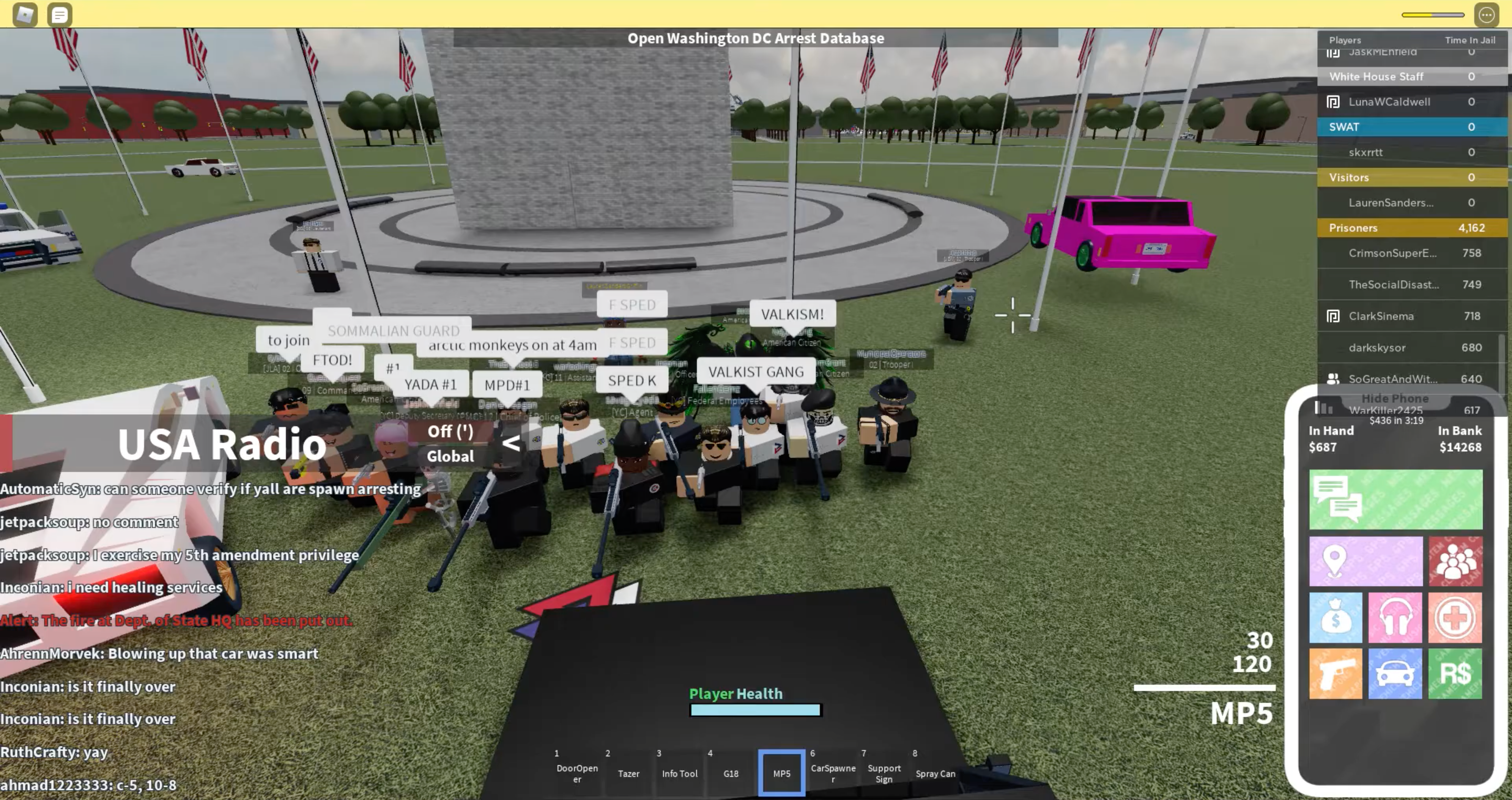 A Valkist party assembly in the public nUSA group, these images were sourced from the party leaders Twitter and Youtube

Having a back catalogue of music such as the American Valkist Marching Song, a variation of a nationalist marching song, helped to cement the groups identity and legitimacy. To many who came across it this seemed like a political organisation and ideology that went far beyond moded alternative history and Roblox with some YouTube comments having a similar reaction to the Fuherreich subreddit and being unsure as to how ‘real’ this group was.

The manifesto seen by the subreddit was also covered in a video by ‘Chief’, the leader of the Valkist party, reading through it. I won’t be linking this video as it’s now been removed from YouTube, but it outlined the politics of the Valkist Party at this point in time. The video was titled ‘What is Valkism? An In Depth Explanation’. 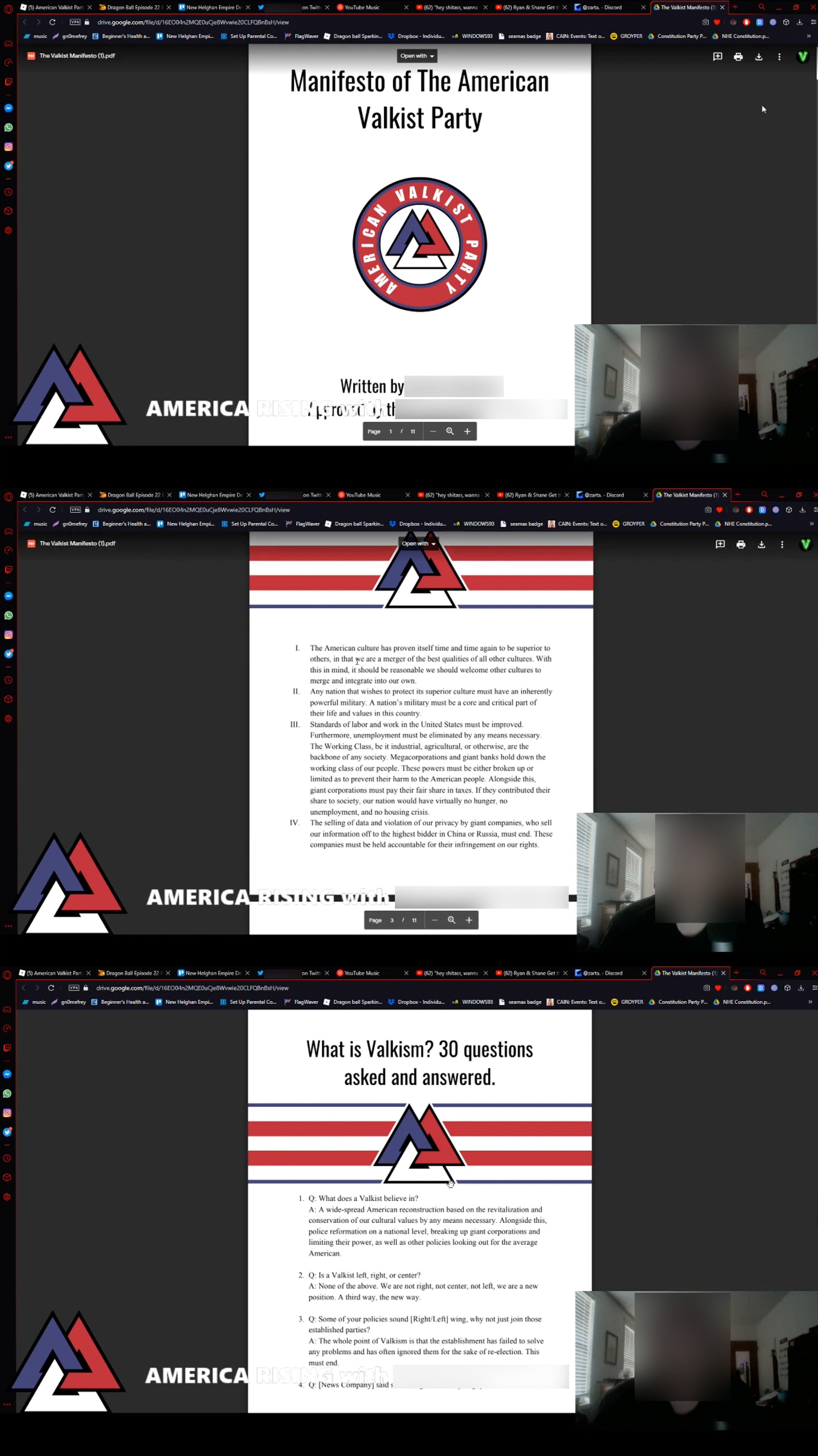 Screenshots from ‘What is Valkism? An In Depth Explanation’

In reading through this manifesto and discussing various points the barrier between what is role play and what applies to the real world is established, ‘This is a role play one’ or ‘This one is pretty RPish’ followed various points. Overall, this document is very much directed towards the role-playing world constructed in the nUSA group, and with this manifesto a platform was released with the Valkist party running for nUSA presidency. The political theory found here sits between the material and the virtual world with its input being defined by both in game role play and irl events. To readers unaware of its origins this blurred the line between reality and fiction just as the original alt history mod did. 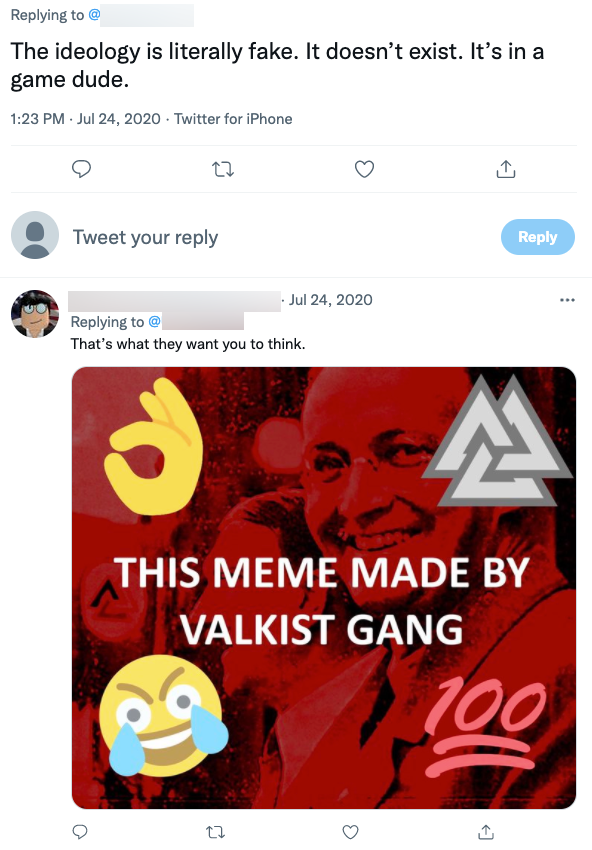 Screenshot from an old Valkist Party discord server I accessed

For reasons unknown the Valkist party were disqualified from the election and shortly after this a new manifesto was developed, a more rigorous document that outlined in far more depth the philosophy of the party. It was written and edited by two party members.

The new Manifesto, I came across this in a different disused Valkist discord server

The parties’ influences have evolved from citing Hamilton and George Washington to figures such as Giovanni Gentile (an Italian neo-Hegelian fascist politician), Oswald Mosley and Hegel himself. The document discusses the party’s philosophy, their identity, rights and responsibilities, freedom, the state, corporatism and lays at an action plan at the end with the intent to establish a Corporate State and nullify capitalism. Beyond this being intended for a Roblox group there is no mention of role play with even the action plan making no reference and being very applicable to the real world. 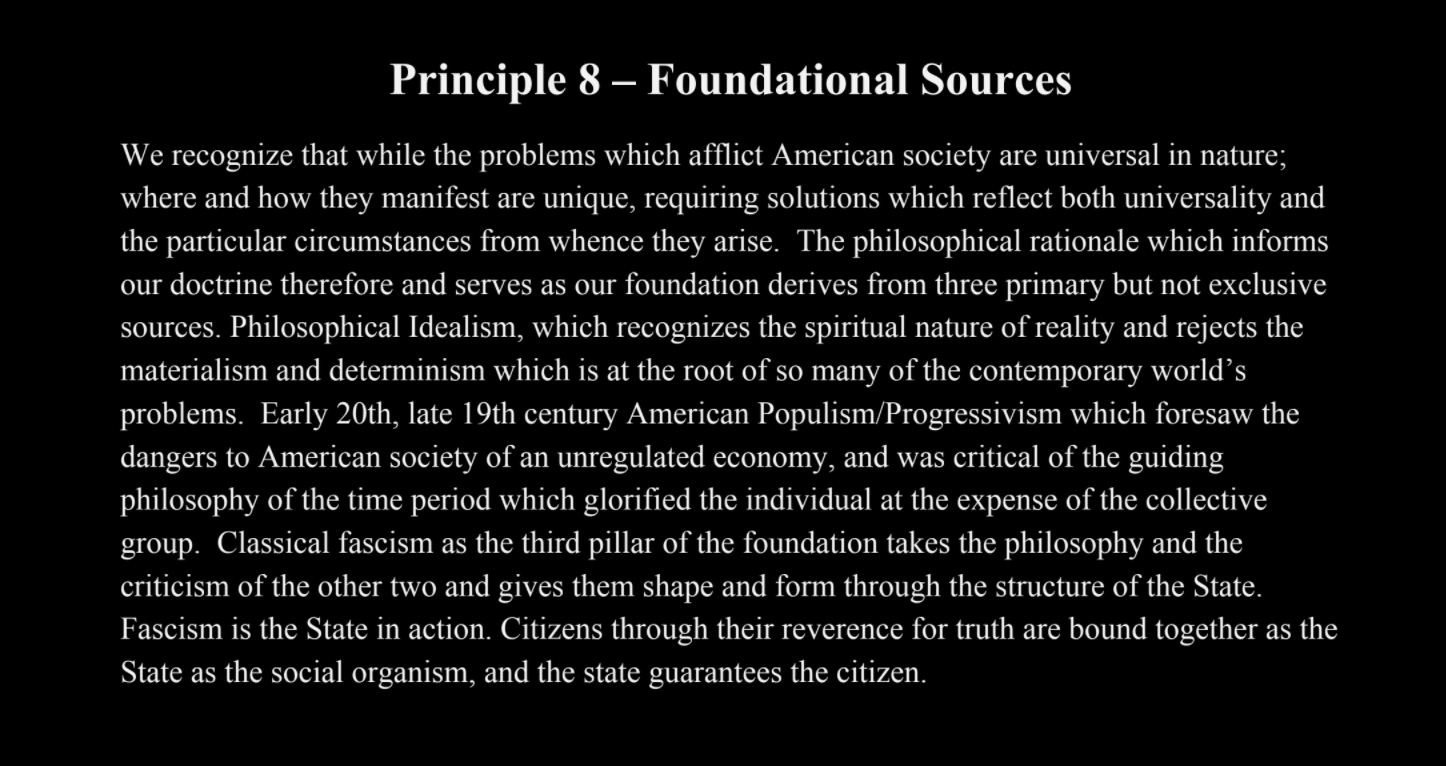 Another extract from the new Manifesto

It appears that through larping, the Valkist ideology has evolved to form new political positions in these role play circles and bought the members into new philosophies. Larping here is not just a passive process in which roles are acted or played but an active one where manifestos are written, and new ideological positions are developed for the individuals and group. Comparing this manifesto to the previous one where the line between the virtual and the material world was blurred but established it appears that there is now no distinction between the two.

This new outline of ideology bought with it a fresh aesthetic for the party that followed the dark coloured document with a ‘black shirt’ uniform and new songs such as the ‘Anthem Of The Blackshirts’. 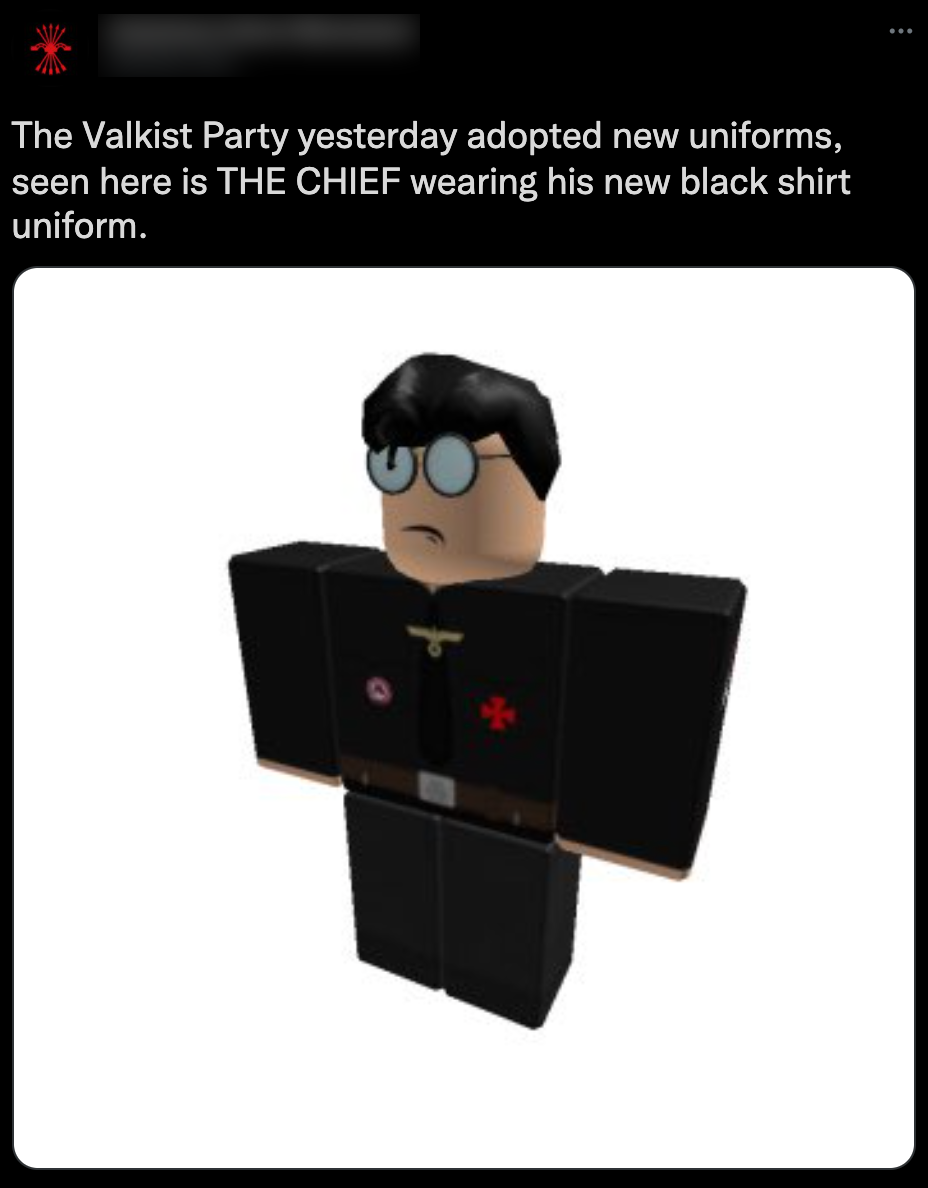 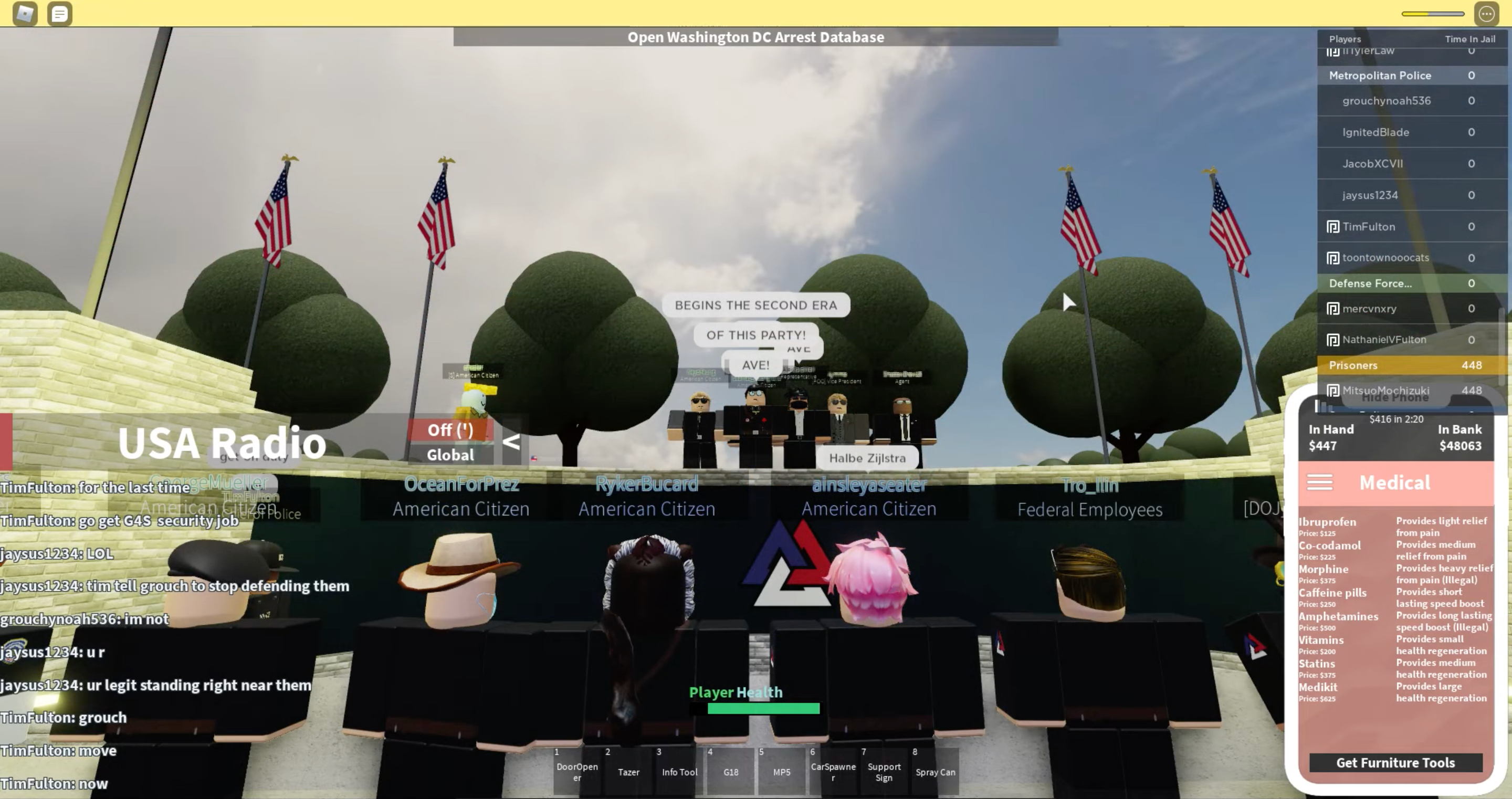 A speaker promises a ‘second era’ of the Valkist party, screenshot from YouTube 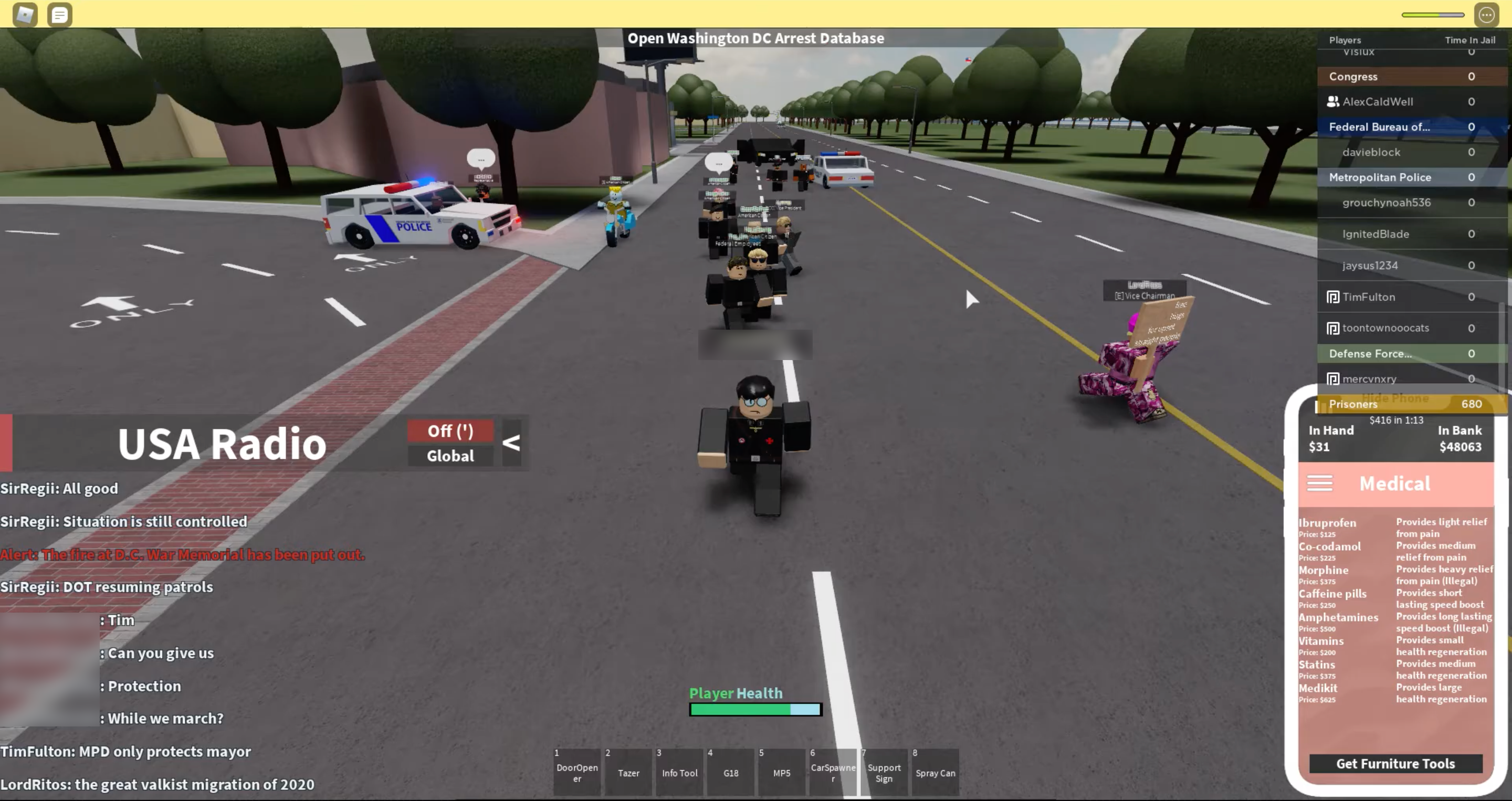 Marches in the nUSA group in the Valkist black uniform, screenshot from YouTube 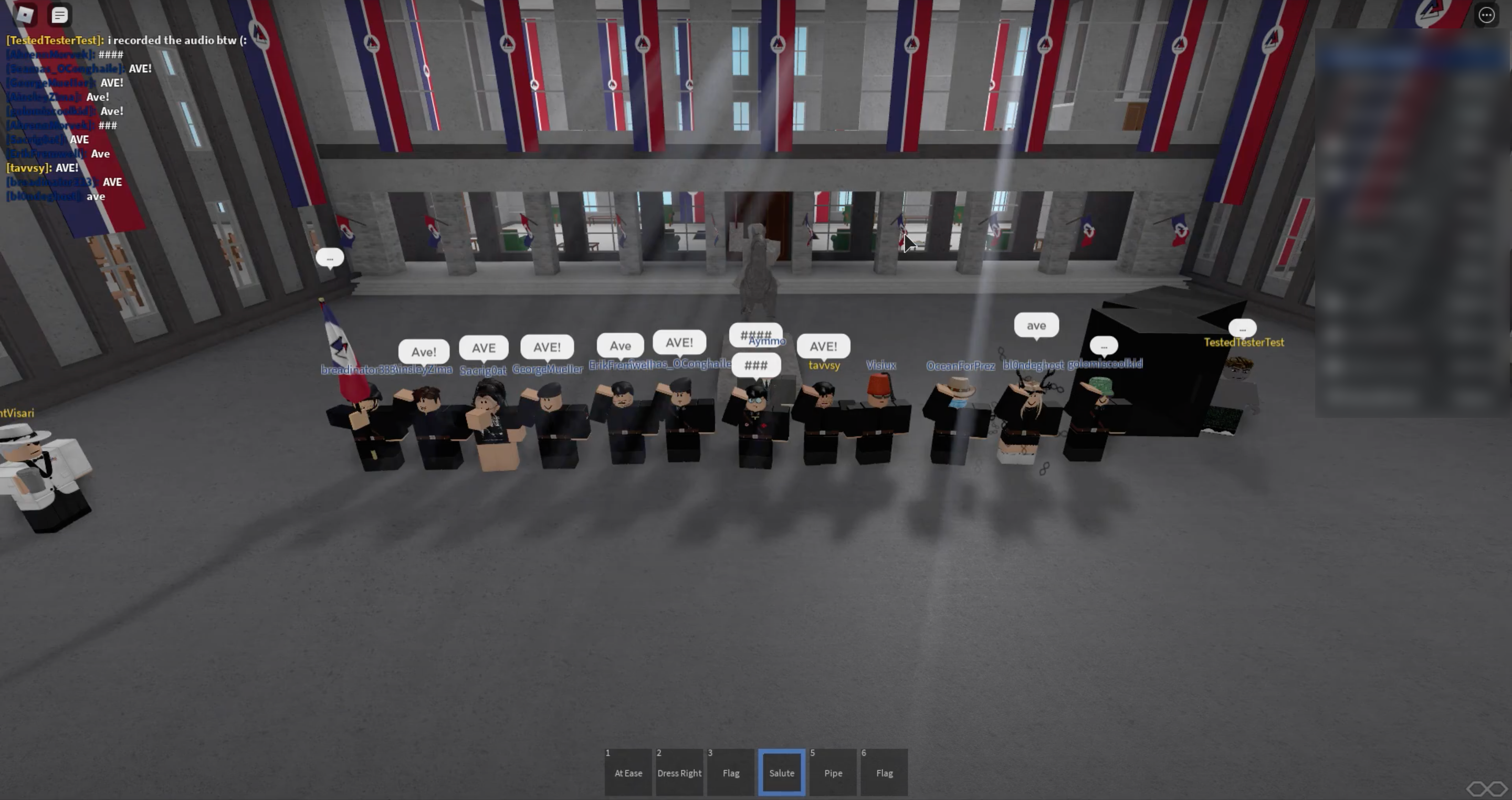 Below are my own screenshots taken whilst exploring the ‘American Valkist Party Headquarters’, a now disused server I managed to access. Areas appeared in disarray with Valkist banners strewn on the floor as if it had deteriorated due to its lack of use, in the building’s lobby there was a screenshot of members of the party assembling. 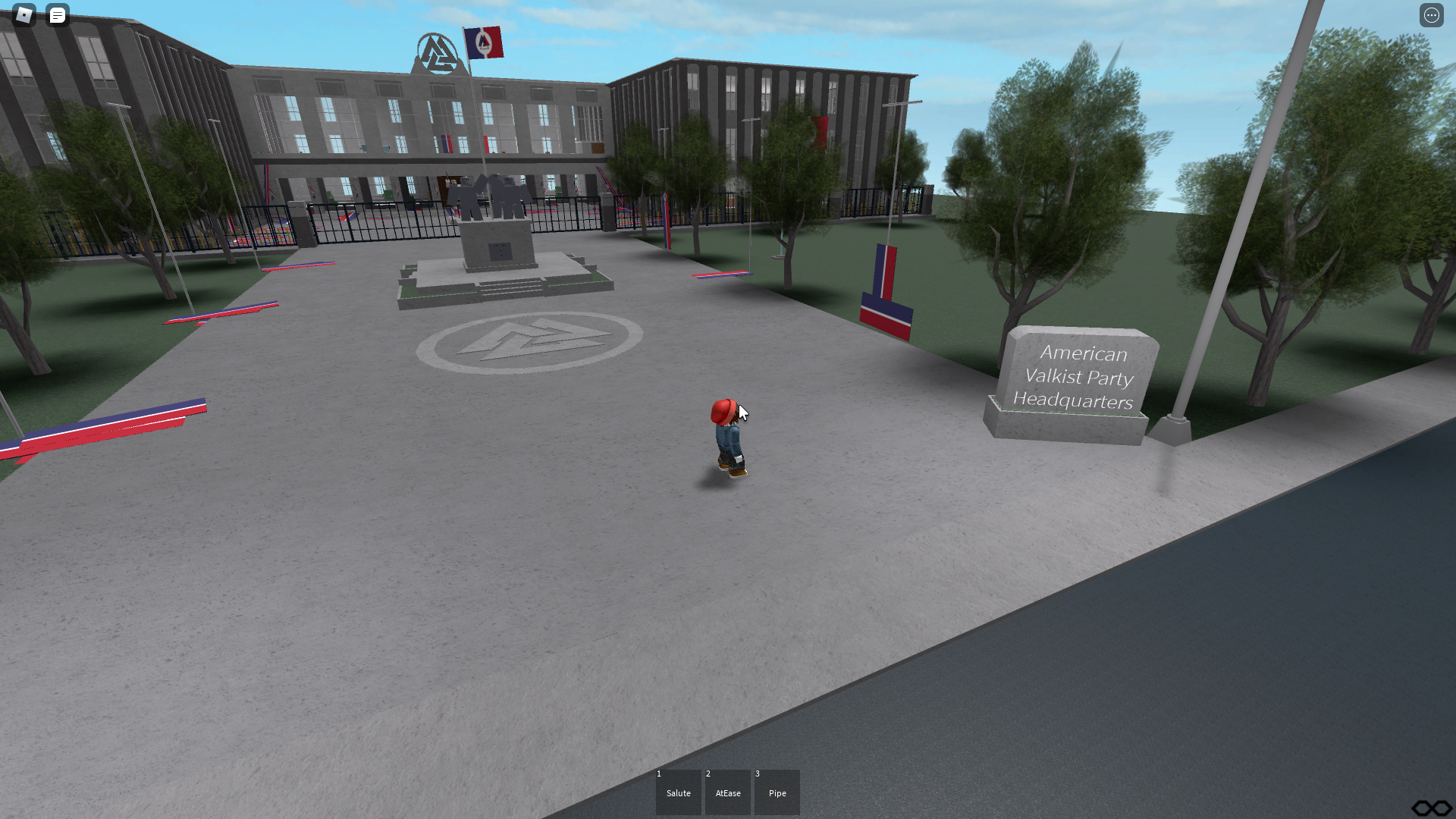 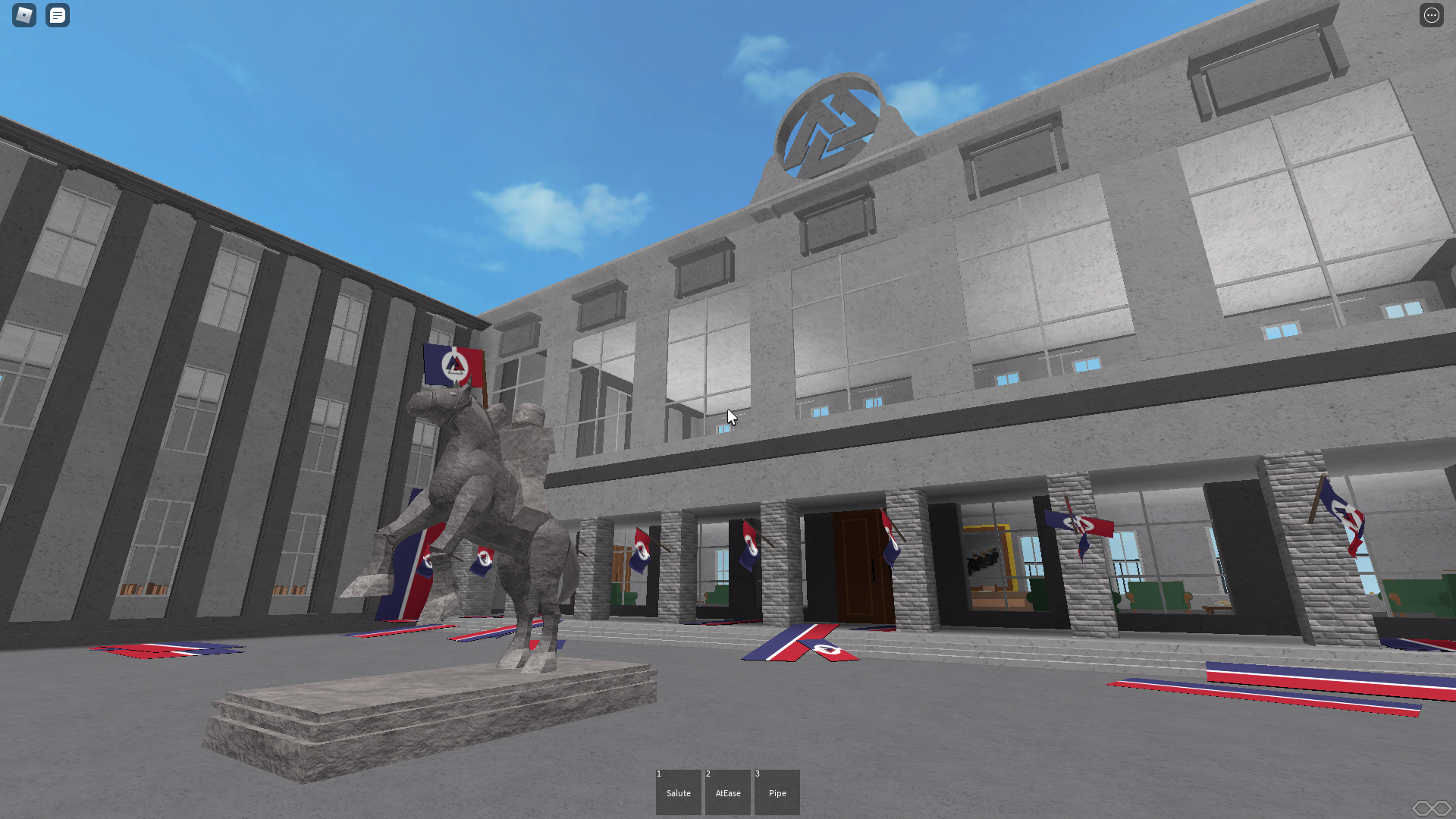 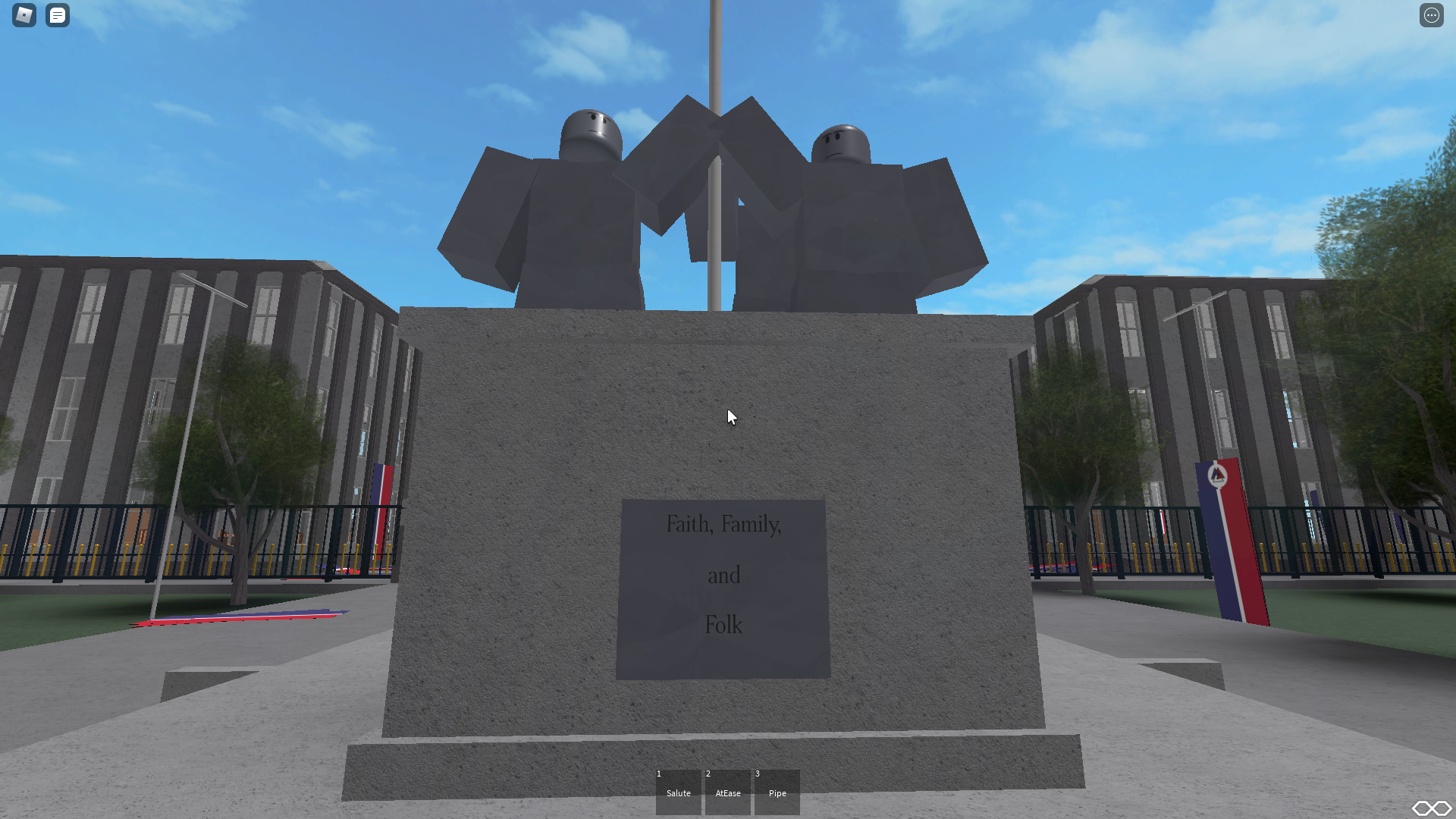 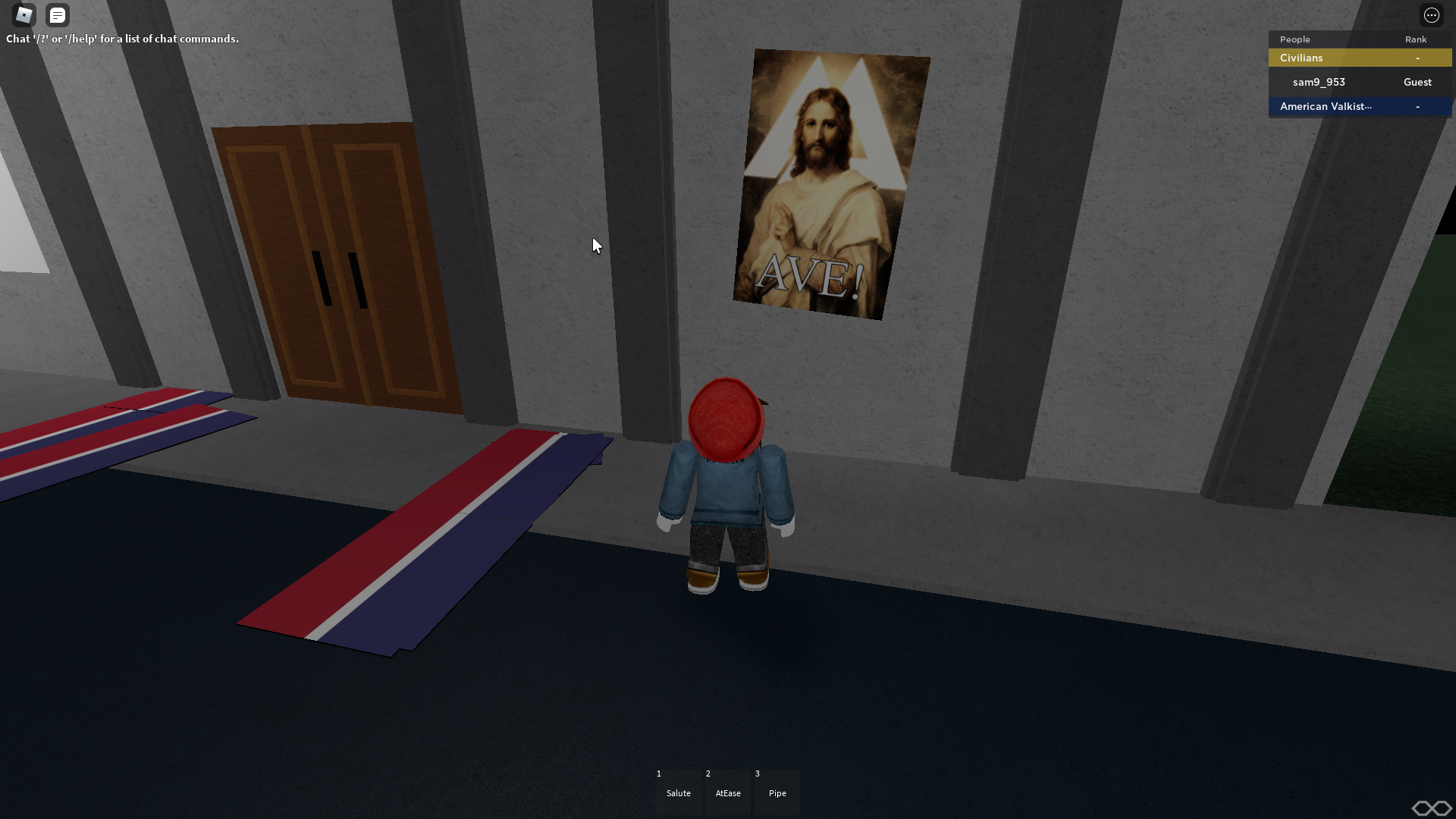 In the period following the new manifesto and aesthetic the Valkist party came under increasing pressure on all sides that threatened its existence. This started with attacks on the Valkist Discord and the leaders personal Discord from Patriot Imperium (a neo-nazi Roblox group that had previously not got on with the Valkist leader) resulting in these getting banned. At around the same time the group's Roblox page was also getting reported along with the accounts of members. This resulted in the leader getting banned and the Roblox group getting locked. Finally, the nUSA Discord server chose to ban the group leader effectively excluding them from the role play space. 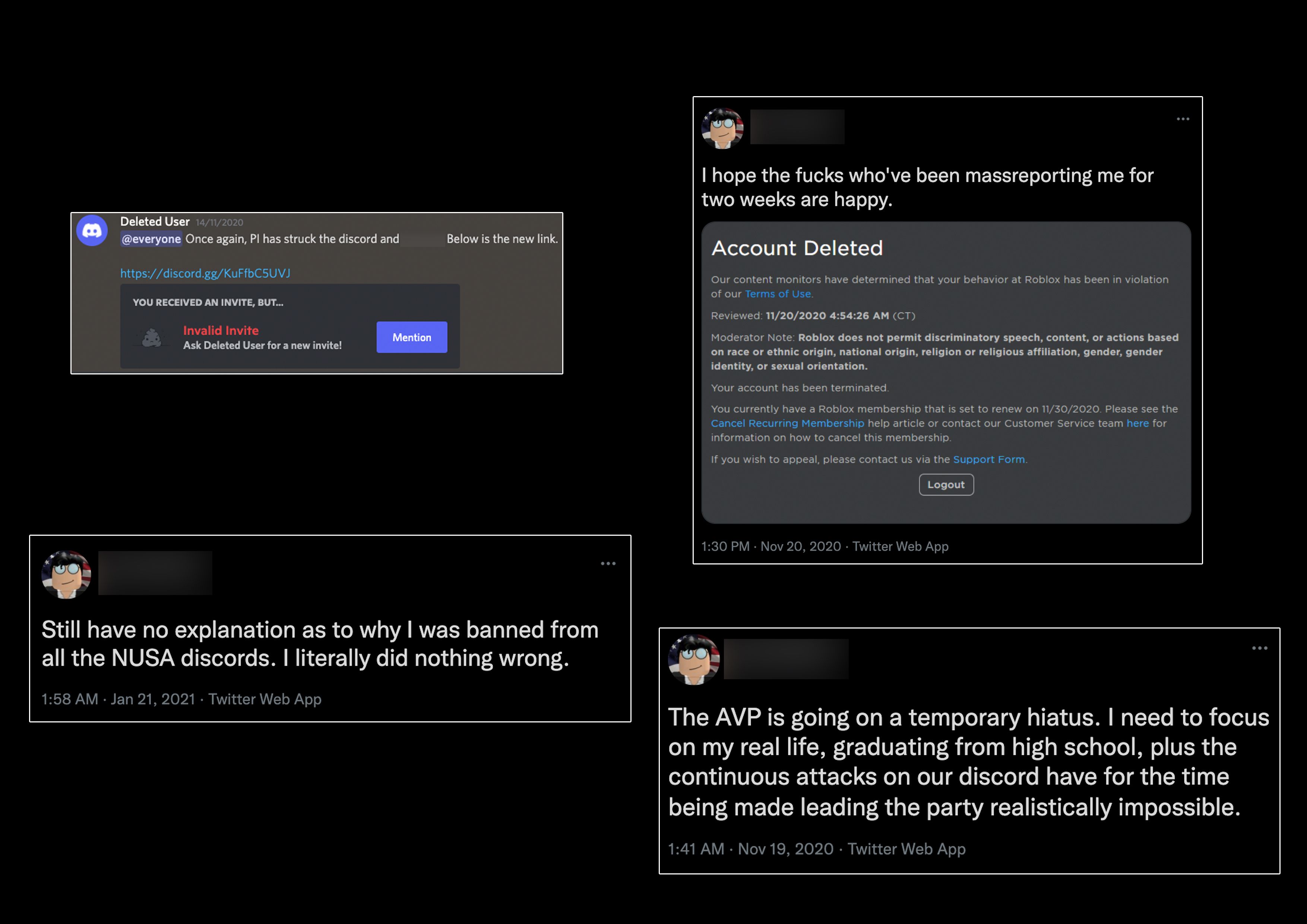 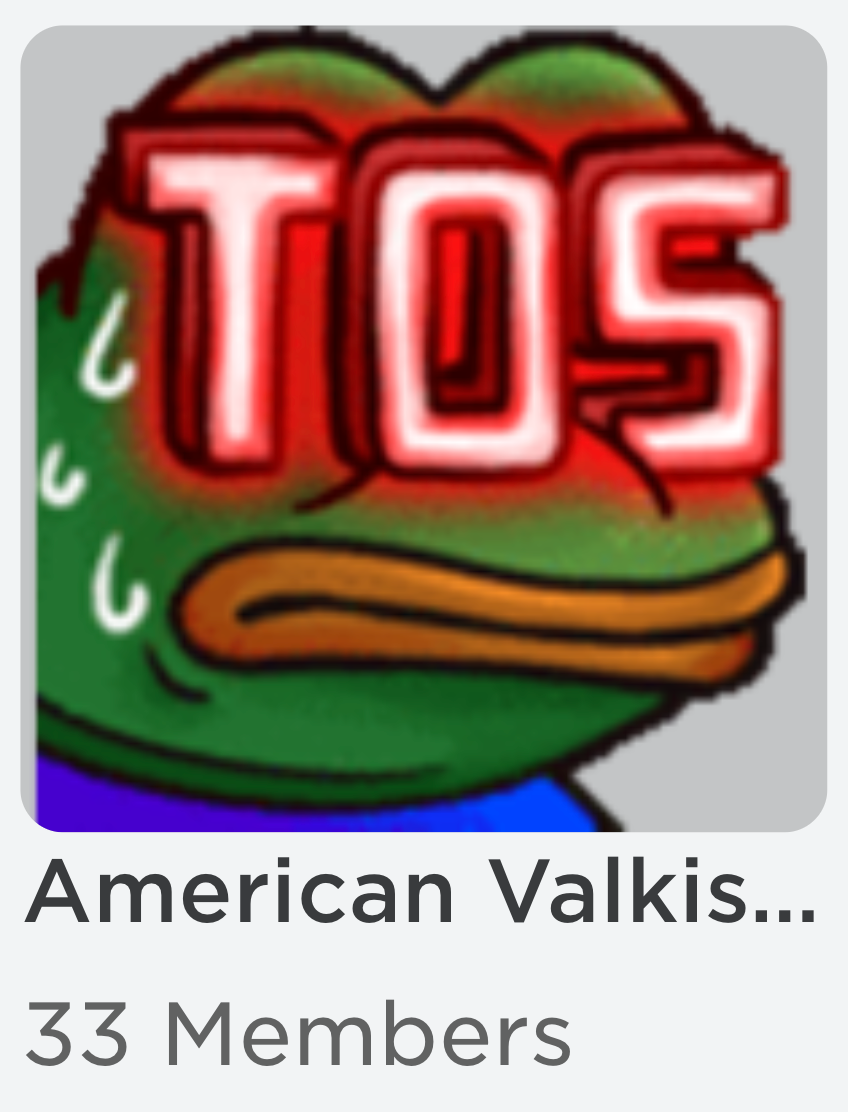 The Valkist party logo on the day it was terminated

Banning’s had happened before and were a common occurrence for these groups with many getting banned and then resurfacing under a different name whilst holding the same views. But it seemed the pressure from multiple angles hit the leader hard and left them with little other option but to put the group on hiatus and stop playing Roblox for the time being.

So what came after this? The leader took a break from Roblox saying goodbyes and that they wouldn’t be returning to nUSA. Two months later they formed a new party, the American Union Movement which appeared to follow Falangism, an authoritarian conservative ideology originating from Spanish fascist groups in the 1930s. This Roblox group was very short lived and had very little content put out for it. A return to nUSA was then promised on Twitter followed shortly by this tweet.

At the time of writing this discussion is currently being had about a new role play server to replace nUSA, which is seen by the Valkists as well as a large number of other players as having corrupt management. It’s uncertain what the future holds for this soon to come space or what part, if any, the Valkist party will play in it. But for Chief Directive No. 1 their future seems ambitious, currently their discord profile promises they’re actively trying to restore the Roman Empire, with the profile also showing them to have been playing Hearts of Iron IV for the last 3 hours.