The Tradition of Posting

The Tradition of Posting: Reactionary Social Media and Architectural Aesthetics

For those either generally familiar with the history of western art, or for the increasingly large number of the extremely online among us, one of the most notable internet-based social phenomena today is the rise of a new strain of reactionary social media accounts. While irony-poisoned reaction has been a cornerstone of internet discourse for decades, this new type of account eschews irony in favor of a sincere embrace of “tradition.” (See footnotes.)

Specifically, these accounts primarily post images of what they term “trad”, i.e. traditional, art and architecture, often from wildly diverse historical and geographical (though exclusively Western) contexts, to advocate for a decidedly vague R E T V R N (sic) to tradition. They tend to pair these images with a pithy observation, such as “beauty matters.” (See footnotes.) In addition to posting their own content, they frequently repost the content of other various artistic/cultural/historical-focused accounts. In this way they act as curators, bringing their followers a feed of image and text that conform to their ideas.

While the use of classical symbolism in service of a reactionary political agenda is nothing new, (cf. German and Italian fascism), the specific mode in which these social media accounts make use of this symbolism is worthy of discussion.

Perhaps the most striking aspect of these accounts is their use of anachronism and temporal flattening to juxtapose wildly different historical periods and styles. On the one hand, cultural artifacts from diverse historical periods are posted as equally relevant examples of what we have lost in our society’s supposed rejection of traditional values. On the other, these accounts frequently employ a technique of anachronistic juxtaposition, in which a “good” traditional cultural artifact will be placed alongside a “bad” modernist/contemporary cultural artifact to illustrate the need to R E T V R N.

While the posters generally equate the past with good and the present with bad, this identification is seriously called into question by a historical style like brutalism. Brutalism is now itself a historical aesthetic that has been largely rejected by contemporary architectural practice. However, this does not stop these accounts from using it as a punching bag, treating it as perhaps the purest distillation of the sins of modernism. It is therefore not simply an object’s “pastness” or age-value (See footnotes.) that gives these cultural artifacts meaning for the traditionalists, but an adherence to the aesthetic values that they espouse.

Given my suspicion that much of what is driving these accounts is pure nostalgia, I wonder how they would feel about brutalist architecture if it were today discovered beneath the sands of Egypt. Would the patina of thousands of years be enough to rehabilitate its supposed disdain for tradition?

The aesthetics espoused by these accounts are by no means clear. They do not put forward anything close to what might be termed a “manifesto”, but offer only vague clues as to their ideology. This vagueness is perhaps intended to hide a repugnant political ideology, either from the platforms that hold the power to shut these accounts down, or perhaps also from the users, who may find themselves sympathetic to the culturally conservative content as long as they are unaware of the reactionary beliefs that drive these posters.

For a more coherent critique of post-modern architecture, we turn to the text that first identified postmodernism per se, “Postmodernism, or The Cultural Logic of Late Capitalism” by Fredric Jameson. Describing the mirrored glass towers that dominate this style, Jameson writes:

“This great sheet of windows, with its gravity-defying two-dimensionality, momentarily transforms the solid ground on which we climb into the contents of a stereopticon, pasteboard shapes profiling themselves here and there around us. From all sides, the visual effect is the same: as fateful as the great monolith in Kubrick’s 2001 which confronts its viewers like an enigmatic destiny, a call to evolutionary mutation. If this new multinational downtown…effectively abolished the older ruined city fabric which it violently replaced, cannot something similar be said about the way in which this strange new surface in its own peremptory way renders our older systems of perception of the city somehow archaic and aimless, without offering another in their place?”

For Jameson, a key element of post-modern architecture is its two-dimensionality; its insistence on a surface that bears little or no relation to the interior space. What is more, this two-dimensionality has shattered our conception of the city as such. All of us who navigate the streets beneath these looming 2D glass towers, with an understanding of the city that relies on a much older notion of place, are challenged by these structures. As Jameson points out, this elicits a reaction on the part of the viewer. It is this reaction that the “trad” accounts appeal to. In this quote, then, Jameson goes a long way towards revealing the source for the “trad” accounts’ recent popularity. 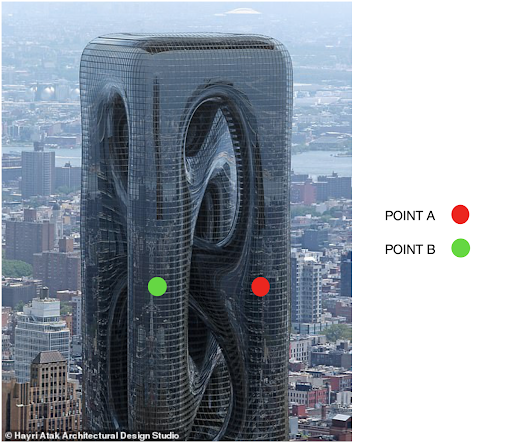 A particularly jarring example of this sort of architecture may be observed in the proposal for a new building in Manhattan’s financial district, put forward by the Turkish firm Hayri Atak Architectural Design Studio.

Imagine that your office is located at point A, and you have a meeting to attend at point B in five minutes. How do you even begin to navigate the twisting forms of this colossal structure? This building has been designed to primarily emphasize its superficial appearance, with little to no consideration of the relationship between this exterior and its interior space. This lack of correspondence or dialogue between interior and exterior, between form and function seems to be at the heart of what “trad” social media accounts disdain in contemporary aesthetics. 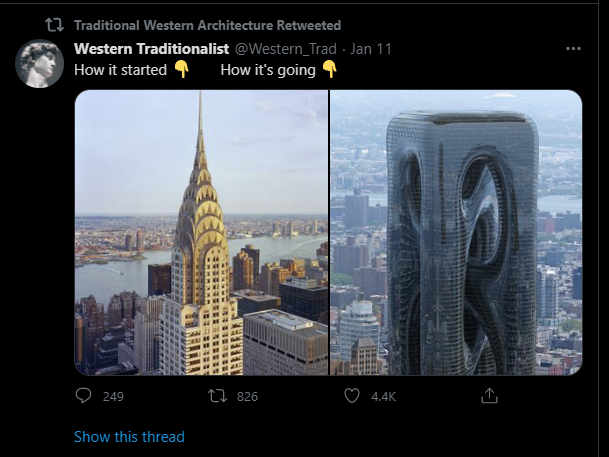 This building was recently posted alongside the Chrysler building by @Western_Trad, employing the juxtaposition strategy outlined above. The Chrysler building, by its very definition as a skyscraper, pushed the boundaries of building and architectural practice when it was finished in 1930. However, with its historicizing gargoyles and broad correspondence between exterior and interior space, it contrasts sharply with the proposed new work. 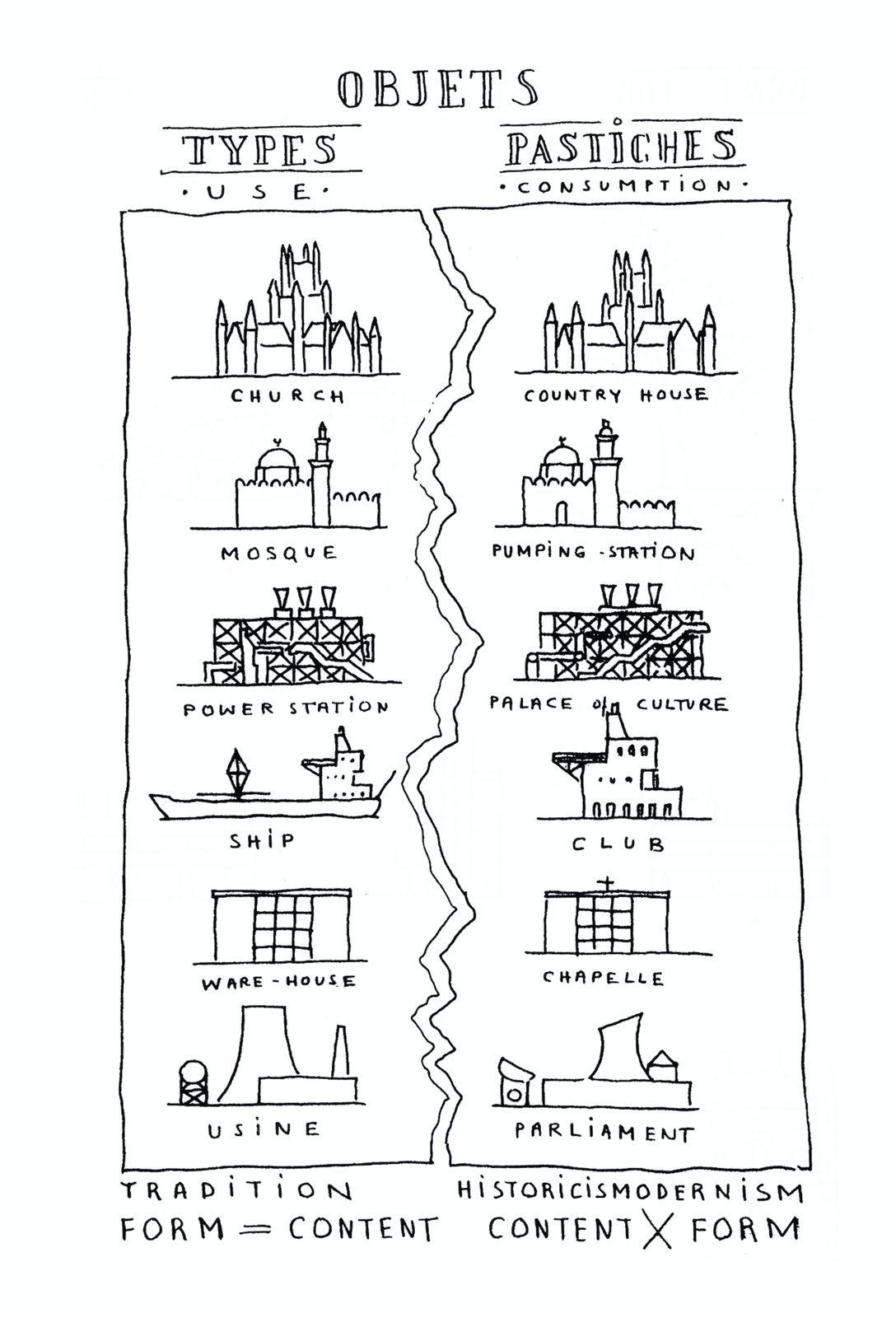 The Bauhaus school of architecture and those influenced by them demonstrated that form and function may be separated, that the alignment of these two is arbitrary, and by no means necessary. While this was an important development in the history of architectural theory, there is today increasingly a capricious disregard for the idea that form and function should ever correspond. The above diagram, taken from a work by the architect and author Leon Krier, further distinguishes this phenomenon of the divorce of form and function with his identification of “Types” and “Pastiches.”

American Developers (BROOKLYN) put up apartment buildings that resemble factories in order to claim for themselves some of the stylistic panache held by formerly industrial spaces, like those in Soho, that were reappropriated by artists and bohemians in the 1970s and ‘80s.

Yet the aesthetically interesting aspect of these spaces comes precisely from their historical transformation, from an ad hoc adaptation by a counter-cultural élite. This history is completely absent from the newly made industrialized residential spaces of Brooklyn and beyond. They are pure pastiche, which over time are no longer recognized as such.

While many of these buildings are built new, it should be noted that formerly industrial spaces continue to be redeveloped today (see above right). The interiors are gutted, but the antique facades are left up, as they are prized for their age-value. It is true that they contain traces of a “real” past, but these buildings are nonetheless pastiches. Indeed, they are perhaps the purest form of pastiche. Blank, sanitized residential interiors cloaked in verifiable relics of Fordist social relations. This fragment of history is subsequently fetishized by the developers, who turn it into a selling point. For this purpose, the Glassworks development’s website dedicates a section to the building’s past, noting that “Glassworks Bushwick boasts a rich history.”

What happens when we are trained to desire residence in industrial spaces? Work From Home as a product of Covid points to a rather dystopic image. Brooklynites with “bullshit jobs” (RIP David Graeber) spending most of their waking hours on their laptops, in apartment buildings made to look like factories. These new factories, however, do not contain large open spaces as did their predecessors. They do not allow for the intercourse of fellow workers, a primary driver of workplace organization. Rather, the closed cells of individual apartments become an archipelago of labor, with residents virtually integrated into the vertical hierarchies of their employers.

These new factories of workers-from-home also provide new opportunities for surveillance, just as did those discussed by Foucault in Discipline and Punish, but this virtual surveillance is extended by the collapse of the distinction between your workplace and your home. You now live in your workplace. You do not work from home, you live in your office. How fitting, then, that your apartment building’s facade resemble the factories of America’s industrial past. If you can afford it, maybe you can move to a building where the facade is literally a piece of that past.

A cruel joke. One of many to be found in the neoliberal hellscape of 21st c. America.

In a sense, the “trad” accounts are right. Our contemporary architectural aesthetics are indeed flawed, but ought we instead blindly re-embrace classical aesthetics in an attempt to reclaim something that we lost long ago? This reactionary fantasy of return is impossible. Any action carried out in the present will inevitably bear the marks of its historical context.

A further problem with the “trad” accounts may be identified by examining another aspect of Krier’s diagram. Krier stresses that tradition equates to a relationship between form and function, and is expressed architecturally as a “type” which is opposed sharply to the “pastiche.” This “pastiche” may appear, as in the case of Krier’s country house, in the form of a medieval church. This “trad” form would be appealing to the social media accounts, even though as a pastiche it would represent just as complete a divorce of form and function as does the Hayri Atak proposal.

Though the “trad” accounts have hit on some aspects of contemporary building practice that are worthy of critique, and appeal to an almost universally negative reaction to postmodern architecture, as outlined by Jameson, they nevertheless fail to articulate a clear way forward, instead choosing to wallow in nostalgia. Yet we may learn from their shallow critique as we continue to imagine a more successful left architectural future. (See footnotes.)

1. @Trad_West_Arch, @trad_revival, @Arch_Revival_, @wisdom_trad, @trad_beauty, et al. These accounts are interconnected by mutual retweeting and Twitter’s suggestion algorithm. While the focus of this discussion will concern architecture, there are accounts within this network that focus more on traditional art, or traditional family values (i.e. pictures of white mothers and children.)

3. for a thorough explanation of the term, see Alois Riegl, The Modern Cult of Monuments, 1903.

4. This is by no means a manifesto, however, there exists today a widely felt desire for an architectural practice that integrates form and function, and that enters into a dialogue with past forms without robotically reproducing the classical orders. The built environment should fundamentally reflect the needs and desires of those who dwell within it. While an in depth discussion of a way forward lies beyond the scope of this essay, suffice to say that there are those today who recognize these difficulties and are working to change the way we interact with the spaces we inhabit. c.f Gogineni, Bina, and Kyle Nichols. “Anthropocene/Anthroposcene: Integrating Temporal and Spatial Aspects of Human-Planetary Interaction toward Ethical Adaptation.” Critical Inquiry 47, no. 2 (2021); Krier, Leon, The Architecture of Community (2009).