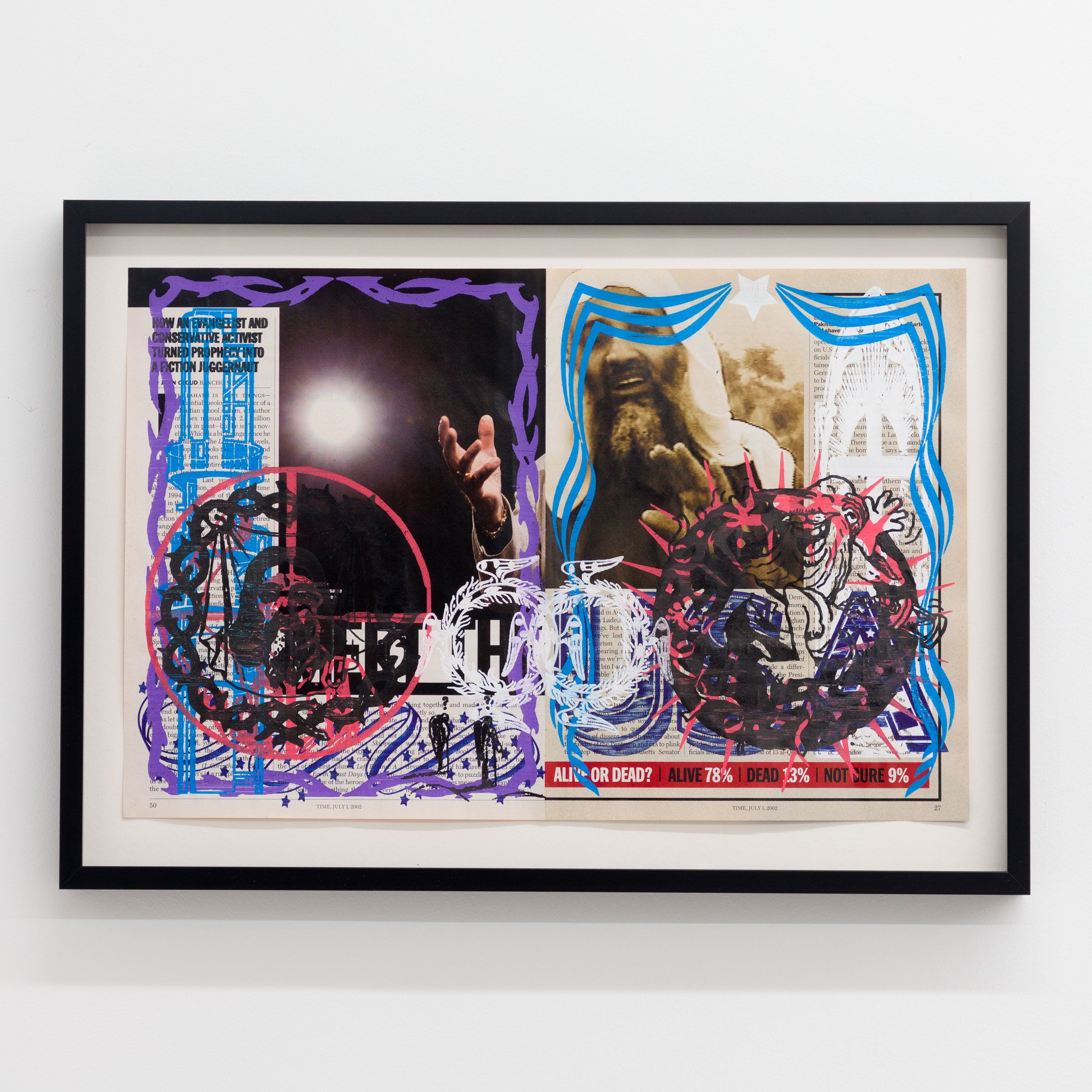 TIME is a body of work consisting of 27 pen plotter prints on the page spreads of old issues of Time magazine from the waning years of the 20th century, spanning from 1979 to just after 9/11. Due to the printing method of the original magazines, the opposing pages of the uncollated spreads are nonconsecutive, creating chance juxtapositions of images and text. In one spread, a cropped photo of the burning Branch Davidian compound at Waco runs headlong into a survey of 20th century sculpture at the Guggenheim. The most recently published spread in the series (see above) features a split image of Tim LaHaye, the evangelical minister turned author of apocalyptic fiction series Left Behind, and al-Qaeda leader Osama Bin Laden merged into a single unholy entity, beckoning the viewer in fundamentalist ecstasy.

Printed on top of these spreads using a computer-controlled pen plotter are graphics pulled from the pages of Libertarian survivalist manuals, DIY metal zines, end-times evangelical comics, multicultural global village clipart collections, and various marginalia ranging from the banal to the extreme. Like a paranoiac’s conspiracy wall, the millenarian anxieties of turn-of-the-century America are visualized in a tangled web of text and images, using the recent past as a lens for examining the mainstreamed conspiratorialist present.

The following is a selection of works from TIME with additional details and context behind some of the imagery. Not intended to function as a decoder ring to infer a specific meaning, but rather as a nod to the catchphrase of the terminally pilled: “Do your own research.” 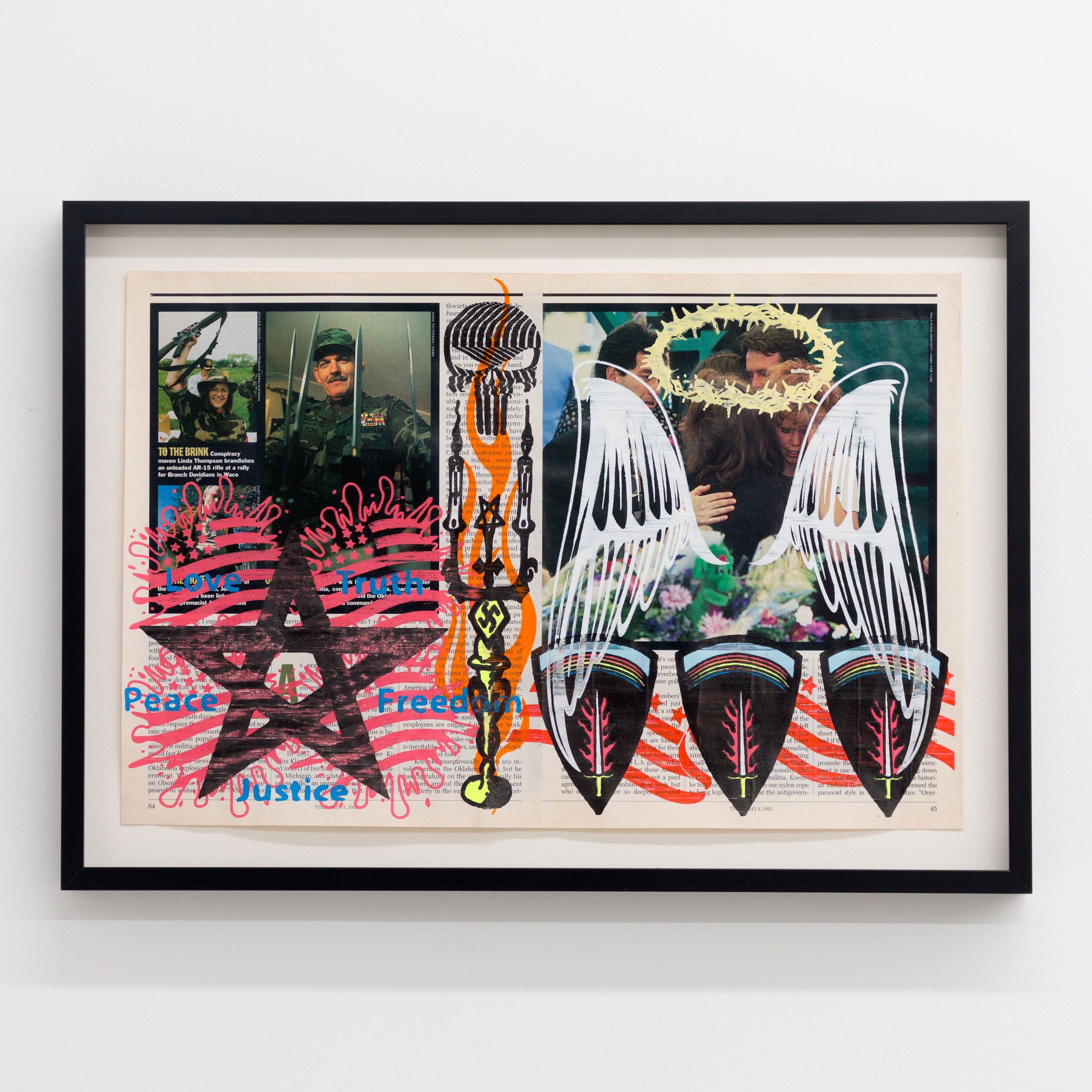 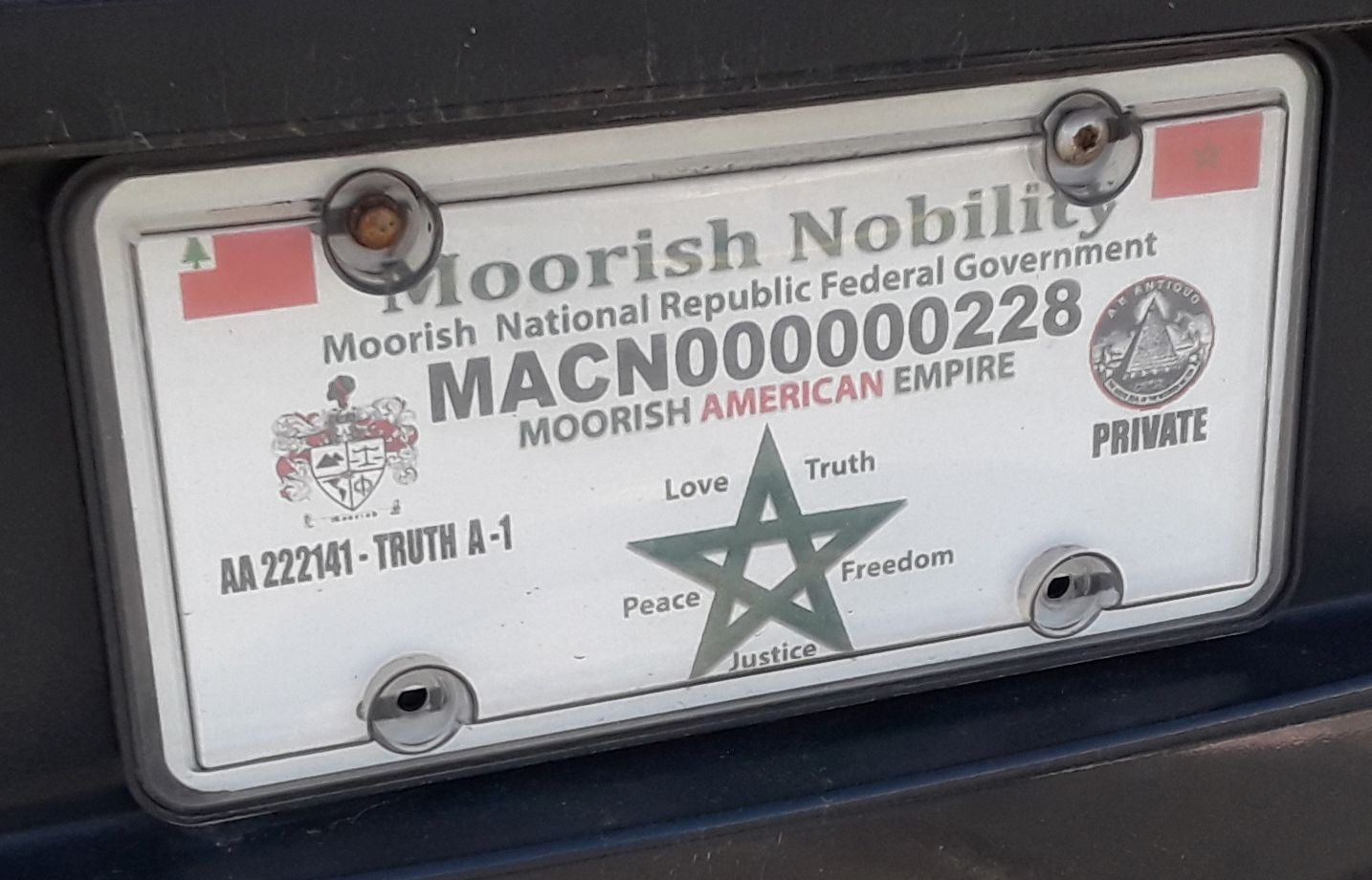 The Sovereign Citizen movement is a conspiratorial belief system for anti-government and tax protestor types that centers around the idea that the US government is wholly illegitimate, providing a get-out-of-jail free card for any federal law they personally don’t feel the need to follow. While the specifics of this illegitimacy are debated (mostly centered around the switch from the gold standard to fiat currency), Sovereign Citizens believe that if they conjure the right string of legal word salad or file a specific procession of paperwork they can live within their own common law legal system where the feds have no jurisdiction over them. There’s an entire genre of YouTube videos of Sovereign Citizens getting dragged out of their cars by police officers after belaboring an imagined legal distinction between “driving” and “traveling”, believing they’re not obligated to have a driver’s license or registered plates to drive.

Even though the Sovereign Citizen movement was developed by a Christian Identity minister with ties to the Aryan Nations, there exists a Black offshoot of the group called the Moorish Sovereign Citizens who believe African Americans are actually descendents of the Moors and therefore Islamic by faith. Naturally, this means they don’t consider themselves legitimate citizens of the United States and create their own bespoke versions of federal and state issued license plates, driver’s licenses, and other legal documentation, all with a Middle Eastern aesthetic flair. 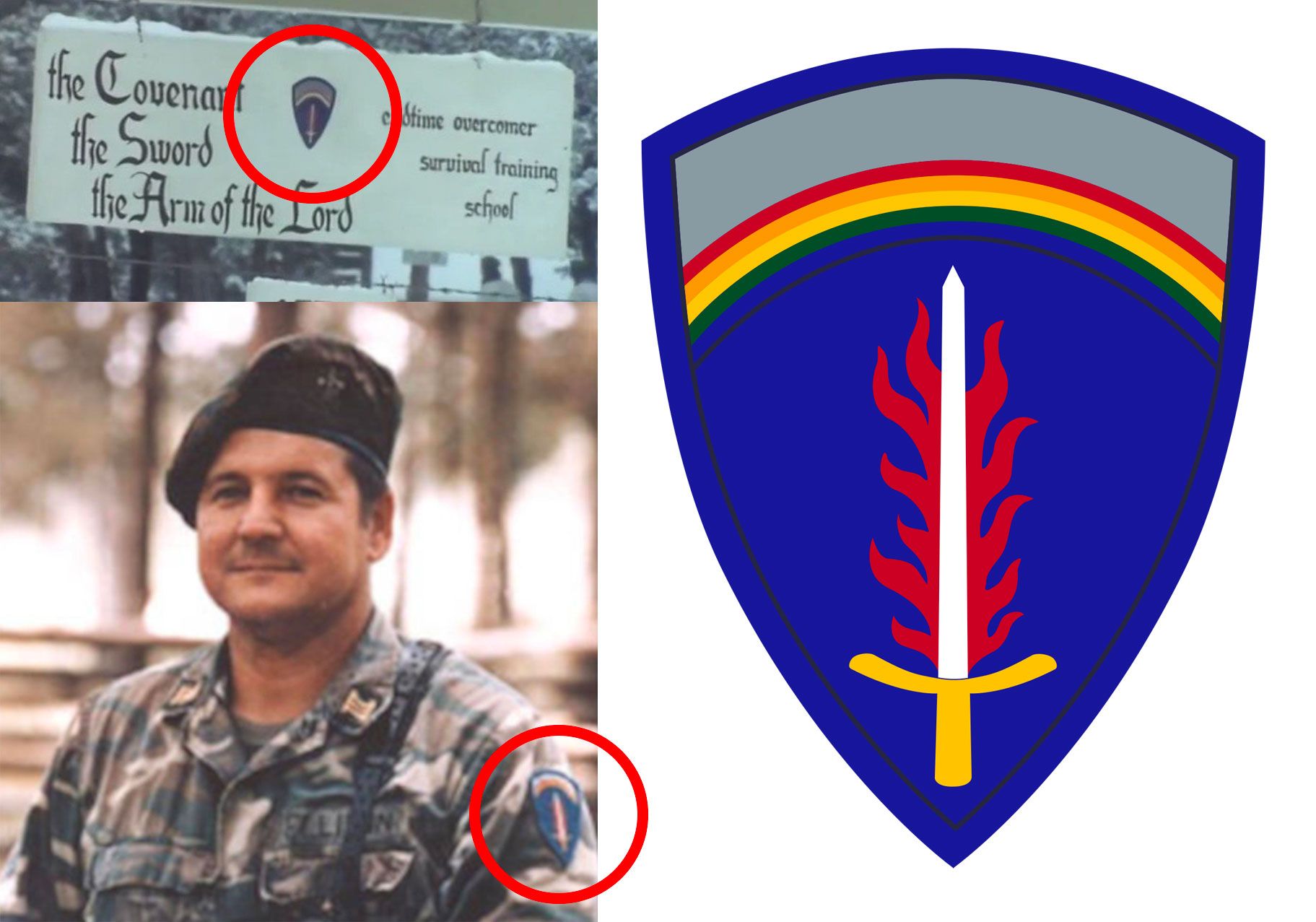 US Army Europe insignia appropriated by The Covenant, the Sword, and the Arm of the Lord

The flaming sword and rainbow insignia, originally used by the European division of the US Army, was appropriated by a militant Christian Identity and White Supremacist doomsday survivalist group with a name as long as their list of grievances: The Covenant, the Sword, and the Arm of the Lord.

The CSA lived on a compound in Arkansas called “the Farm”, tricked out with a small army’s worth of weapons and tactical gear in preparation for a violent overthrow of the US government. After declaring war in their 1983 manifesto “A.T.T.A.C.K” (Aryan Tactical Treaty for the Advancement of Christ’s Kingdom), the group built concrete bunkers, defense towers, and an entire residential training facility for guerilla war simulations dubbed “Silhouette City”.

Complete with empty prop houses, fake explosions, and streets staged with stop signs and burning cars, the footage of The Covenant, The Sword, and the Arm of the Lord running siege drills in Silhouette City recalls both the 1984 film Red Dawn and al-Qaeda training camp videos. 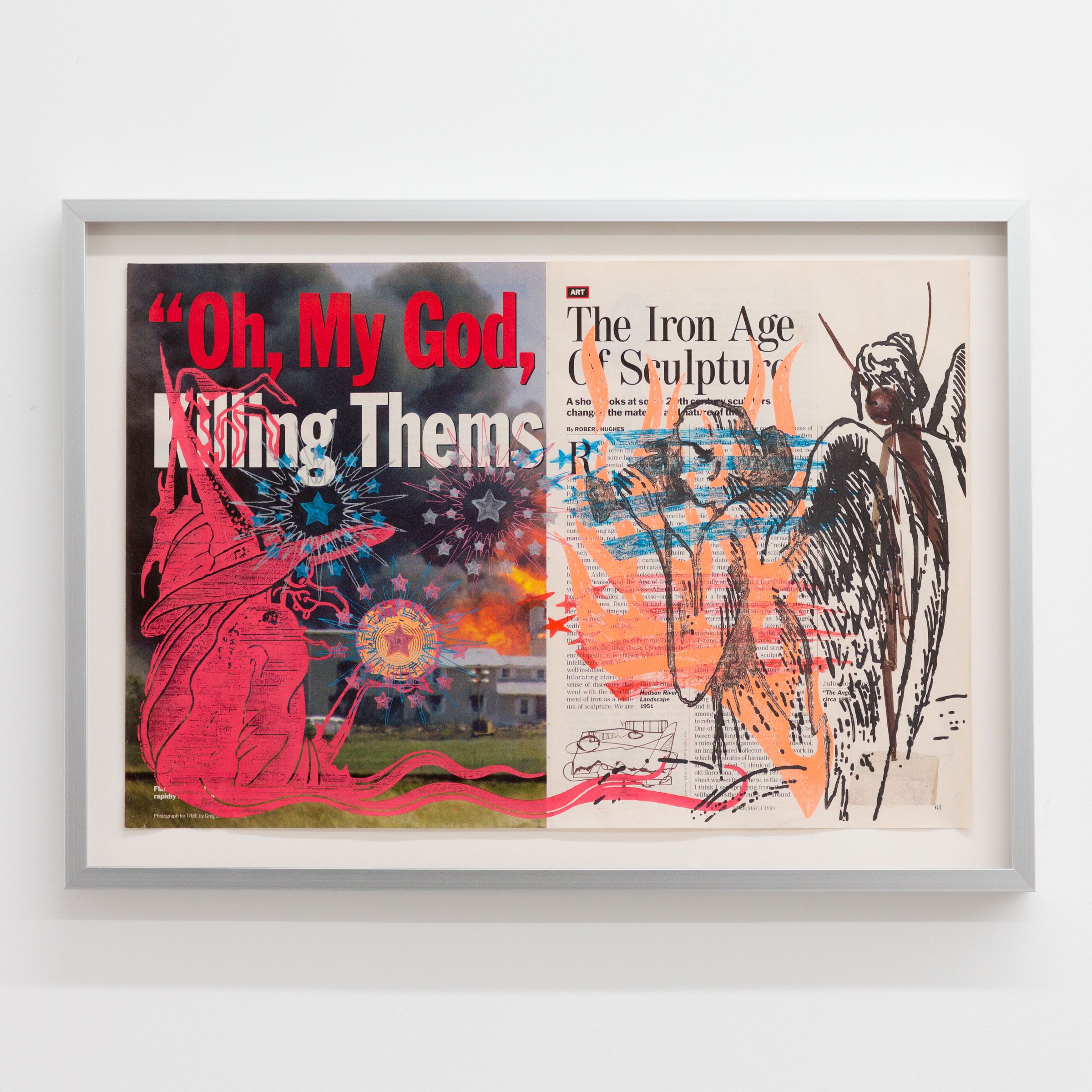 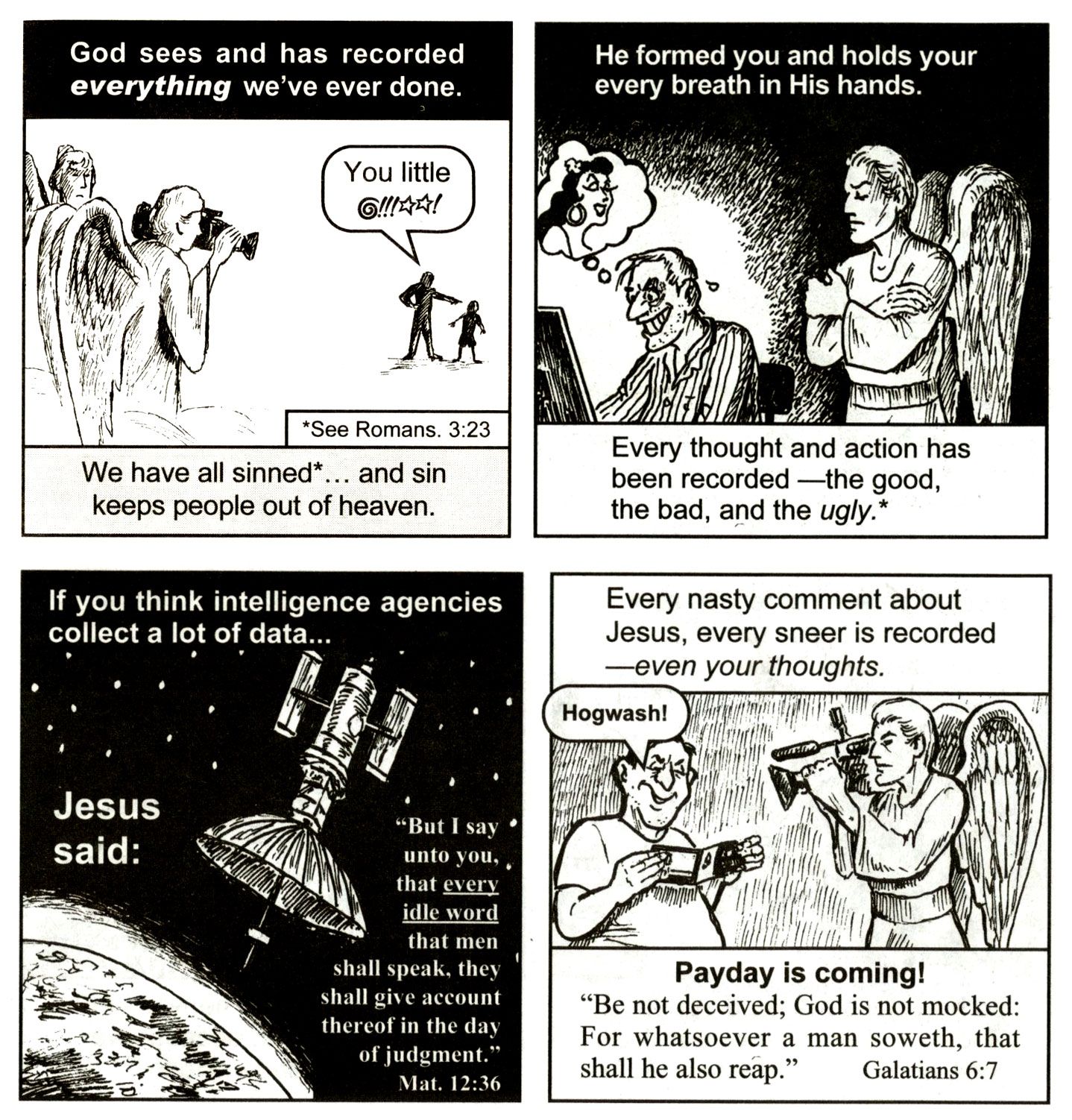 Chick Tracts are palm-sized religious pamphlets drawn by one Jack Chick, a reclusive, conspiracy-prone Evangelical Protestant who got his idea to prosthelytize to the world with fundamentalist Christian morality plays in comic book form from an anecdote he heard about the Chinese Communist Party. Famous in part for his anti-Dungeons & Dragons comics printed in the heyday of the Satanic Panic, Chick Tracts regularly featured anti-gay, anti-Muslim, and anti-Catholic storylines, with an overarching worldview that the Freemasons were actively ushering in a New World Order, all being orchestrated by noneother than Satan himself.

A recurring visual theme in Chick Tracts are angels holding video cameras, making literal the idea that God is recording your every thought and action for judgment upon arrival at the pearly gates. The paranoia-inducing angels serve as heavenly analogues of the surveillance state, or in retrospect as harbingers of the mass data collection that would follow in the wake of contemporary networked technology. 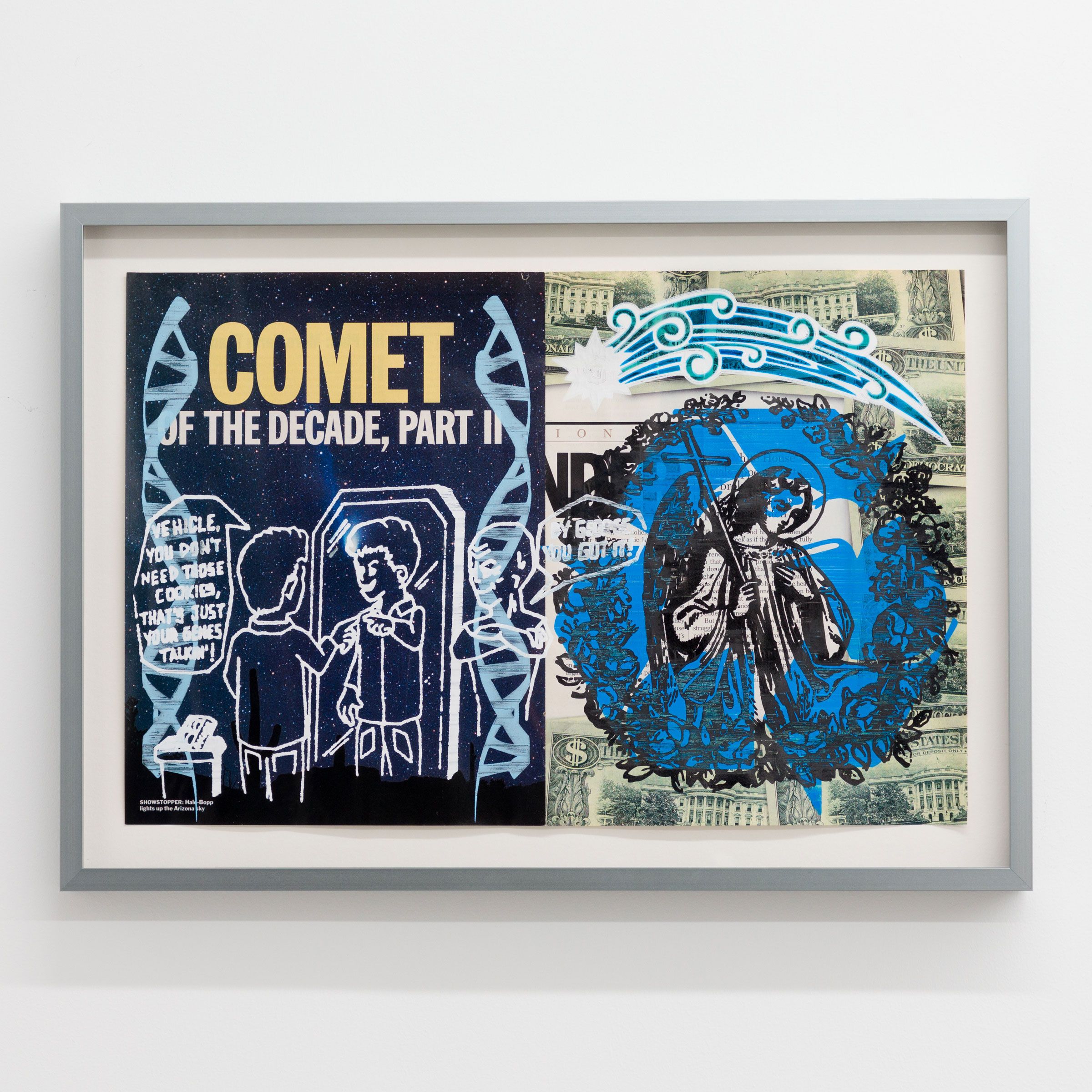 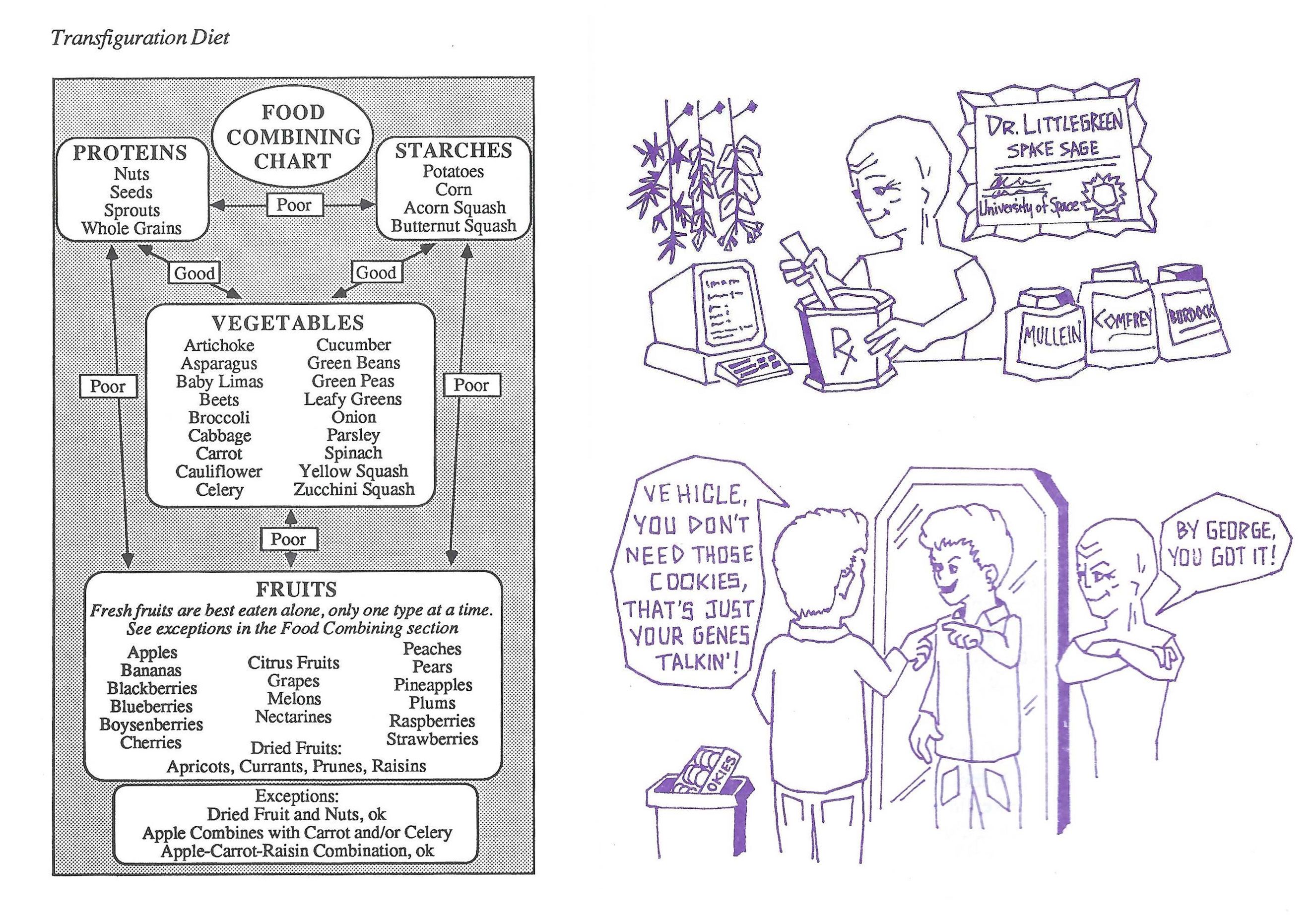 The Transfiguration Diet is a guidebook to spiritual transformation through fasting and a naturopathic, “mucusless” diet by the leader of the Heaven’s Gate cult, Marshall Applewhite, under the tongue-in-cheek pen name, “Dr. Littlegreen”. A nod to their religious teachings that combined ufology, New Age, and Christian millenarianism, the members of Heaven’s Gate would eventually commit mass suicide under the belief that they would collectively leave their human “vehicles”, aka bodies, and self-Rapture via spaceship to “The Evolutionary Level Above Human”, when the Hale-Bopp comet passed Earth in March of 1997.

A common control tactic used by leaders in cult-like systems is to restrict what and how much their followers can eat, usually done under the auspices of religious or spiritual fasting. While Applewhite was the rare exception who followed the same strict rules as his rank-and-file members, for most cult leaders it’s a perfect way to keep their followers weak and delirious, as well as a social proof of their willingness to put their health on the line for the cause.

Featuring a bald-headed extraterrestrial as the reader’s guide to salvation, Applewhite’s book encouraged followers to unlearn their desire for food through charming cartoons and detailed daily meal schedules. In part to help them disassociate from the carnal impulses of their human vehicle, denying the pleasure of eating made it easier to view their earthly bodies as an inconsequential vessel whose main purpose was to facilitate them on their way to intergalactic ascension.

Applewhite may have been dissassociating from his own homosexuality by developing a belief system that encouraged sexual asceticism, unisex buzz cuts and baggy Mandarin collared shirts, and, in some cases including his own, castration. By reframing it as neccessary for transcending into immortal androgynous extraterrestrial beings free of pain and want, he was able to create a structure where the denial of the sexual desires at the heart of his father’s rejection and the loss of his career as a music teacher became a central tenet. 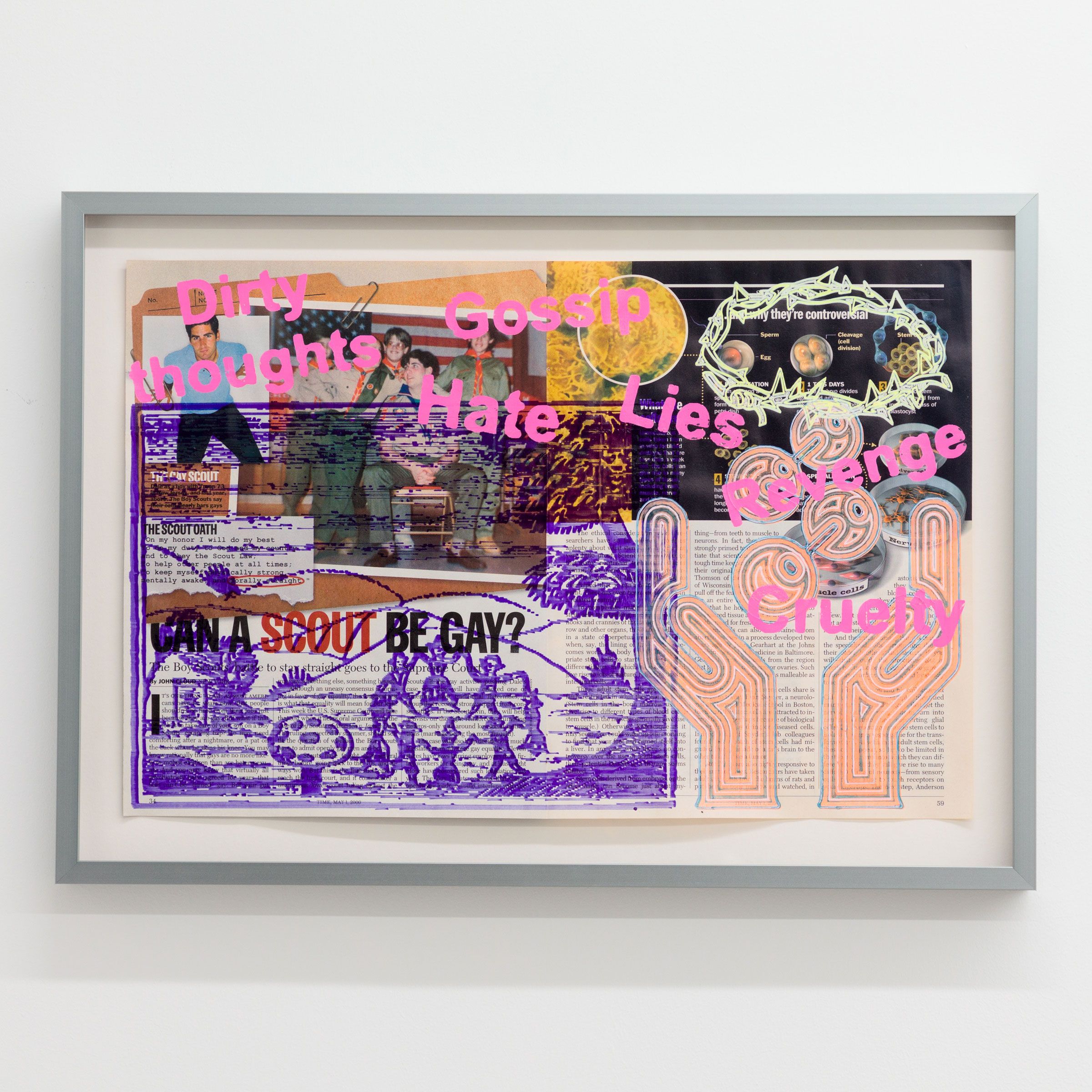 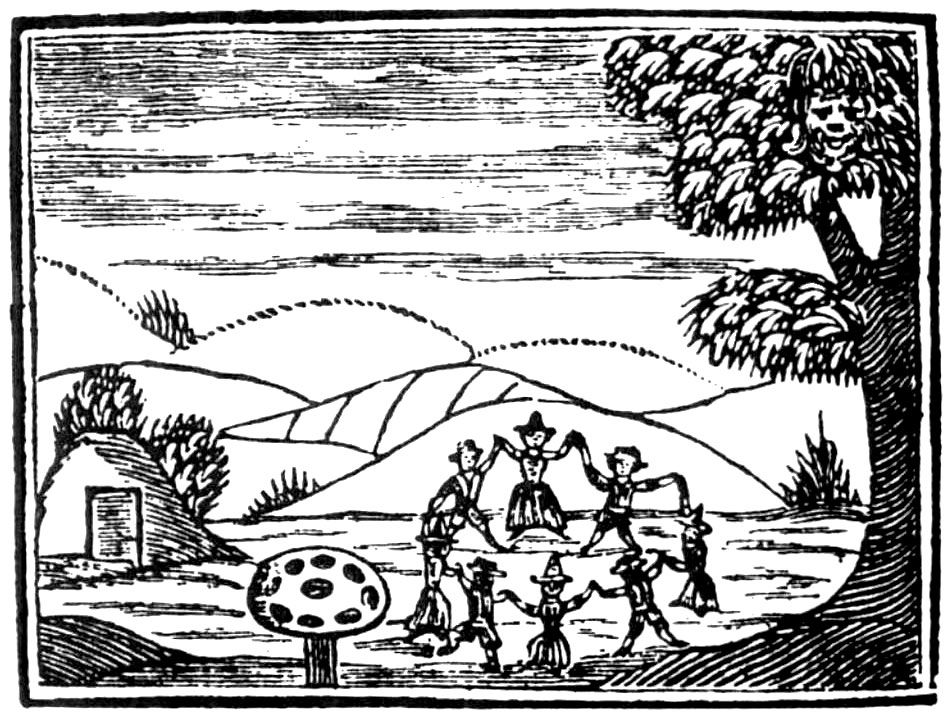 Woodcut of fairies/witches dancing in a circle by a mushroom, 17th century 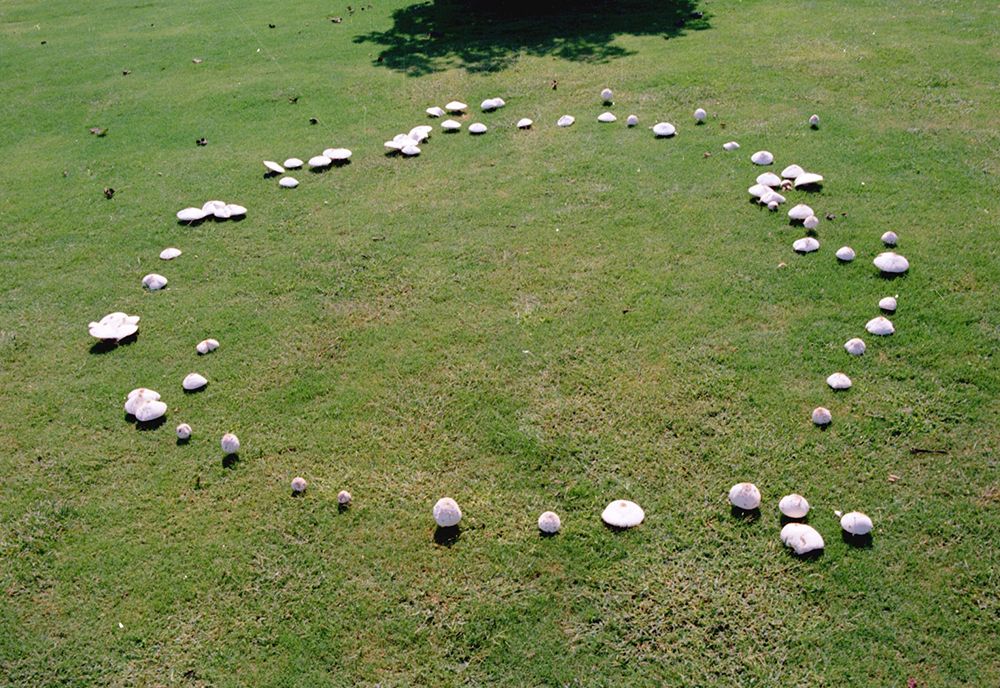 Fairy rings are a naturally occurring fungal phenomena that have been the subject of much folklore, art, music, and literature across the world for centuries. Seen as both enchanted places that could bring good fortune or, more often, as portals that would curse those that dared enter, the superstitions around fairy rings have differed greatly while reflecting the specific cultural context they arose from.

Created by the root structure of a fungus radiating outwards to absorb nutrients underground, fairy rings (alternatively called fairy circles, witches’ rings, elf circles, etc.) appear as rings of mushrooms or dark grass that can stretch up to 30 feet in diameter. A common explanation across most folklore is that the rings are created by witches, elves, fairies, or other supernatural beings dancing in a circle under the cover of moonlight, leaving the fungal froot loop for befuddled villagers to find in their wake.

Folklore like fairy circles serve not only as a bridge between the gap in a culture’s concept of nature and the limits of its scientific and perceptual technology, but also as a device for articulating moral and ethical values. In the Victorian era when the depiction of nudity was verboten, fairy circles became a popular subject for artists as they could still get their rocks off painting nude fairies and sprites without running afoul of cultural mores.

While most would consider us to have moved past the need for folklore in the modern era, the mainstreaming of the conspiratorial worldview has created a renaissance of bespoke narrative reality. Aided in part by the democratization of information on the internet and an erosion of trust in institutions, this choose-your-own-adventure style of tribalism serves more so to define in vs. out group identity than it does provide any kind of greater fidelity of truth.

The full series of work from TIME can be seen HERE and purchased as an art book from Inpatient Press.