you can do the macarena to any song

Part of a series on The Macarena 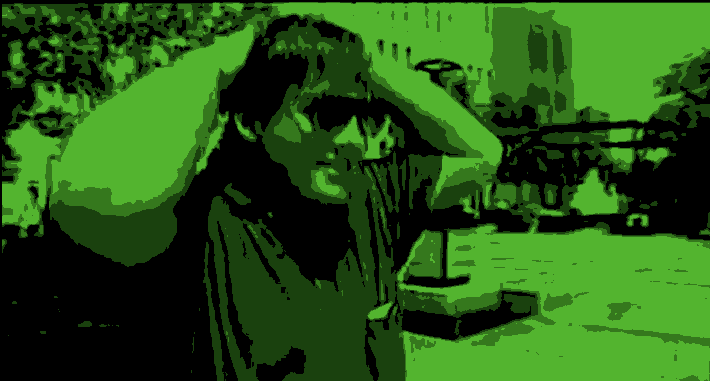 On June 5th, 2020, Los Angeles Times reporter Jenny Jarvie posted a video on Twitter of the National Guard dancing with protestors. It is a tight shot of the street. You can catch the smiling round face of one soldier. The next soldier beckons, and is joined by a brightly dressed woman of color: one of the protestors. Other protestors follow suit, but the group of Macarena-dancers remains predominantly the National Guard. She captions the video, “Countdown to curfew in Atlanta.” A couple of hours pass by, and the journalist/filmmaker Dan Cohen responds to Jarvie with a different Macarena video. This video was originally posted to Facebook in 2009. In it, the psyops officer is instructing a group of Iraqi children on how to do the Macarena. There is very little information supplied for why the officer may have been doing this, and the only context offered is the self-professed boredom of the trained psyops agents. Cohen is clear in his opinion that this is an already established pacification tactic, now being “used on protestors in the US to get them to abide by curfew.” The curfew he is addressing is one in response to the Atlanta protests, invoked by the mayor on May 31st, 2020. I’ll be focusing on the use of this globally successful 90s line dance within the 2020 Atlanta BLM protest, as well as footage of the Macarena used in US soldier/foreign civilian relations within the Middle East.

The neoliberal era has seen a breakdown of distinctions between the two primary American parties, forming a hegemony of corporate capitalist thought. In a world of “no alternative,” the polarization is actually heightened. People search instead for extreme and radical answers. It is of no help that the corporate capitalist media apparatus diverts popular focus onto the trivial, guaranteeing the formation of faulty conclusions. The deployment of such perspectives allows for demonstration only in a limited sense, and in spite of an incoherent set of motivations. By approaching this instability in a wider sense, we can acknowledge the failure to challenge the status quo and maintain optimism for what is preyed on. As the ability to mimic the Macarena is of a higher order than the grace with which we perform it, our ability to recall central points of culture signals to our position inside of a social group.

The situation in Atlanta is complicated by the fact that the Macarena was initiated by Amisha Harding, a protester and non-profit consultant and realtor. This twists the situation into a new dimension, one principally concerned with morals. Assessments reverse from describing the National Guard's potential for physical violence to the hailing of potential for their essential human qualities. In a way, those who interrogate this dilemma become worthier of alienation than those in possession of riot shields, guns, and batons. They are dismissed as paranoid, or antisocial. This trick works partly because of the instability and ununified definition of what actually constitutes an American daily life; a question contested from its inception and accelerated by the ever-increasing divide between the 1% and the rest of the country. While a regular citizen has one role, a soldier is able to occupy the category of both citizen and state enforcer. As one friend pointed out to me, the American citizen who dances is not afforded the decision to swap as readily between these poles as does the soldier who dances to de-escalate. By describing these soldiers as mothers, fathers, those who cook and clean and pick up the kids, the status quo is reified, and dangerously, places the worth and values of the National Guard before one’s own. In this reification of the status quo, calling into question a soldier’s humanity is to be against the daily lived experience of American life. I say “humanity” rather than “inhumanity” to emphasize the special moral arena with which these debates take place. In platforming everyone unconditionally as an individual, the progressive liberal mindset fails to see the powers behind the individual. There is actually another angle to the Atlanta Macarena, one presumably captured by a news station. It offers a bird’s eye view. The group of dancers become impossibly small next to a line of tanks and National Guard. This is opposed to the tight, portraitive view of the street offered by Jarvie. The protestor’s actions are imperceptive, but I don’t find them foolish.

What affords the National Guard the ability to move between a party dance and sheer might is a question of Occupy Wall Street’s legacy. As we approach its ten year anniversary, we can see how the political horizon has diminished into an endless and incremental reframing of discourse. At the time however, Occupy’s tools for amplifying voices clarified who it sought unity with and held a purposeful dissociation with the police. In becoming nominal champions of identity politics, the Democratic party evades discussion of material problems by redirecting our attention to an ambiguous moral struggle. The National Guard is able to dance precisely because it has become their job, as an authority to limit and describe the conditions of the American spirit. This is on top of acting as shadow protest organizers, planning the paths and routes for which the protestors may march. The state monopoly of violence therefore develops into the realm of an invisible, psychic violence.

Dan Cohen’s observation is not completely off-base. Rather, his mistake was in presenting his observation as empirically verifiable. Any amount of hard evidence, such as a document prescribing the Macarena as a deescalation tactic, only succeeds in a superficial easement of neurosis. Looking again at both videos, the most literal mind would only point out the presence of US soldiers with guns and tanks, and the people who are without guns and tanks. In both videos of Atlanta and Iraq, combat is being deemphasized. Whether you call it levity or building a “positive communal” association with subjugation, the goal of the National Guard stationed in Atlanta remains the same: for the curfew to be obeyed. That is not the only problem posed here. Any attempts to reveal how information is disguised from the American public through the use of more information runs a great risk. Jarvie’s version of the story is incomplete, as Cohen correctly senses. Rather than confidently addressing this felt absence, he moves into conspiracy. As Jarvie updates her post the following day by placing a protester as the initiator, Cohen’s major claim becomes decentered. The video evidence becomes a fraught route, and places Cohen at a crossroads in which he either moves further down this tenuous line of thought or concedes that he will never be able to keep up with Jarvie. Through the use of superior knowledge, the mainstream media reasserts the upperhand. This is all to say that even though Cohen’s intuition remains intact, his conveyance further complicates an already complicated situation.

As shown in the Twitter thread, once the moralizing tone is in motion, it is very difficult to go back. You may respond and say they were just lightening up the mood, without ever admitting that you gave the state authority to affirm and set the boundaries for your humanity. Cohen’s stance suffers in its ability to form a hard conclusion and for this reason cedes precious ground in its debate with the moral argument. The tension between Cohen’s proposal and the actual actions of the National Guard are useful to point out. It leaves it up to us to reaffirm, over and over, that a real and present monopoly on violence persists just as Max Weber theorized. The protestors were still hit with rubber bullets and teargas, with little recourse other than to kick teargas back at their assailants. The effective power of the Macarena remains, so long as the civilian recognizes and answers the call to dance.

The Macarena may not be the military-strategic form of central planning that Cohen suggested. Rather, it is a glimmer of potential for the collective unconscious as a force behind us as protestors, capable of arbitrating what we do and do not involve ourselves with. What future protestors should do is refuse to recognize the call, to treat it as a stale joke or a meme fallen out of fashion. Making use of an internal cultural literacy, this phenomena is employed by the National Guard in service of de-escalation. As the aforementioned friend points out, an individual who unwillingly participates in state power does so with their humanity. They do it even while they receive none of the benefits and none of their demands are met. In this instance, that is the repeal of curfew alongside a broader demand for police accountability. The Macarena functions as a contested site for these questions; sublime as a form of art that can come so near to a violence stubbornly rendered invisible.

The possibility remains open then, for a subcultural movement able to form its own Macarena⁠ —a virality on its own terms— that avoids both traps of conspiracy and of recuperation. This requires honesty around what we don’t know and a sustained investigation into what “the powers behind the individual” means on both sides. The popularization of the Macarena depends on the ease with which one can teach it. A line dance does not ask any virtuosity or grace of a given dancer, in fact that is besides the point. Instead one is judged on their ability to recall and echo the dance. The predefined nature of the Macarena is democratizing, able to onboard anybody through its lack of skill and variation. It is certainly possible that participating in the dance is all the energy a protestor has to give. After all, they are the mothers, fathers, those who cook and clean and pick up the kids, the one who operates the forklift that fulfills your Amazon order, the custodians, the kitchen staff, the informational laborers, the cashiers, the teachers, and so on.